The ex-works 2007 Aprilia 250cc Grand Prix racing motorcycle which was ridden to World Championship victory by Jorge Lorenzo is among the exotic machinery on offer in Bonhams’ auction, at the Stafford Classic Motorcycle Mechanics Show this October. 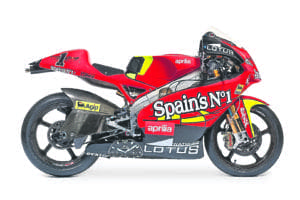 Starting his Grand Prix career at age 15, Lorenzo rode for the Fortuna-sponsored team. He remained with the team for the 2007 season, by which time they were receiving full factory support from Aprilia. Riding a machine supplied by the manufacturer, the one being offered by Bonhams, Lorenzo romped home to his second World Championship, with nine wins from 17 starts in the hotly contested quarter litre class.

The Aprilia up for auction is the original bike, and has remained unchanged and unridden since the end of the 2007 season. World title-winning machines are always a rare treat at auction, but one ridden to victory by such a charismatic and acclaimed champion is truly unique.

To find out more about the Classic Motorcycle Mechanics Show – or to save money when booking your tickets in advance, click HERE, or call 01507 529529.