Birmingham’s ‘lock it or lose it’ campaign proving effective

Following an increase in the theft of powered two wheelers from Birmingham City Centre during the early part of the summer, a ‘lock it or lose it’ campaign was launched – and it seems to be working. 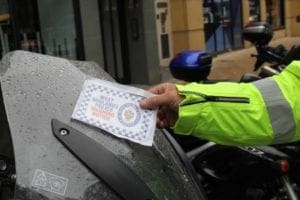 The campaign is being delivered by West Midlands Police, in partnership with the Motorcycle Industry Association’s MASTER Security Scheme.  It aims to encourage riders to consider additional security when parking in the city’s theft hotspots.

Police and traffic enforcement staff in Birmingham have spent the last few weeks identifying motorcycles and scooters without additional security and sticking a polite reminder letter on bike seats, to encourage riders to consider extra measures to deter and slow down thieves.

A survey of parking bays in the Cathedral Quarter in the city during early August, when the campaign was launched, showed only 40% of PTWs were protected with a chain, disk lock, or similar device.  Police reviewed the same parking bays this month and have reported that over 90% of machines are now protected by additional chains and other security measures.

PC Paul Ennis is delighted by the reception of the campaign amongst the two wheeled commuting community:

“People can get a little defensive when they are approached by a Cop, but I have been very impressed by the very supportive comments and gratitude shown to us all, as we deliver this very important message.  It has been a really positive experience. When we set out on this campaign, we had one simple objective: to make riders aware of the risk of theft when parking a motorcycle and to use some additional security.  When we started this, the majority of motorcycles in this area were inadequately protected.  Today the majority are well protected!”

The messaging campaign will continue into the autumn to keep reminding anyone new to the area to lock their bikes.