Valentino Rossi is hard at work, after breaking his tibia and fibula in an Enduro accident at the start of September.

The surgeon who operated on Rossi predicated a recovery time of well over a month, and expected him to be side-lined for around 40 days, which would have effectively put an end to his Championship campaign.

But, the nine-time World Champion returned to the fold at the Aragon GP, just 21 days after the break, missing only his home round at Misano. He competed with the help of a thumb brake, pioneered by Mick Doohan as went on to win five consecutive World Championships between 1994 and 1998.

Rossi finished in 5th place after a courageous display at the Spanish circuit, and he’s been training hard ahead of the Grand Prix of Japan at Motegi on October 15th.

Here’s a picture that ‘the Doctor’ has shared on Instagram, as he puts a Yamaha R1 through its paces at Misano. 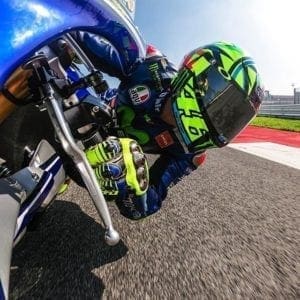