Scotland Yard has unveiled a handful of new tools to help in the battle against bike theft. Met Commissioner Cressida Dick announced the new tactics today, claiming they were already making a difference with a fall in the number of moped offences since July. 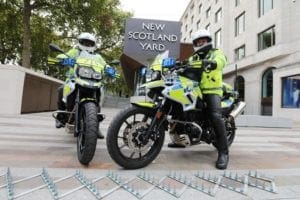 Metropolitan Police have commissioned four specialist off-road ready BMW F700GS bikes, in addition to new DNA sprays and mobile stinger devices, in the fightback against moped gangs at the centre of the crime epidemic spreading the UK.

Ms. Dick also urged London’s communities to “mobilise” and “channel their outrage” against the moped thugs to make the streets safer. She said: “I have been clear that tackling violence is my priority. I was angered by the apparent perception amongst some criminals that they could operate with near impunity, committing strings of offences using scooters. We have brought all our tactics and specialists together to use every ethical option to put a stop to the rise; arrest those responsible; disrupt offenders; dismantle the criminal markets that make these offences lucrative and change the public’s behaviour to make them a part of our effort.”

The new BMW’s will be ridden by highly trained motorcycle officers and will be used to set up ambushes for moped thieves, rather than for pursuit purposes. One source said: “They will be able to get ahead of moped gangs and set up traps using the mobile stingers or the DNA spray. It gives us much greater flexibility and movement.” 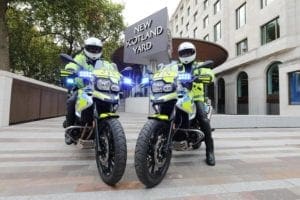 Police have already begun using the DNA spray – which is sprayed on suspects, who cannot be chased for safety reasons, and can be picked up under UV light if they are later arrested. Impressively, the spray can link suspects to moped crimes committed weeks earlier.

The action follows the recent surge in the number of moped or scooter related offences – but, today the Met said the latest statistics showed a 25 per cent reduction in the number of powered two wheel bikes stolen in the last six months to the end of September. There was also a 24 per cent fall in the number of moped related crimes over the same period and rising arrest rates and convictions of prolific offenders. That’s not to say the Police have it under control, but the new tactics seem to be working.

The Met also revealed it is using tactics successfully deployed by the Trident Gangs team to respond to scooter offences – targeting moped riding criminals for other offences where possible. Officers are also manning a 24/7 police control room to watch for scooter offences anywhere in London and co-ordinate an immediate response to tackle them.

Ms Dick said: “We know that our criminal cohort committing crime on scooters also carry knives, have links to networks who handle stolen property and who deal drugs. So if you are a persistent phone thief – using a scooter to commit your crimes – and we can prove your involvement in other offences, such as drug dealing, you will be arrested. This is where the public can help us. I want to mobilise communities, to channel their outrage as part of a joint effort to make our streets safer. Look after your belongings, follow our security advice and tell us about the people who are responsible for crime in your communities and help us tackle them.”