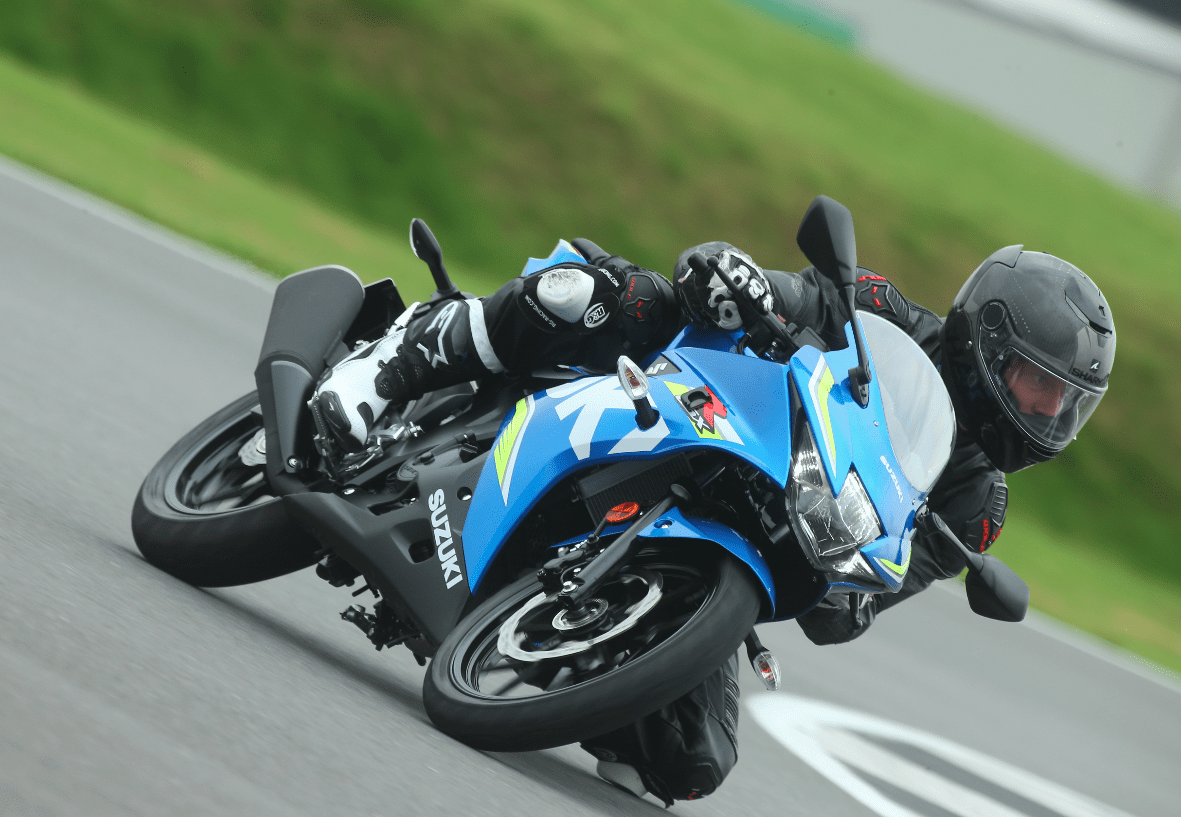 When I was 16 and rode around on my 50cc Suzuki S, all I dreamt about was a 125cc sportsbike. All the cool kids were riding them. There were Gileras, Hondas, Cagivas and all manner of other exotic – and oh-so-unattainable – bikes on the roads. But I never got one. The price of a bike alone was too high, and the extortionate insurance fees on top of that were the final nail in the coffin. So I carried on pootling along on my little Suzuki instead. I managed to get over the whole affair without being too traumatised, but it left me itching to ride those beautiful little sportsbikes.

The European press launch of the Suzuki GSX-R125 and GSX-S125 finally offered me a chance to scratch that itch. It might have been a quarter of a century ago that I hankered after these kinds of bikes, but as I jumped on the R at the Silverstone Stowe circuit I was immediately reduced to that little boy who finally got his toy.

Was it worth the wait? Too right it was!

On the right track with the GSX-R125

With the sporty new GSX-R125 and its naked GSX-S125 counterpart, Suzuki wanted to create A1 licence-friendly bikes that are lighter, more powerful, cheaper and more accessible than the competition, and aim them at teens and first-time buyers. The two bikes share the same engine and chassis, with the only differences being the fairings and handlebars, as well as the flashy keyless ignition on the R, while the S relies on a good old-fashioned key. 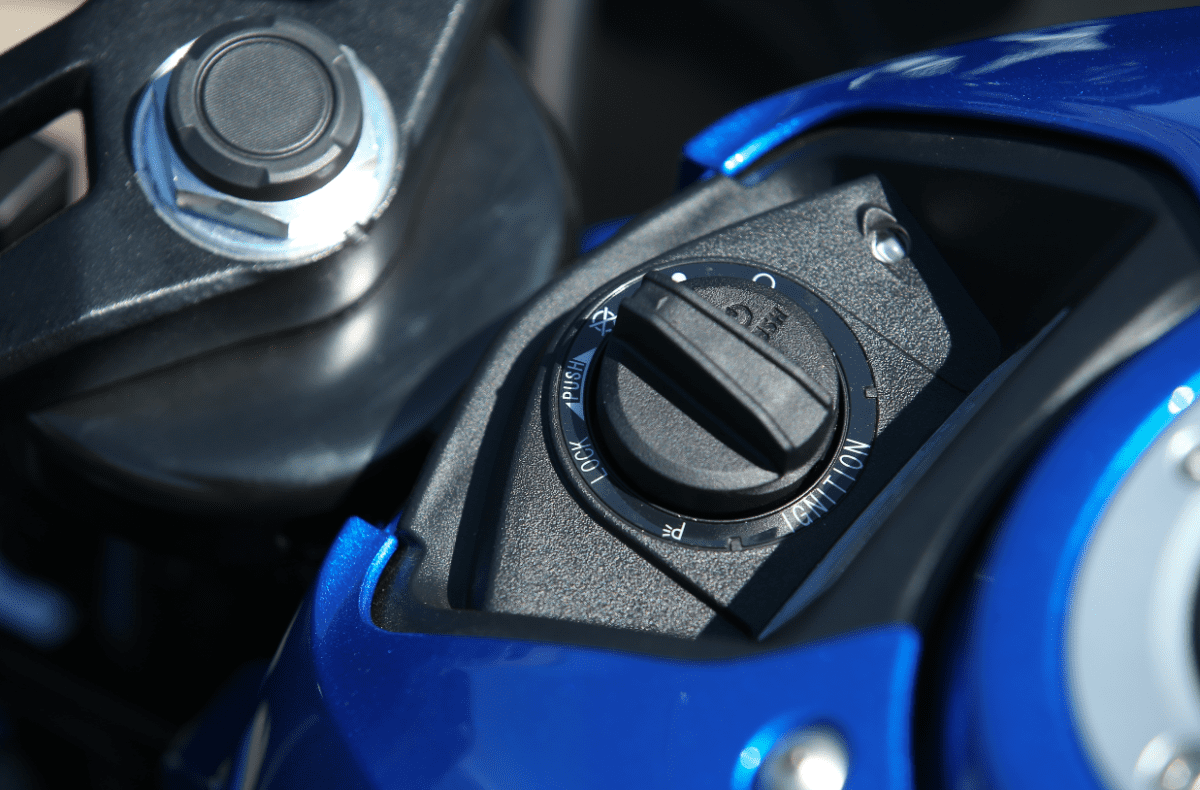 The engine is brand new and everything from the bore and stroke ratio (62.0×41.2) and lightweight pistons to the large 4.3-litre airbox and the Euro 4 compliant exhaust system has been designed to get the most out of the 125cc four-stroke, single-cylinder, liquid-cooled, DOHC engine. The result is peak power of 14.6bhp at 10,000rpm, and 8.48lb-ft of torque at 8000 revs.

Riding the GSX-R125 on track, the power delivery felt smooth and predictable, with a good level of pull across the rev range.

The bike feels surprisingly stable for such a small thing, with suspension and brakes both adding to the competent feel. The only problem I had was that the front brake lever is not span-adjustable, which made two-fingered braking difficult without crushing the fingers resting on the grip. 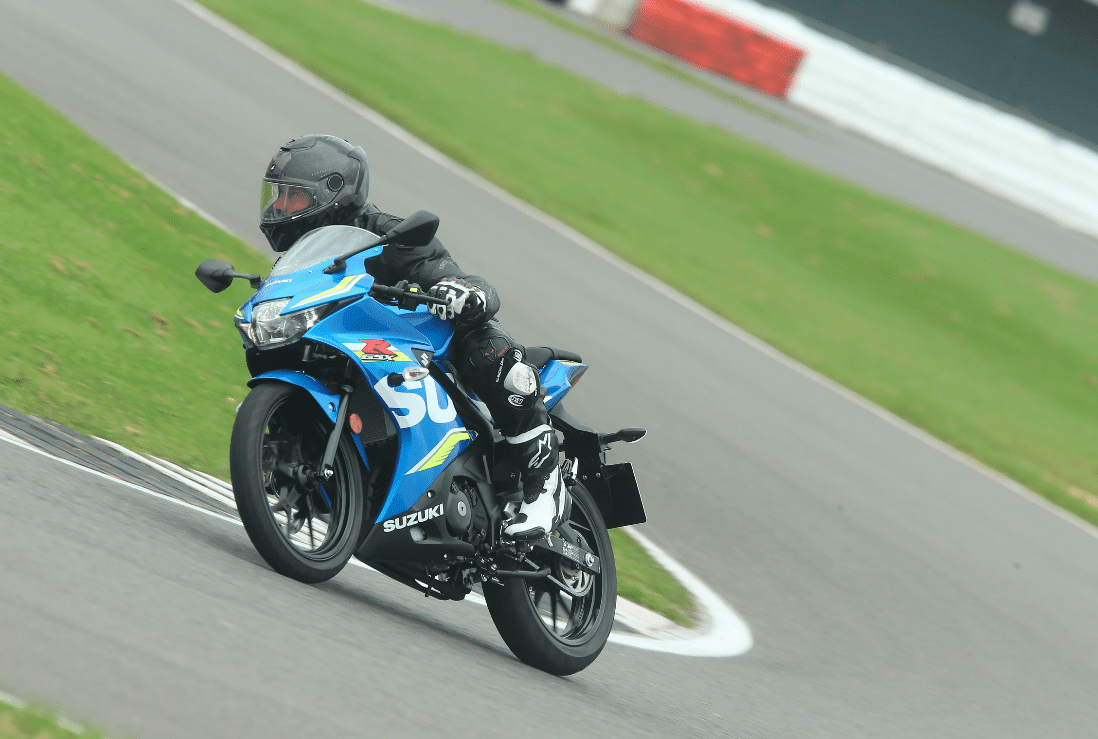 The ergonomics of the GSX-R125 are quite impressive. The seat is low (785mm), there’s plenty of leg room, and although the riding position is sporty, the bike still feels comfortable.

After a full day of riding the GSX-R125 on the Silverstone Stowe circuit there’s very little that I can criticise: the bike handles and performs well within the restraints of the category, it’s confidence-inspiring and fun to ride, and it looks like a proper sportsbike. If the bike was mine, I would fit an aftermarket span-adjustable brake lever. Other than that, the bike’s good to ride as it is. 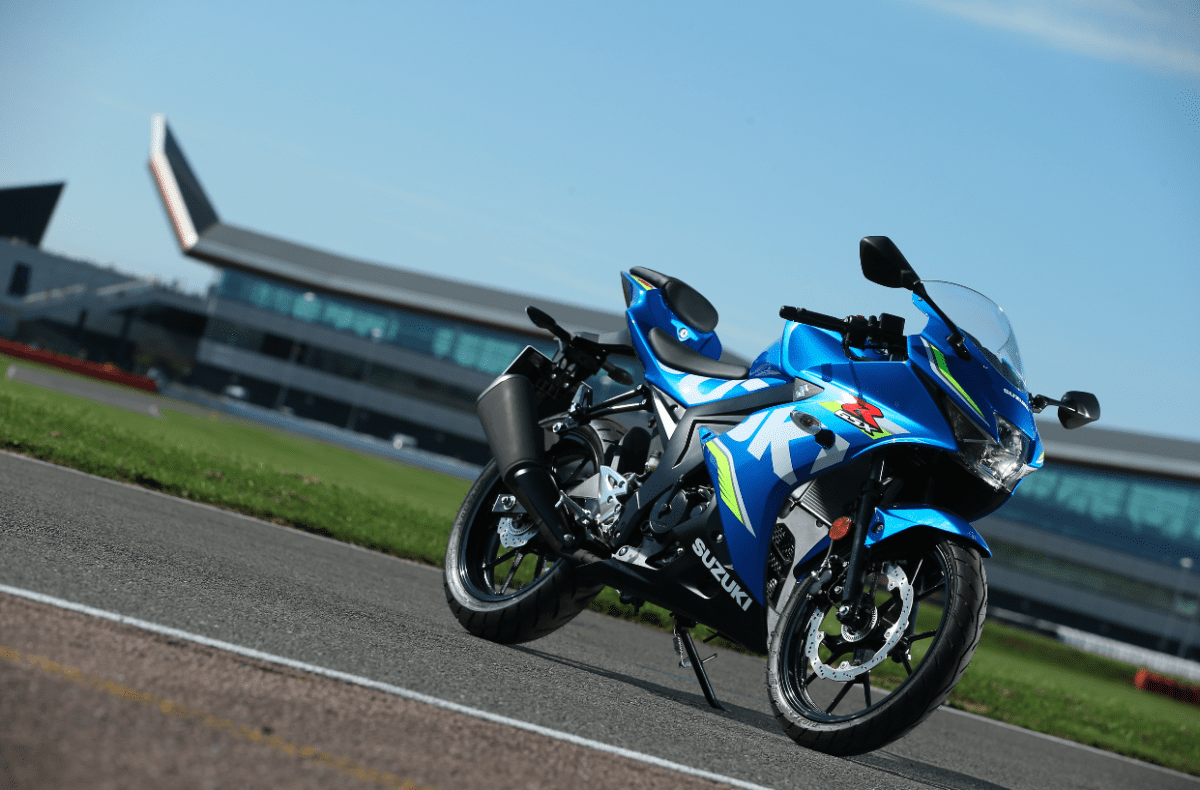 After squeezing everything we could out of the R on track, the next day it was time to jump on the S and see how the package works on roads.

The same good manners that the R had shown yesterday were evident in the S too. There was a good level of acceleration, and the bike reached 60mph rather quickly. From there it was a bit slower to reach the top speed, which according to my dash was 74mph (flattening yourself on the tank rather than sitting bolt upright makes a big difference with this level of power – no comments about the rider’s weight, thank you very much). 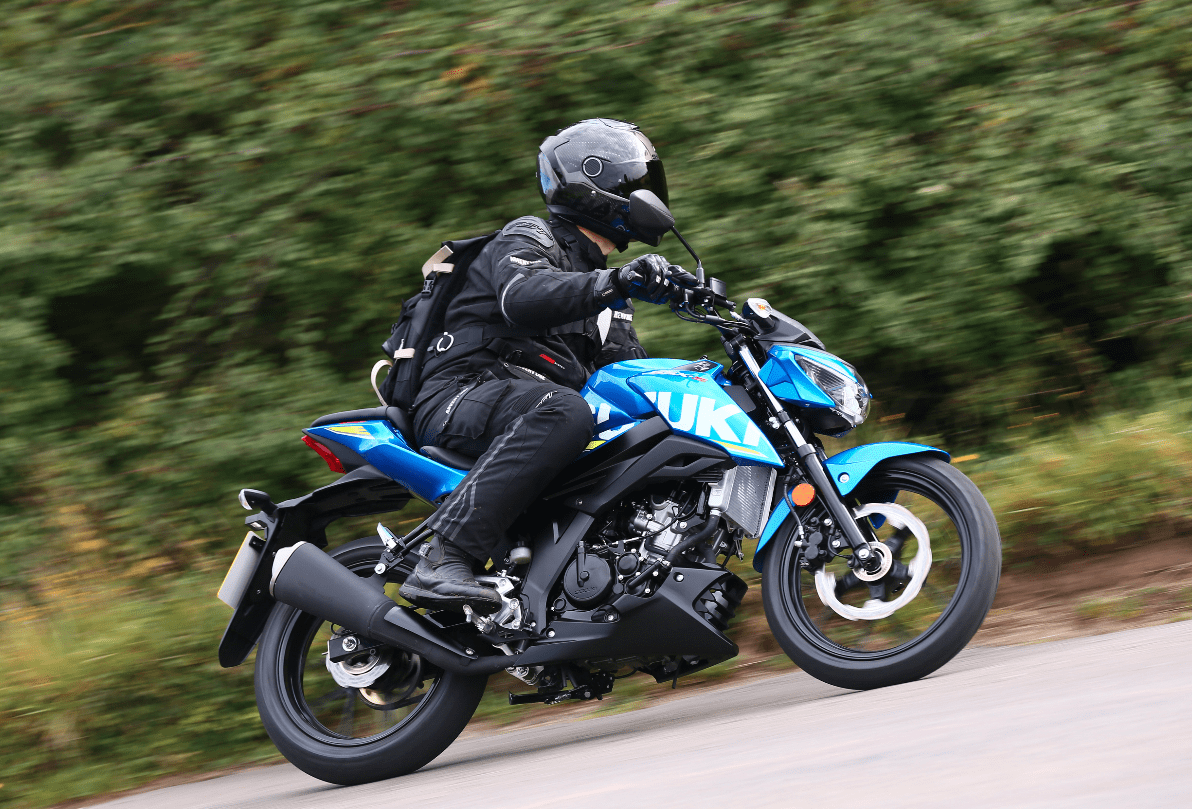 The level of power is more than adequate in towns, and the S manages to keep up with traffic on fast A and B roads too. Overtakes at anything above 50mph are a bit tricky, but not impossible.

Claimed fuel consumption is 122mpg, meaning nearly 300 miles from a tankful. At the end of our spirited test ride the dash showed 73.1mpg, but with a more sensible pace that figure would surely be significantly higher. 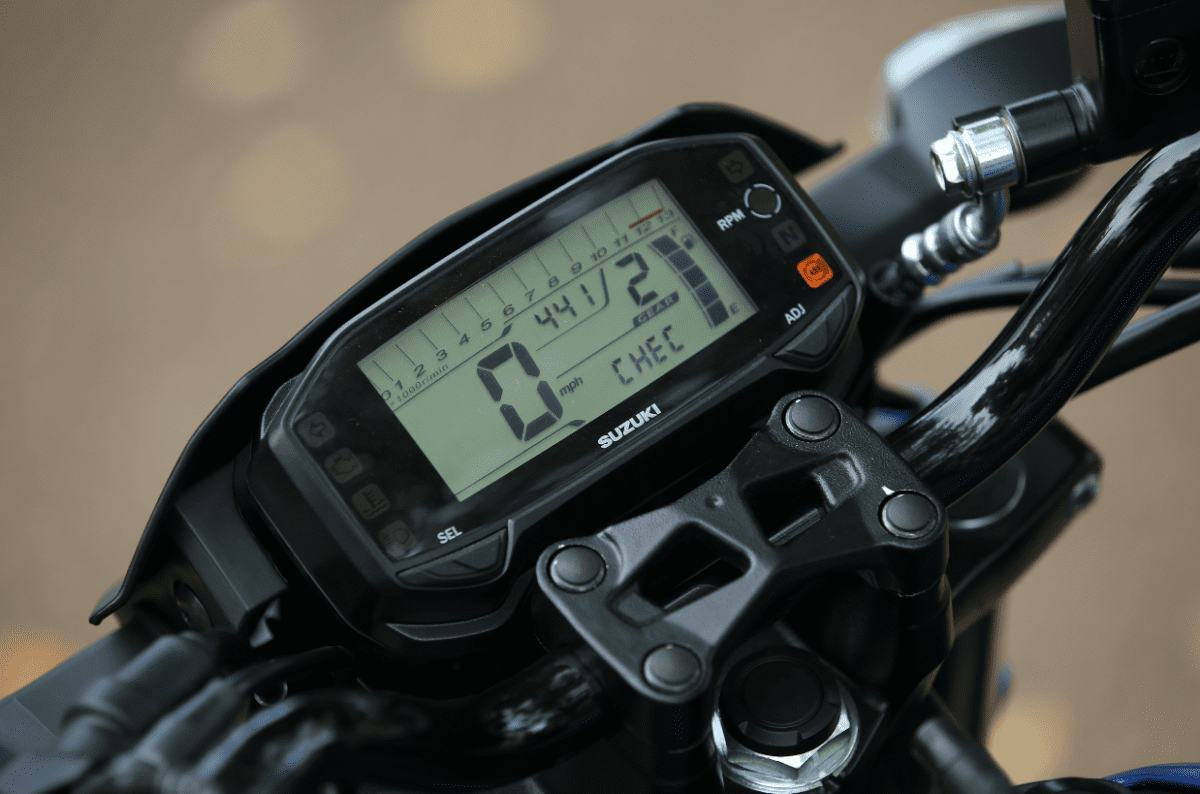 Suspension should be identical between the two bikes, but the front felt softer on the GSX-S125 for some reason – perhaps because of the different riding position? It still handled very well (which is just as well as the suspension is not adjustable on either model, front or back), and coped well with the bumpy country lanes.

Because of the upright riding position and the wide bars, the S is easy to manoeuvre around, making it a very pleasant bike to ride both in town and out on the open roads. If you don’t fancy the more committed riding position of the R, this is a great all-rounder – it’s just as much fun as the R, and looks good too. 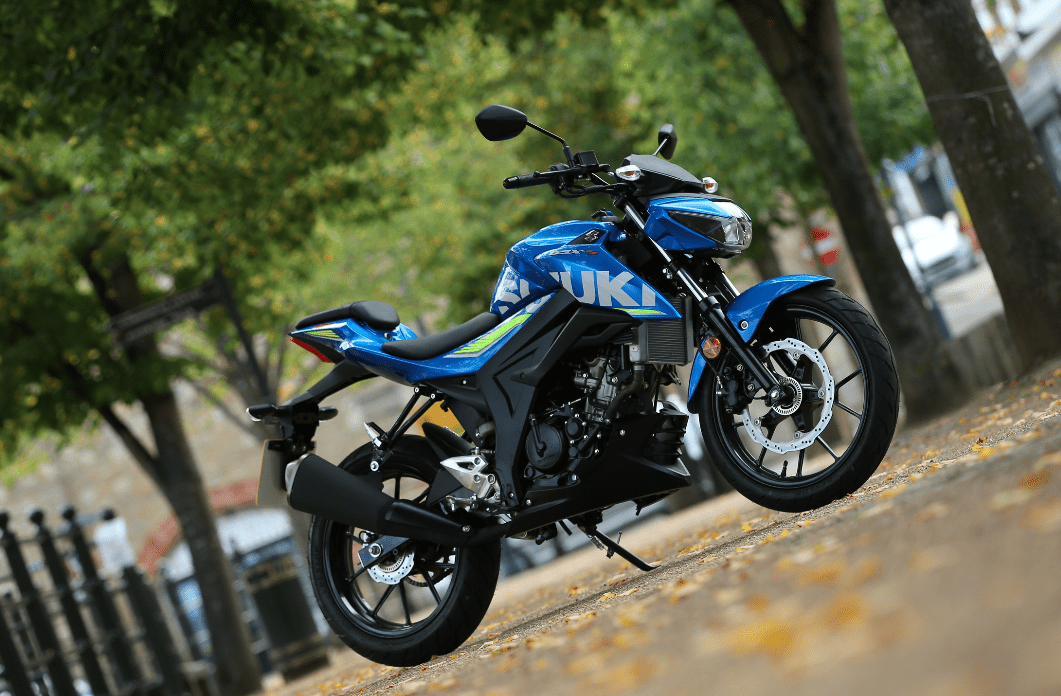 Are they good enough to tempt the market?

If the design brief was to create powerful, lightweight, accessible and affordable 125cc bikes, Suzuki has pretty much hit the target. The GSX-R125 and the GSX-S125 are both right at the top end of the A1 performance levels, and they are easy and fun to ride.

With prices starting at £3699 for the S and £3999 for the R (with an extra £100 in both cases if you want the bike in the GP blue colourway), they’re a lot more than your average teenager would be able to fork out. However, while that was an insurmountable problem when I was a teen, the clever financing options available now mean that you could buy one of these bikes and make monthly payments not much higher than those of a premium mobile phone contract. Is that going to be enough to get teens on these bikes? I certainly hope so – otherwise they’ll be bought by old men like me trying to relive their lost youth! 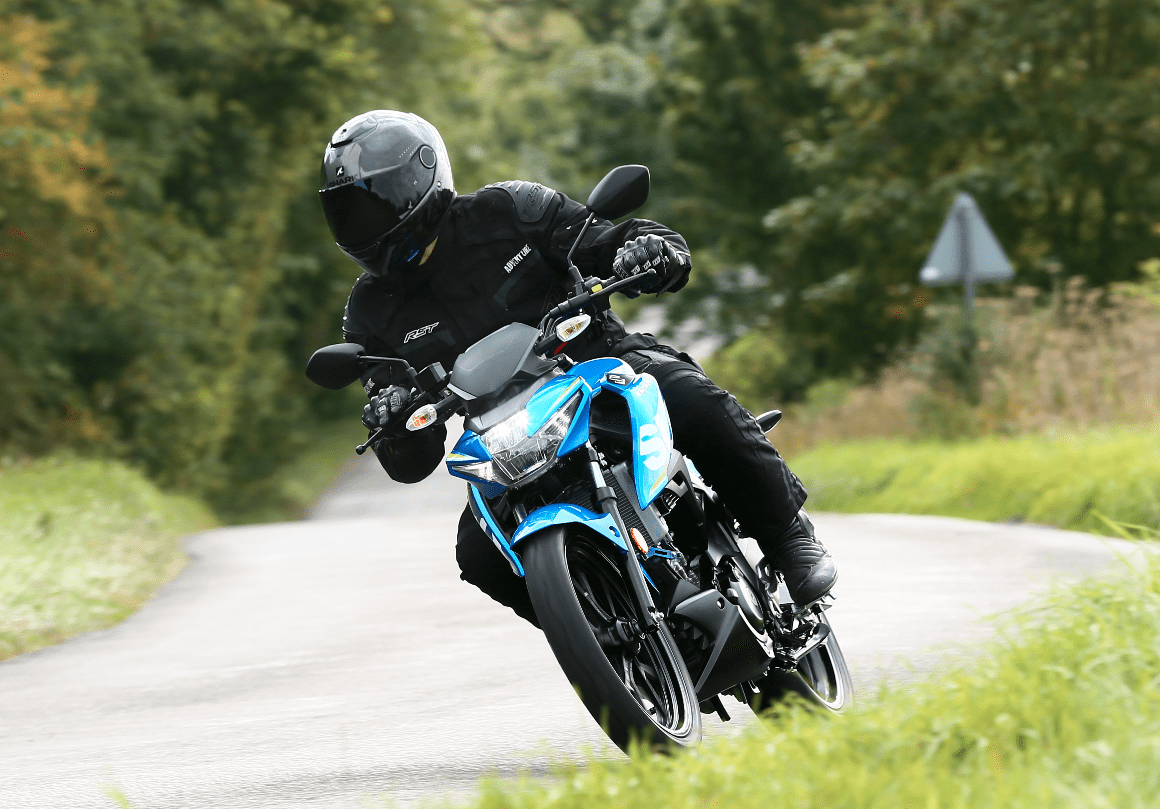 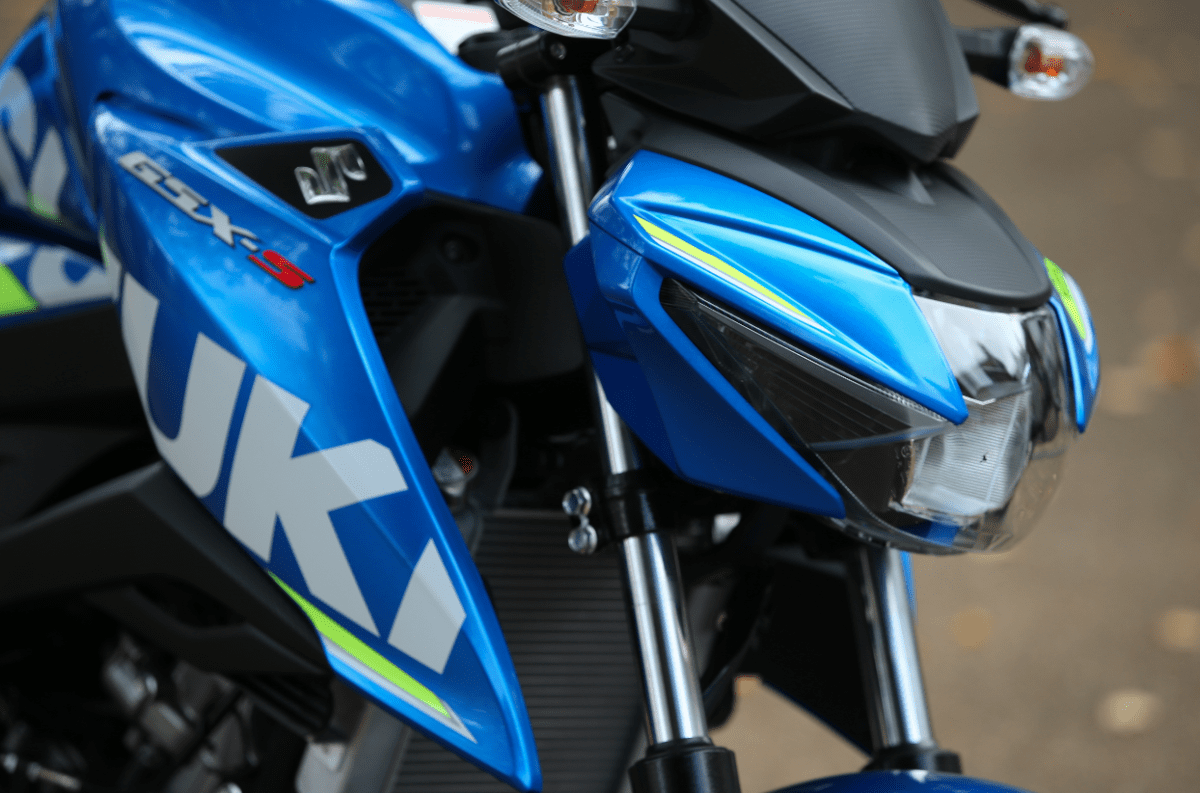