Motorcycle action on the set of Spiderman spin-off ‘Venom’

Photos have emerged from behind the scenes of Sony’s latest Spider-Man spinoff, Venom – and from what we can see, it looks sure to be action packed. The snaps we are particularly interested in show Venom’s alter ego Eddie Brock riding a motorcycle that’s being lifted into the air by a harness, while a nearby vehicle is on fire.

Here you go. #EddieBrock, and his motorcycle that flies… pic.twitter.com/kSHv41tDV6

Tom Hardy is playing main man Eddie Brock – but in the images above, it looks like his stunt double is performing the scene as opposed to the actor himself.  The cast also includes Riz Ahmed, Michelle Williams, Jenny Slate, Reid Scott and Scott Haze – plus, Woody Harrelson is in talks to join the film too. 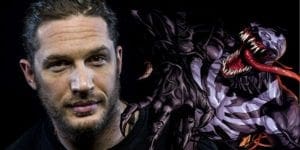 Interestingly, the film is completely separate from the Marvel Cinematic Universe and won’t feature Tom Holland’s Spider-Man, in line with Sony’s plan to launch a brand new cinematic universe featuring Venom and other Marvel characters. Venom is expected to make it to cinemas in October 2018.