Skully back in business with its updated AR smart helmet

The Skully smart helmet project was first launched back in 2013, achieving fame and fortune with its record-breaking crowd-funding project – but three years down the line Skully were having a tough time of it, folding before making it into full production. 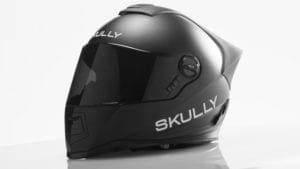 Thousands of riders backed the project early, contributing $1,500 to get their hands on one of the first smart helmets to feature a built-in rear camera and Head Up Display (HUD) unit. Only a handful of helmets were ever produced, so many backers were left with lighter pockets, and no new hi-tech helmet to show for it.

Now for the good news. Ivan Contreras, CEO of GasGas, best known for their world-beating trials bikes, has swooped in and snapped up the remnants of Skully, rebranding the venture as Skully Technologies and launching an updated version of the Skully AR-1 helmet, now called the Skully Fenix AR.

The ‘new’ Skully Fenix AR helmets feature pretty much all the tech from the original version, including the centerpiece 180-degree rear-view camera, a small full-time HUD display under the right eye, and a typical spread of smart helmet features, including music playback, phone connectivity, navigation and more.

The helmet now works much more closely with your smartphone (via a dedicated app) – though the rear camera and HUD still work by themselves if you feel like leaving your phone at home. The system will run for four hours on a single charge, and is charged using a micro-USB, so recharging using a portable charger on the fly is a simple solution for longer rides.

Best of all, Skully Technologies has pledged to “Make It Right” to initial backers of the AR helmet. That means, if you paid for a Skully helmet in the original Indiegogo crowdfunding campaign, the new Skully team will ensure you get your helmet – despite having no official obligation to do so. It’s a fantastic gesture that will go a long way to repairing the damage done by the old Skully set up. Skully Technologies say they have a database of those who pledged and paid, but be sure to contact them if you’re in that group.

The price will be $1,899 (just under £1400) for the standard version of the helmet, and there’s also a carbon-fibre model in the works. Units are expected to be available this summer. For more information, visit: www.skullytechnologies.com