Held each year since 1978, the Dakar Rally is an event like no other. With sections containing treacherous rocks, vast open deserts and hundreds upon hundreds of kilometres of untamed wilderness, the Dakar Rally pushes the best drivers and riders to their limits as they use everything from nimble motorcycles to big rig trucks to cross the expanse. Sounds awesome, right? That’s because it is. 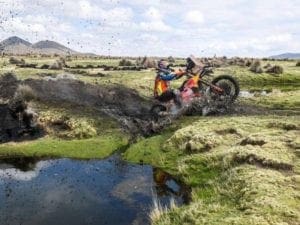 For its 40th edition – the 10th to be held on South American soil – the Dakar passed through Peru, Bolivia and Argentina for what is being described as one of the most challenging Dakar Rallies held outside of Africa. So, if you regret not paying more attention while the racing was on, you’re in luck – the Dakar media bods have just released a brilliant video that summarises the 14 stages of the 2018 Dakar Rally from a motorcyclist’s perspective.