Ben Spies won’t be making his 2018 Kenda AMA National Enduro Championship Series debut next month, after suffering a number of injuries, including several broken bones and a collapsed lung while riding off-road in Texas last week. 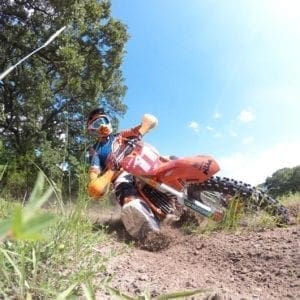 Spies said: “I sunk into the face of a jump and knew right away I was hosed,” Spies said after he was released from the hospital this past Saturday. Problem was, it wasn’t enough to jump and bail. I had to go over the bars, and it was pretty ugly: Two broken ribs, one non-displaced fracture in my collarbone, and I broke my scapula all the way across with three additional smaller fractures. I’m bummed, man.”

In addition to the nine-round Enduro series, Spies was planning to hit several stops on the Kenda Full Gas Sprint Enduro calendar – but those plans are now on hold while specialists determine the extent of Spies’ injuries. Spies is made of tough stuff though, and won’t be giving up on his budding off-road racing career that easy. “I’m definitely going to miss three or four rounds, but after the summer break I’ll be ready.”