Earlier this week, London Mayor Sadiq Khan invited a handful of manufacturers from the motorcycle and scooter industry to City Hall – attempting to tackle bike crime head on. 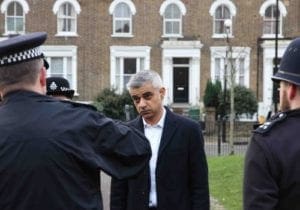 Khan spoke to Honda, Suzuki, Yamaha, BMW, and Piaggio about incorporating better anti-theft measures into its products, making them less vulnerable to theft.

Khan inferred that manufacturers should be working to implement inbuilt security measures, including trackers. He said: “It is essential that the manufacturers step up to help us tackle this problem at the source. Put simply, the design of motorcycles make them far too easy to steal, and this must be dealt with head-on at the point of design if we are to rid our streets of these crimes.”

Mopeds are typically a soft target for theft – because it’s comparatively easy to get their handlebars unlocked and ignition started when compared to a motorbike. The rampant theft rate has prompted rider protests asking for Greater London to install more ground anchor points for riders to chain their bikes.

A release on the official website of the Mayor of London, said: “Moped crime is reckless, frightening and intimidating and it will not be tolerated on the streets of London. The Mayor views this crime as an extremely serious offense and fully supports the police to crack down on perpetrators.”