Five-time World Champion Jorge Lorenzo put in the fastest ever lap of Sepang, during Day Three of the MotoGP Test. 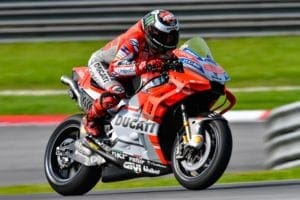 Jorge Lorenzo (Ducati Team) decimated the competition on the third and final day of the Sepang MotoGP Test, setting the fastest ever lap around the Malaysian venue; an impressive 1:58.830. His closest challenger was Repsol Honda Team’s Dani Pedrosa – the fastest man on Day One of the test – who was just over a tenth and a half behind his compatriot, while Cal Crutchlow (LCR Honda Castrol) took P3, only half a tenth behind Pedrosa’s RC213V.

During Day Three, Lorenzo put in 48 laps overall, topping the timesheets on Lap 21. However, the 1:58.830 lap will not count as the official record, having been set outside a race weekend – though it acknowleged as the quickest recorded lap on two wheels. The previous best belonged to Marc Marquez (Repsol Honda Team), set during testing in 2015.

And that’s a wrap on the first action of the year, but MotoGP will be back before you know it – as riders head to Buriram in Thailand (for the 16th February) ahead of the 2018 debut of the Thailand GP.