Winter is traditionally the time for tinkering, and Indian is encouraging riders to pick up their tools and flattrack their Scouts – taking inspiration from the Indian Super Hooligan that’s making a name for itself in the American Flat Track championship. 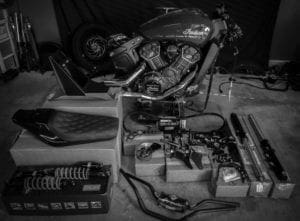 Indian says it is starting to see an increase in riders in Europe who want to create a bike they can ride every day in comfort, but that’s looks like it’s ready to tear up the dirt too.

Indian’s general manager in Europe, Grant Bester, said: “We’ve certainly seen interest grow in flat track styling since we unveiled the FTR1200 Custom at EICMA last year. The beauty of the Scout is that you don’t need to cut or weld parts to transform the look. You can buy many of the parts you need off the shelf and fit them yourself at home, in the garage, with little more than an impact wrench and a good set of sockets.”

And best of all, transforming your stock Scout Sixty, Scout or Scout Bobber is surprisingly easy – especially if you take advantage of the abundance of official Indian accessories, or even get your hands on one the numerous custom kits that bike builders and parts manufacturers are now flogging.  So, to turn your stock Scout in to a flat track racer, you’ll need – a base bike and a vision of what you want to create.

Indian’s head of Parts, Apparel and Accessories, Andreas Geisinger says that there’s no need to fret about stripping a brand new machine down. “To get the flat track look, you’re really only going to take off key components and replace them. So things like adding mid-position foot controls, a different seat unit and adding new wheels. Most people tend to go for 19 inch wheels and then fit 12 inch shocks. You’re looking at paying around €2,000 to €2,500 to do that.” 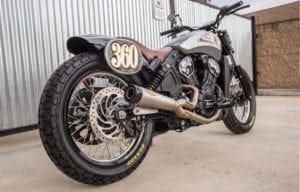 Skateboarder Steve Cabellero, has flattracked his Scout Bobber. Steve wanted a ‘Street Tracker’, something he could ride on the road day-in and day-out, but then also take to a Hooligan race and turn some laps if he wanted. Steve said: “Adding 19 inch wheels was the first thing we did with the bike, and that set the stage for everything else.”

Stunt rider Tony Carbajal has built a snarling Scout too, which he uses in his Indian Thrill show. In fact, he’s even made a series of videos on YouTube – which you can watch by clicking HERE.

Tony explains: “I have ridden and owned many two wheeled machines. None of which could properly rip across the pavement and shred in the dirt like the Scout I have built. I have a special love for this machine. A love that I can’t talk much about around the girlfriend or the other motorcycles in the garage. There is just something special about having plenty of power roaring out of that V-Twin Scout motor for getting sideways on the asphalt, hanging wheelies, jumping into the dirt and leaving your worries in a cloud of dust. My Indian Scout hooligan bike has all my friends envious! Always a bonus!”