Richard Hammond tumbles off a TVS during Grand Tour filming

Richard Hammond has got a pretty chequered history when it comes to crashing – so it’ll come as no surprise that he dropped his bike during filming for the Grand Tour charity adventure across Mozambique. 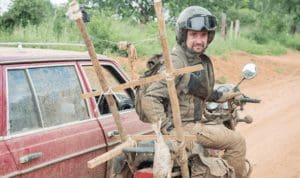 In the episode which is set to air on Amazon Prime on the 16th February, Hammond fell off his TVS Star HLX 125 “at least 30 times” – but this time, there were no trips to hospital. Hammond, Clarkson and May were transporting fish from Mozambique coast to the island’s centre where people are “on the brink of hunger”.

Hammond struggled with the muddy conditions while riding a TVS Star HLX 125 which he paid £800 for. Asked about the incident packed series, Hammond said: “I had a slight incident in Switzerland when I departed the road backwards in quite a fast car, but I also crashed a number of times on a motorcycle in Mozambique. Basically, what’s gone wrong is I keep getting injured.”