One of two surviving pre-production Honda CB750’s is set to go under the hammer next month at the National Motorcycle Museum – and auction house H&H Classics reckons a world record is in the offing. 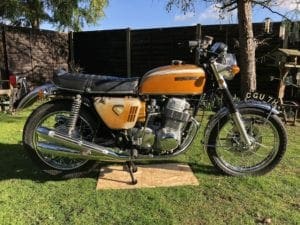 The pre-production CB750 is one of only four built – and only two are known to still exist. The other is over in the USA, and was famously sold in 2014 for $148,000. The CB750 up for auction could well beat that price and establish a new world record for this hugely influential bike – despite being listed for between £35,000-£40,000.

The CB750 up for auction was mostly hand made in Japan in c1968, before coming over to the UK in 1969, and being registered by Honda UK and used for the UK launch of the then new CB750 model. This gold bike was first shown in Europe at the Brighton Motorcycle show between April 5-12 1969, and it also appeared on the cover of the May issue of Motorcycle Mechanics in 1969. It has been in the same private collection for the past 35 years, and was undergoing a restoration when the owner sadly passed away. Its frame number is CB750-2110.

Head of Motorcycle Sales at H&H Classics, Mark Bryan, said: “This is one of the most historically important bikes we’ve had the pleasure to offer for sale. Referred to on its launch as the most sophisticated production bike ever. The standard bike at launch was capable of 120 mph and was equipped with non-fade front hydraulic brakes. The bike has gone onto become a true icon rated as one of the top landmarks of Japanese Automotive Technology.”

The iconic pre-production Honda CB750 will be going under the hammer at the H&H Classics auction on 4th March at the National Motorcycle Museum. For more information, click HERE.