Bike thieves in Bristol set fire to a stolen 1951 Triumph Thunderbird, after demanding £1,000 in ransom from its owner.

The group took to the ‘biketakerrr’ Instagram page, bragging about being in possession of the bike, and threatened to burn it, unless the owner paid them £1,000 for its safe return. After failing to pay, the thieves released a shocking video of them torching the historic Triumph (worth between £7,000 and £10,000) – and to add insult to injury, tagged the owner in the comments section, writing, “Told u give me a grand but you didn’t listen rude boy. Uno the drill, don’t pay gets burnt”. 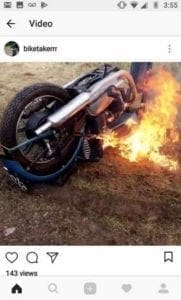 The ‘biketakerrr’ page is the latest to have been set up by the notorious Bristol bike gang/s, which first came to prominence in January last year. The gang, which is reportedly mostly comprised of youths from North Bristol, steals bikes while boasting about their exploits online. A number of members of the gang have been caught and prosecuted by the police in the last year – after officers set up a special investigation, named Operation Buell, to monitor the gang’s online presence.

Sadly, the police are yet to make any arrests relating to the incident – with a police spokesperson saying: “No arrests have been made but we are pursuing a number of different lines of enquiry.” This will include forensic examination of the bike, which was reportedly recovered from a field near Lawrence Weston. 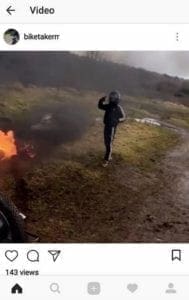 The incident has provoked a strong reaction from Bristol’s biking community, who are outraged by the gang’s exploits. Many of them have demanded to know what Avon and Somerset Police are doing to catch the gang, who continue to taunt the force on social media.

With justice not yet served, a small consolation for the owner of the torched Triumph Thunderbird is that the bike is reportedly not as badly damaged as first feared – and may still be rideable.