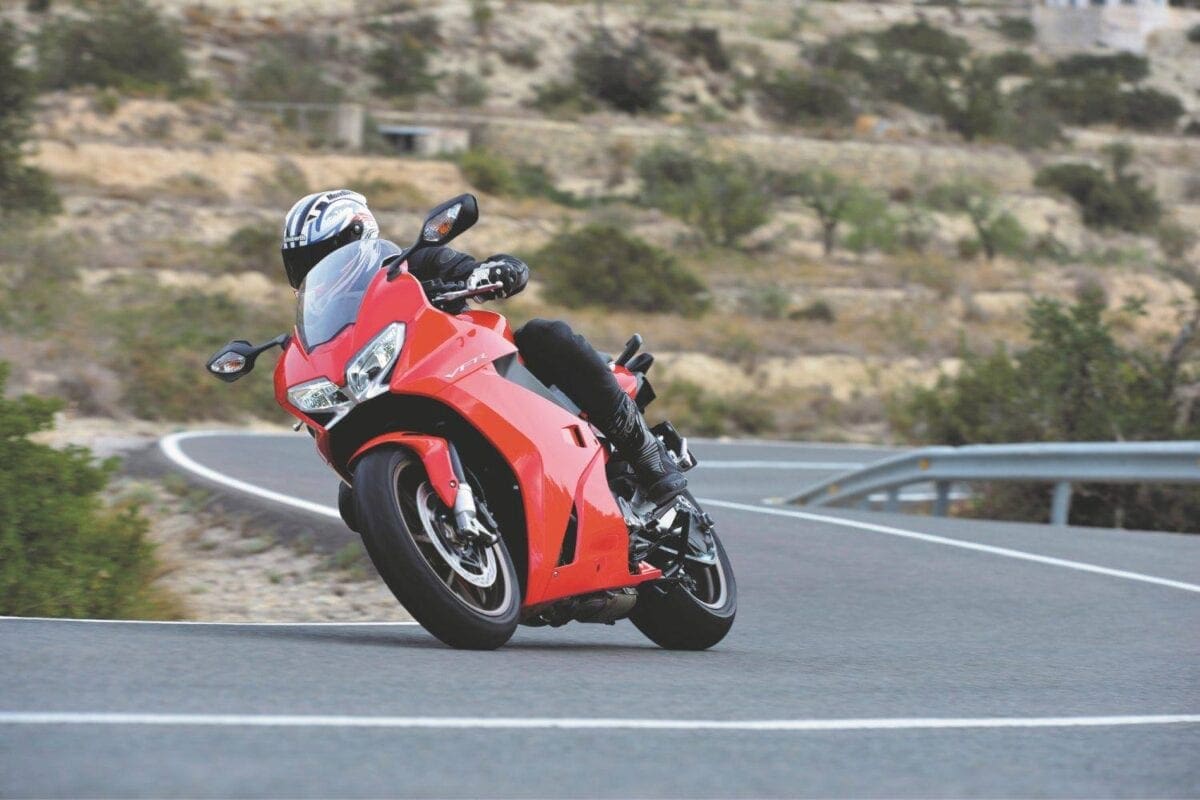 It’s estimated that more than 75,000 VFRs are actively ridden in Europe alone. Honda’s sixth generation of the popular sports-tourer is likely to see that figure rise again… For 2014, the VFR800’s been given a thorough working over, with a strong emphasis on improving the bike’s sporting credentials, whilst maintaining its commendable touring abilities. 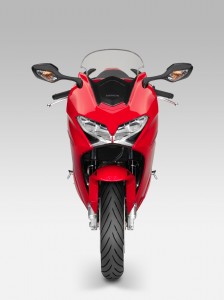 The project took around two years to complete and it’s essential to point out that aside from the engine and frame, pretty much every other component on the bike is new. The styling is the biggest giveaway of advancement, sporting an edgier and, importantly, narrower profile. The designers wanted to enhance the bike’s aerodynamics and to do so they opted to reduce the bike’s width. The side mounted radiators of old have been lost in favour of two vertically stacked rads, just forward of the front cylinders. This has made a huge difference to the bike’s image, which is also bolstered by a new headlamp, multi-spoke ‘Fine Die Cast’ aluminium rims, and a much more aggressivly styled Pro-arm swingarm.

But perhaps the biggest change to the aesthetics is the loss of the under-seat exhaust system. The latest VFR opts for a simple side-mounted can, which has saved a total of 5kg. Similarly, a replacement aluminium subframe has relieved an additional 2kg from the rear of the bike, enhancing the weight distribution in the process. Other significant changes include a new dash, new forks, the addition of traction control and a height adjustable rider’s seat – 789mm to 809mm.

Tell me about the engine…

The VFR’s motor is fundamentally unchanged. However, it’s been refined for an increase in low-to-mid-range performance, with a particular focus on reducing the V4’s VTEC snatchiness. The latter’s been improved via a combination of changes to the exhaust design and length, as well as through alterations to the fuel mapping and fuel volume. The difference 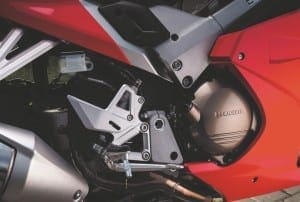 is staggering, and I can honestly say that the reduction in aggressive transition between the 2-valve / 4-valve performance is hugely notable. You can’t mistake the moment the addition of the hydraulic operated system kicks in, but more for audible reasons than physical disruption.

Below 7000rpm, the emitted engine noise is more whiney, with the air induction being more prominent than the exhaust note. As you crest the magic threshold, the VTEC becomes king, with an additional deep, mechanical noise joining the mix. It’s totally unmistakable to the ear, albeit you could be forgiven for not noticing it physically, because the process is now super smooth. Once in VTEC parameters, the bike’s acceleration remains linear, and hasty all the way up to the 12,500rpm limiter.

The models we tested were fitted with Honda’s optional quickshifter – a first for the company on a production bike – which allows you keep the throttle relentlessly pinned as you hook the next gear seamlessly. The system worked a treat, although I noted it to be a little sensitive to the touch, resulting twice in culls to the ignition without any physical gear change. But that’s more likely my fault for preloading the shifter. You’re on your own coming down the box, but the shifts remained smooth, at all times displayed on the dash’s gear indicator. 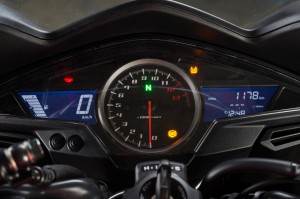 As you’d expect, the hydraulic clutch also achieved top marks and the same can be said for the initial grunt of the motor. To gain more torque, the valve timing and duration has been worked on, and the end result is strong power from as low as 2000rpm. The bike can pull most gears from low down, but it really comes alive after 3000rpm. At slow speeds, the motor’s well behaved and easy to manage in a town environment.

If you are a little ham-fisted on the throttle, the switchable traction control keeps any slide in check. The system retards the ignition and reduces the fuel frequency until the bike’s settled again: It’s a nice, smooth set-up that never detracts from the ride.

The VFR’s main frame remains completely unchanged from the previous model’s. The reason being that Honda’s engineers failed to be able to improve on the design. However, they looked closely at components supporting it, and made a number of key changes. The new swingarm is one of the most significant: Despite maintaining the same dimensions as the old one, the design is totally new, and said to offer better torsional stiffness. This is a big aid in the handling department, making the ride sportier, with less flex from the rear. 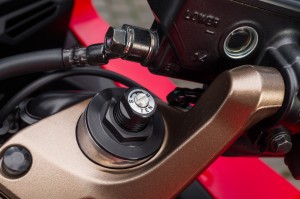 The bike’s suspension has also been altered, with totally new forks up front, sporting a two-piece design to incorporate powerful radial brake calipers. The internal progressive spring rate has been altered at the bottom of its stroke to provide more support, whilst the shimming on both the front and rear units has been changed to offer greater damping affects.

All of these changes combine to deliver a truly remarkable riding experience. The VFR’s a do-it-all type of bike, and it’s totally unfazed by any corner at any pace. Throw it into one at speed and it will hold a consistent line, ready and able to change direction rapidly when requested.

Our test ride’s photoshoot took place on a tiringly twisty route near Benidorm: A lot of the corners tightened beyond the norm on exit, which proved no real challenge for the VFR, as it doubled back on itself to oblige an apex. Its agility was worthily noted and so too was its commendable level of feedback. This is one of those bikes that comes alive with an injection of rider input, yet still proved perfectly well mannered when the pace slowed down in town. 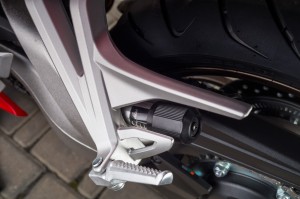 Should I buy one…

VFR’s have always been popular motorcycles, going right back to the first batch that hit the streets in 1986. The reason for this is that they’re so versatile. They’re a unique breed of motorcycle, and the latest version continues that theme. If you’re the kind of rider who wants a machine that’ll commute, tour, scratch and deliver 50mpg, then this one’s for you. The crazy thing is that it’ll genuinely tackle most riding challenges commendably, whilst looking superb and sounding exceptional.

The additions of Traction Control and five-stage heated grips, as standard, will no doubt make this already fantastic package even more desirable, especially when you consider it’s priced at £10,499. You’re getting a lot of bike for your money.

But it’s not just about the quantity of tech your getting; it’s the way in which it’s delivered. The finish on the VFR is fantastic. It will put most bikes’ build quality to shame, because so much attention to detail has been paid to the way it looks. The new styling is easy on the eye, but it’s when you get a bit closer that you realise the nice little touches which make this bike stand out. Take the VIN-plate, for example. It’s situated on the right side of the frame and it’s tacked on by two gold-headed pins. Continuing with that gold theme, the wheels are also 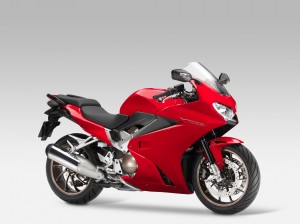 treated to such a finish, along with the cylinders’ rocker covers, crankcases and the top yoke. It gives the bike a regal feel, regardless of whether you opt for the black, red or white colour options.

One of the nicest features on the bike has to be the dash: Smack in the middle is a large analogue rev-counter, shouldered by an abundance of info on multiple digital displays. Cleverly, the display’s backing is black, with the info in gold. This means that it’s constantly clear and easy to read, regardless of how strong the sun is. A small, yet significant feature which reflects how well considered this bike is.

The Honda delivers a premium riding experience, though that was always to be expected. This is a flagship model for the Japanese brand and that’s reflected in every turn of the wheel. It’s hard to pick fault without getting too finicky, and pointing out small niggles such as the Traction Control button, which looks a little bit of an afterthought. 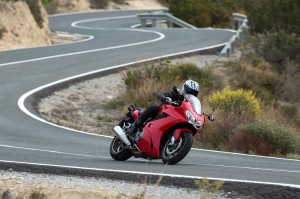 Overall, it’s highly commendable, providing a great range of power throughout the revs, strong handling abilities worthy of track or town demands, and a fantastic image. The tech’s reasonable enough, although I did find myself lusting after cruise control on a particular motorway stretch. But you can’t have it all.

It’s a workhorse for every environment and it’s a fun and comfortable bike to ride. My 5’ 9” frame slotted in nicely with the bike’s ergonomic package, which sports 13mm taller bars over the previous generation, along with an accommodatingly low seat and not too rearward faced pegs. The new bike has a fuel capacity of 21.5 litres, with a claimed range of over 215 miles between fill-ups. Tucked in behind the bike’s generous fairing and screen, I’m sure that’s a distance that wouldn’t require too much aching to master.

Will YOU be buying the new VFR? Do you have one of the previous models? Let us know below…