The first Honda CB750 was launched at the Tokyo Motor Show in October 1968 – and this year celebrates its 50th Anniversary. To celebrate, a special CB750 SOHC Celebration Day will be held at The David Silver Honda Collection museum in Leiston, Suffolk on Saturday 29th September 2018. 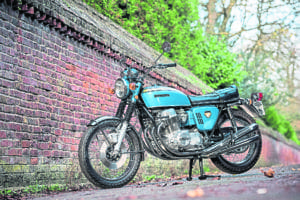 To commemorate the special occasion, David Silver’s aim is to attract as many SOHC CB750’s as possible to the one special day, to celebrate the birth of the CB750. Consequently, the event is open to all owners of any of the 1969 to 1978 SOHC CB750 models. More specifically:

Owners are welcome, and encouraged, to ride their CB750 to the event or if travelling from far, bring by transport – and then, during the day’s celebration, all arriving CB750’s will be judged by an expert team and eight awards will be presented in the following categories:

Entry forms are available now from David Silver Spares – sales@davidsilverspares.co.uk – with entries closing on August 31st. The David Silver Honda Collection museum will be open with free entry on the day and refreshments will be available.