In an unpredictable second race in the Motul Thai Round, Chaz Davies (Aruba.it Racing – Ducati) surged through the field to take a 28th career victory and a first around the Chang International Circuit, becoming a third different winner in the opening two weekends of the 2018 Motul FIM Superbike World Championship. Davies produced a stunning ride with an average gain of a position per lap over a seven-lap period, hitting the front by the end of lap eight and controlling the race from there. 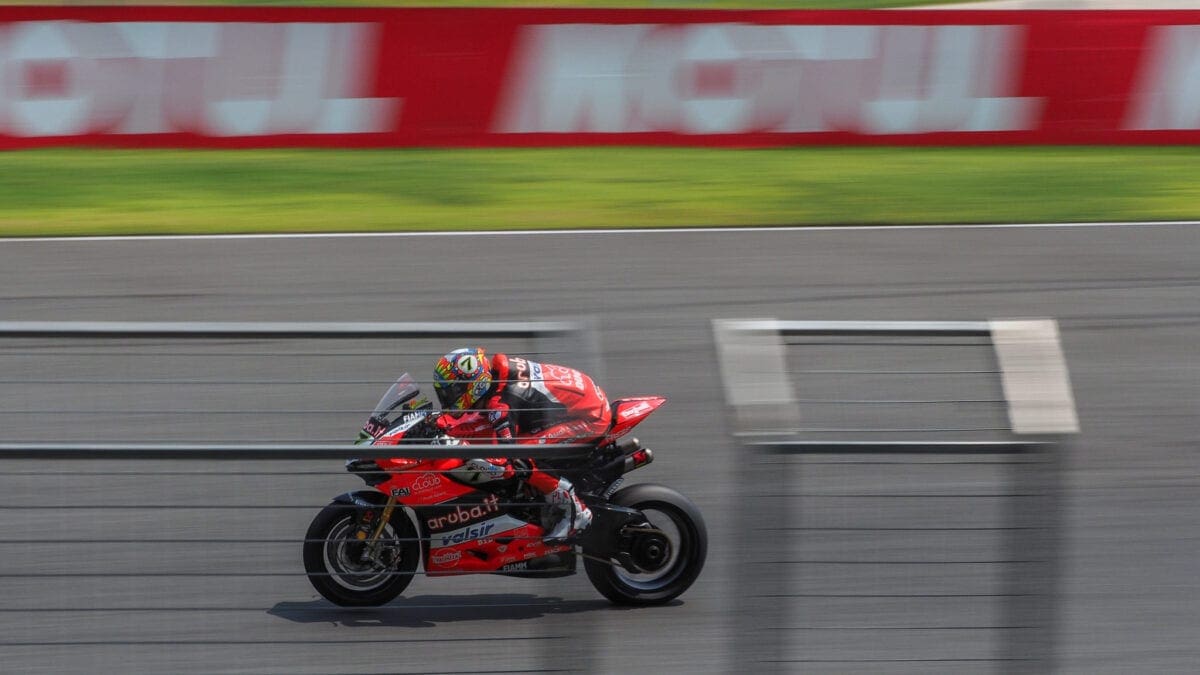 Taking advantage of the reverse grid format, it was the Pata Yamaha duo of Michael Van Der Mark and Alex Lowes who made the early break, but as they squabbled among themselves the remainder of the pack stayed in touch. Lowes was the second of three riders to lead a lap on the Chang International Circuit as he passed teammate Van Der Mark on lap two, but the Dutchman came back through and led for the next five laps. Eventually both overhauled by Davies the Yamaha pair nonetheless did enough to secure second and third positions, the first double podium for Yamaha since 2016. Lowes, in particular, was satisfied with an extra surge of pace in the seven closing laps that helped him to claim an eighth career podium. 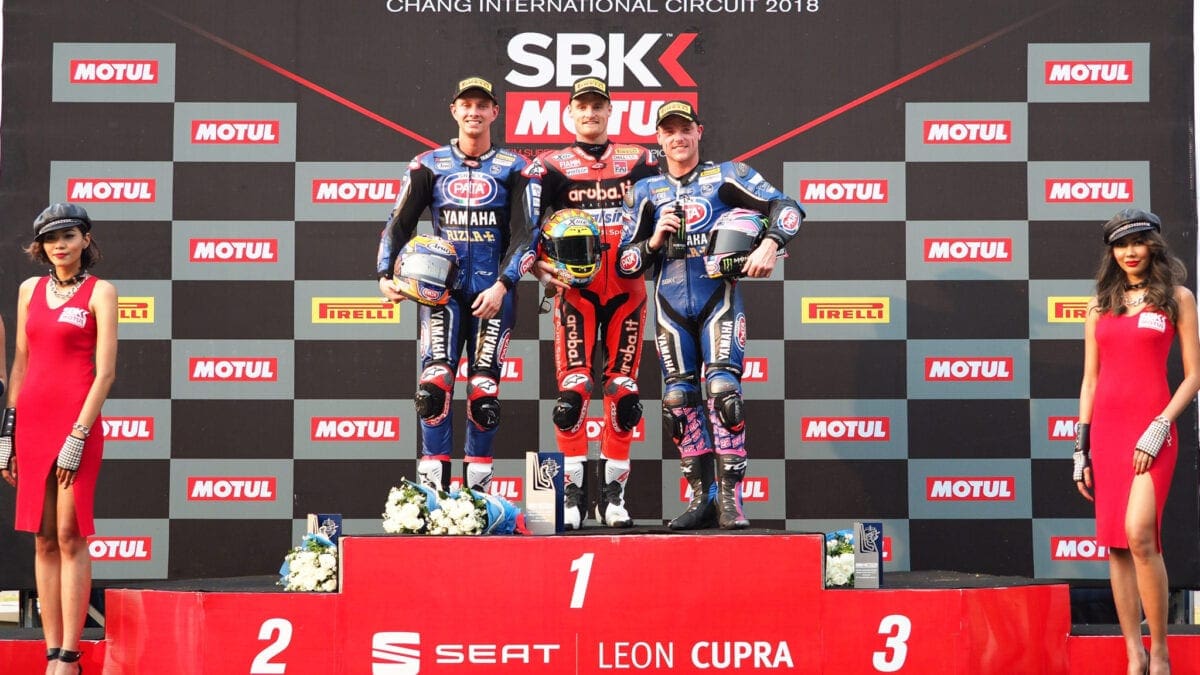 Kawasaki´s unbroken record of victories at the Motul Thai Round was finally ended on a day where neither of their top performers could make it on to the podium at all. Tom Sykes (Kawasaki Racing Team WorldSBK) failed to take advantage of his front row grid slot, dropping back to ninth by the end of the opening lap and eventually retiring from the race.
Jonathan Rea (Kawasaki Racing Team WorldSBK), meanwhile, finished just three seconds from the podium places after an action-packed ride. Following an excellent first lap that saw him surge through from ninth to fourth with a series of aggressive inside overtaking moves, Rea had put himself among the favourites for victory and threatened to make it back-to-back wins. But the Race One victor struggled in handlebar-to-handlebar combat, making a series of errors that ruled him out of contention for the win. 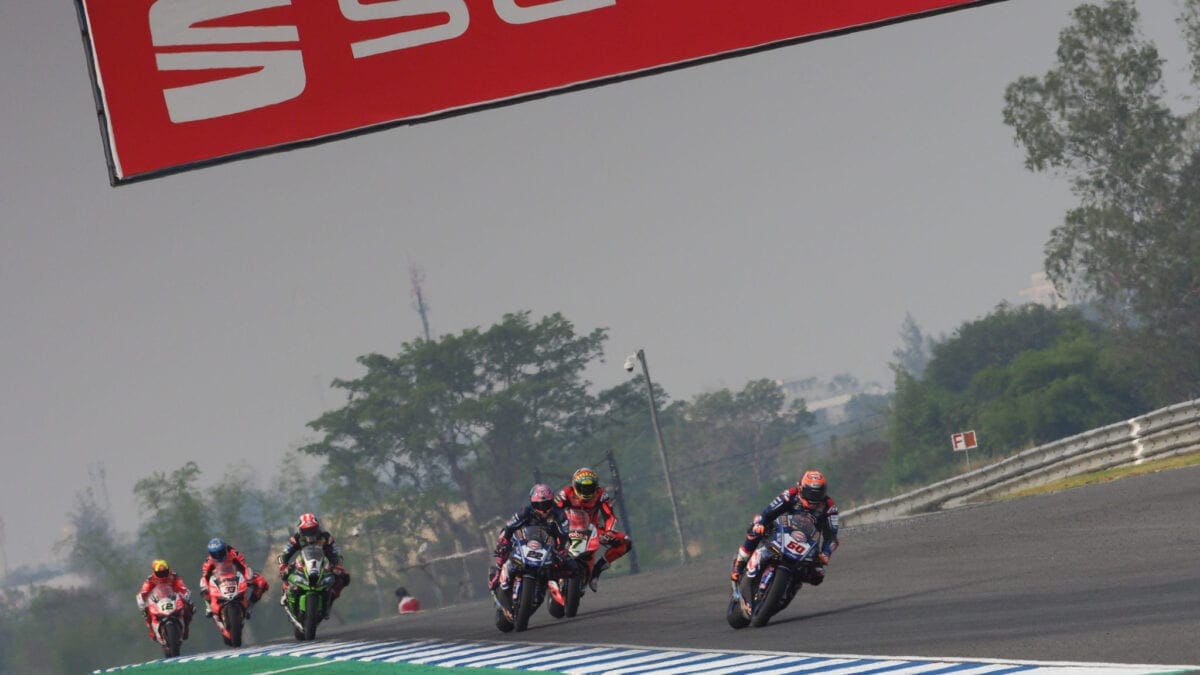 His first duel was with Marco Melandri (Aruba.it Racing – Ducati), a shadow of the rider that looked in command in Philip Island, and the pair swapped positions on no less than five occasions before Rea eventually came out on top.
By the time Rea passed Melandri on lap nine and then shook the Italian off, Xavi Forés (Barni Racing Team) had overhauled the pair of them to move clear in fourth. But Rea in clear air was a different proposition to the rider who had struggled under side-by-side pressure earlier on, and he hunted down the lead independent rider before an overtake on lap eighteen.
Upon reflection, despite not being the result he would have hoped for, Rea´s fightback to fourth could prove critical in the Championship Standings overall. Marco Melandri, series leader coming into Race Two, had another disastrous race in which he was relegated to seventh and never looked comfortable on the bike. And Xavi Fores, who had looked set to close on both Rea and Melandri in the Championship Standings and leave the three separated by just five points, conceded fourth place three laps from the finish to change the complexion of the series standings. With the riders of him in the race well adrift of him overall, Rea becomes the Championship leader and the man with the momentum as the highest scorer of the series´ top three for a second race in succession. 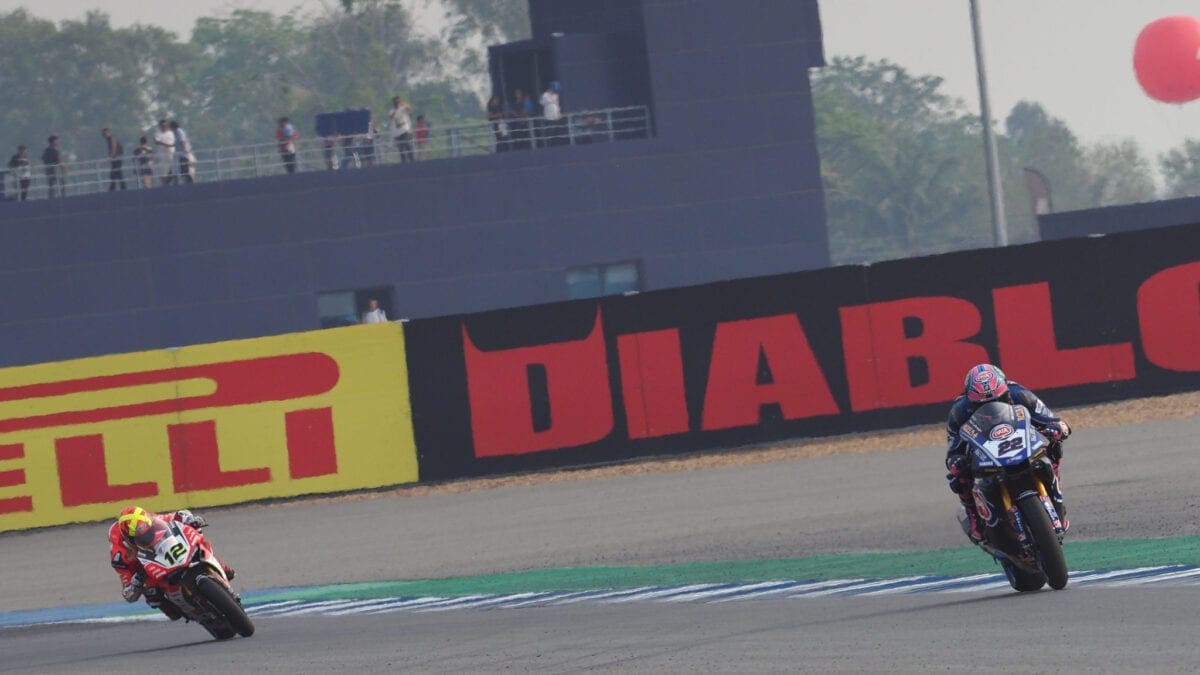 Meanwhile three of the top ten in the points coming into Race Two failed to finish. Tom Sykes retired with mechanical problems after seven completed laps, and therefore drops 26-points back from the leader and down to seventh overall. Retirement for Eugene Laverty (Milwaukee Aprilia) and Jordi Torres (MV Agusta Reparto Corse) was more spectacular, the pair coming together on lap five when dicing over eighth place: both riders will now arrive to Europe next month out of the top ten in the Championship leaderboard. Toprak Razgatlioglu (Kawasaki Puccetti Racing) was the rider to take advantage in Thailand, finishing best of the rest in eighth ahead of Lorenzo Savadori (Milwaukee Aprilia), who did well to nurse his injured shoulder into the top ten in the race. 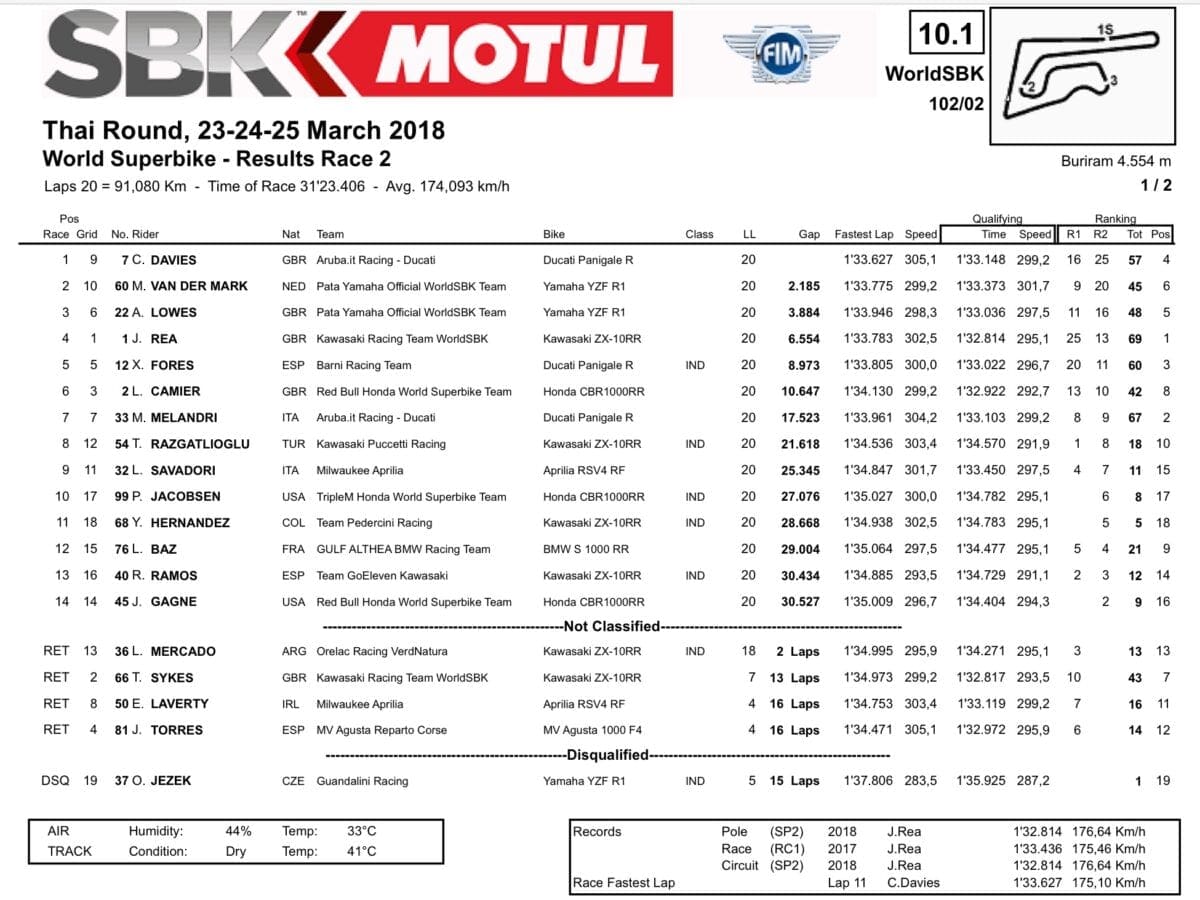