BSB: HASLAM HEADS THE PACK AHEAD OF SUNDAY’S OPENING RACE AT DONINGTON PARK

Home hero Leon Haslam topped the times in the second Bennetts British Superbike Championship free practice session at Donington Park as the JG Speedfit Kawasaki set the pace in the afternoon as conditions improved ahead of tomorrow’s rescheduled opening race of the season.

Christian Iddon had been leading for much of the early stages of the session for Tyco BMW, with Jake Dixon also having a spell at the top before the closing five minutes as Haslam pushed into the 1m:39s lap barrier, to be just 0.138s ahead of Iddon who also improved on his final run.

James Ellison had been another rider to post a time to head the session in the final 20 minutes, with the local Anvil Hire TAG Yamaha team holding third place at the chequered flag with Dixon dropping to fourth in the final moments.

Bradley Ray was the leading Buildbase Suzuki in fifth place ahead of Honda Racing’s Jason O’Halloran and OMG Racing Suzuki’s Gino Rea who had also been running inside the top five earlier in the session ahead of his Bennetts BSB race debut tomorrow.

Jakub Smrz was eighth fastest for PR Racing Lloyd & Jones Bowker BMW ahead of Richard Cooper who had a crash in the afternoon session and Tommy Bridewell completed the top ten. 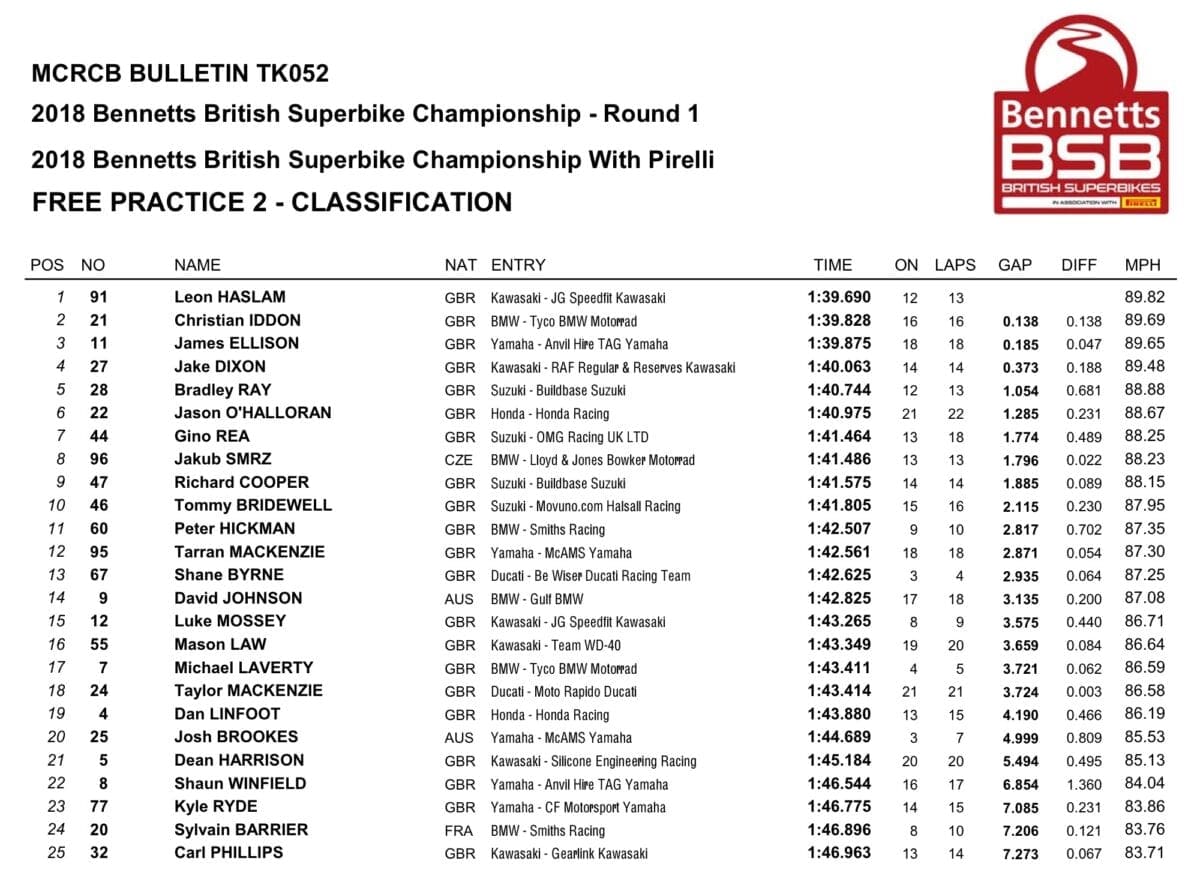 Defending champion Shane ‘Shakey’ Byrne had left it until the second half of the session to head out on circuit, posting the 13th fastest time whilst Josh Brookes and Danny Buchan had a crash together, when the McAMS Yamaha rider fell, taking the FS-3 Racing Kawasaki contender with him, both riders were ok but had a premature end to their day.

Glenn Irwin meanwhile had returned to the circuit after his crash this morning and has passed a medical to ride in tomorrow’s opening race.