Valentino Rossi has accused Marc Marquez of deliberately crashing into riders at the Argentina MotoGP, saying he is ‘scared’ to race with him – but we’ve found this compilation video from across the Italian’s career, showing Rossi giving as good as he gets.

He said: “Because Marquez does it purposely, it is not a mistake. So if you start to play like this, you raise the level to a very dangerous point. I’m scared on the track when I am with Marquez.”

When asked about Rossi’s comments, Marquez said he was: “Completely disappointed.”

The Spaniard said: “In my career I never, never, never go straight to a rider thinking that he will crash. Always I try to avoid. Today what happened with Valentino was a mistake, a consequence of the track conditions because I locked the front. But in my career, what he’s saying, I think is wrong.” 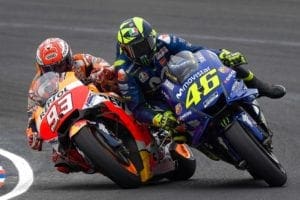 Rossi, who urged MotoGP bosses to take action against Marquez, added: “This is a very bad situation, because he destroyed our sport, because he doesn’t have any respect for his rivals, never.”

But a video doing the rounds on social media shows that although Rossi wasn’t apparently at fault this time, he’s been involved in similar incidents on more than one occasion over his racing career.

In fact, Italian racing legend Giacamo Agostini has even weighed in on the hot topic, in an interview with news station Radio 24 – and he reckons clashes like this simply a part of the highest level of motorcycle racing.