Guido Koch is a mechanical engineer and enthusiastic biker – and he’s managed to develop and produce an all-wheel drive motorcycle from the bones of a KTM 990, that he reckons is suitable for mass-production. 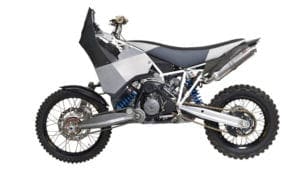 The benefits of an all-wheel drive vehicle are obvious; the added traction of a second driven wheel is hugely advantageous, especially in an off-road setting. But with none of the top motorcycle manufacturers putting any serious effort into successfully developing and offering an effective all-wheel drive for motorcycles – Koch decided to make a start himself.  He’s spent the last ten years in development, and has emerged on the other side with a bike he’s dubbed the DT-A, which was unveiled at the IMOT Show in Munich earlier this year. 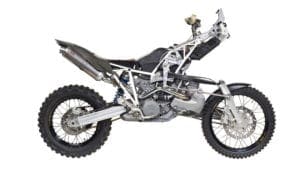 Koch chose a 100hp KTM 990 Adventure as his base bike – but all that’s left of the original machine, is its engine, rear wheel, swingarm and brake system. In order to offer drive at the front wheel, the KTM was stripped of its conventional telescopic front forks, in exchange for a single-arm swingarm, which leads the front wheel in a steering knuckle. Steering comes via a trailing arm and an auxiliary linkage, while the drive of the front wheel is via a chain that runs parallel to the rocker and is mounted on both swing axles. Clever stuff, right? 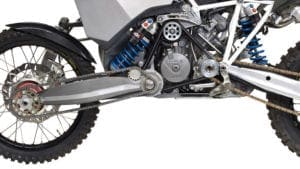 Delving deeper, power is distributed from the engine via a belt system, which picks up the drive using a freewheel – but, Koch has designed it so that power only flows to the front wheel when the rear wheel reports more than 5 percent slip. Or you can switch the power circuit off permanently using a switch on the handlebar. 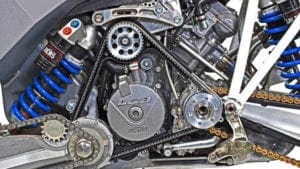 Koch has patented his all-wheel drive system, and although the DT-A is still a prototype, he has around 270 engineering drawings and casting tools ready to go, to enable large scale production. Now he just needs some investment…