WSB: Home heroes and history makers at Assen this weekend

This weekend, the MOTUL FIM Superbike World Championship heads to the iconic TT Circuit Assen for the fourth round of the season. 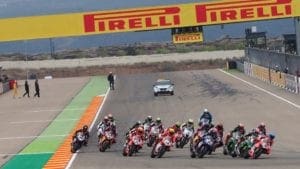 For the first time in history three riders have managed to pull off two wins each – meaning there’s just 18 points splitting the top three riders in the standings, so there will be plenty out with a point to prove in The Netherlands this weekend.

Three time world champion, Rea has taken seven consecutive wins at Assen – so he’s the man to beat this weekend around the 4.5km track. And after winning two of the opening six races so far, and sitting at the top of the Championship standings, Rea will be heading to Assen with confidence, looking to take his first double of the season.

Just behind him is Chaz Davies – who’s taken four podiums from 12 race starts around ‘The Cathedral’, Davies has taken four podiums, all of which came on a Ducati. He’s had a strong start to the season, and will be looking to keep the results coming this weekend.

But, the man all the crowd will want a piece of this weekend is Michael van der Mark – who’s heading back to his home circuit full of determination to take the victory. So far this season it has been all or nothing for the 25 year old Yamaha rider, with three third positions and two DNF’s so far – but coming off the back of a podium in Thailand, van der Mark will be hoping to put in a strong performance over the weekend.

The action kicks off on Friday, with WorldSBK FP1. And to keep track of the racing schedule, and the results as they come in, click HERE.