The KRT rider fends off attacks from Van der Mark and Davies to increase championship lead. 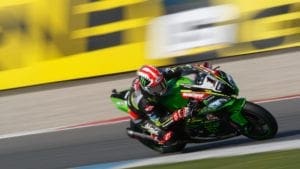 The grid hinted towards a fascinating start, with five teams holding the first five positions. Rea made the move over poleman Alex Lowes (Pata Yamaha Official WorldSBK Team) at the first corner, although it was Xavi Fores (Barni Racing Team) who took the early lead with a flying start at the lights. However, by the end of Sector 1 it was Rea back on top. Behind him, van der Mark began his climb right of the bat, jumping from seventh to fourth.

The crowd were ecstatic by the end of lap 8, as local boy van der Mark, astonishingly quick throughout the race, picked off Rea at the chicane and made his way into first. However, the championship leader took over two laps later, same spot, same move.

By then Chaz Davies had quietly made his way to the top, once again making up for a poor Superpole with a scintillating race. A three-way battle ensued, with Davies merely centimetres off of Rea but unable to just quite make it past. With van der Mark and Davies then battling for second behind, Rea put some space between him and his pursuers for the final laps, although never more than a second.

Behind the front three, Tom Sykes (Kawasaki Racing Team WorldSBK) showed the Kawasaki’s pace here after a poor weekend at MotorLand Aragon, coming in fourth and a mere two tenths off a first podium finish since Phillip Park Race 1.

Xavi Fores, again the first independent rider, made it through the checkered flag in fifth, drifting off the front pace through the final laps. Marco Melandri (Aruba.it Racing – Ducati) made it to the line in sixth, untroubled but also unable to stay close to the lead.