WSB: Sykes storms to victory in Race Two at Assen

Tom Sykes (Kawasaki Racing Team) put in the most dominant performance in the 2018 season of the MOTUL FIM Superbike World Championship so far, recording fastest lap after fastest lap to score his first win of the campaign, ending Jonathan Rea’s (Kawasaki Racing Team) Assen winning streak in the process. Behind them, Michael van der Mark (Pata Yamaha) recorded his second successive podium in front of his home crowd. 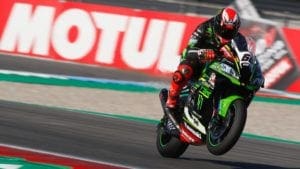 Since Sylvain Guintoli in Race 1 of 2014, nobody had managed to question Rea’s authority at the Cathedral. That streak, eight successive wins here including Race 1 yesterday, was finally ended by Rea’s teammate, the only other rider on the grid who had previously won here (2013, Race 1).

Yesterday Sykes stressed how fast his bike could be, with his issues only coming whenever he needed to overtake his rivals, particularly the Ducati’s. This wasn’t a problem here: Sykes started from pole, didn’t allow Xavi Fores (Barni Racing Team) to squeeze forward at the start, and then pushed hard until opening a 5-6 second gap with his closest pursuers, consistently riding two to three tenths of a second faster than Rea and van der Mark.

The pair held an exciting duel yesterday for the win, and from the start they were paired together again: eighth and ninth on the grid, third and fourth after Lap 1, and competing for second for the latter two thirds of the race. Eventually, Rea managed to open a gap with his Yamaha rival, completing the first KRT one-two since Laguna Seca/R2 2017. He now leads the championship by 30 points, and despite not beating Carl Fogarty’s historic 12 Assen wins, the reigning champion will be pleased to have opened a gap here in the Netherlands.

Van der Mark couldn’t fight for the win today, but pleased the home fans with a third place, his fifth Assen podium finish, and moves into fourth in the championship standings. The man he overtakes this weekend, Xavi Fores, came in just behind in fourth position, the first Ducati rider and, as in most races so far this season, the best independent rider.

Melandri suffered more, however, falling back and never really escaping from the middle pack of five riders that closed the top-10 positions. He finishes seventh, behind the MV Agusta of Jordi Torres (MV Agusta Reparto Corse) – best personal finish of the season – and only just ahead of Loris Baz (GULF Althea BMW World Superbike Team) in eighth, his second successive top-ten finish. That group was closed by Toprak Razgatlioglu (Kawasaki Puccetti Racing) in ninth, followed by Lorenzo Savadori (Milwaukee Aprilia) in tenth.

WorldSBK action returns from May 11-13 from Imola.