It’s closer than ever as the flag falls at the end of the Americas GP, with Marc Marquez (Repsol Honda Team) taking the win and Andrea Dovizioso (Ducati Team) taking the Championship lead as Texas shook up the standings. There are now five riders within eight points at the top of the title fight – with Marquez a point off the top after his win, and Maverick Viñales (Movistar Yamaha MotoGP) moving up to third after a second place finish at COTA. 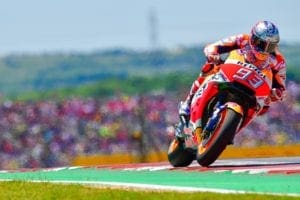 The Americas GP also made it back-to-back podium finishes for Suzuki, with Andrea Iannone (Team Suzuki Ecstar) putting in an impressive push from the front row to take third and his first rostrum finish of the season – and first rostrum with the Hamamatsu factory.

It was also Iannone who got the holeshot from second on the grid, but Marquez also got a stunner from Row 2 – slotting into second and on the chase behind the ‘Maniac’. Making his move soon after and taking the lead, the number 93 started to pull a gap – but Iannone wasn’t done, and gave it everything for a late dive up the inside of the reigning Champion. Running a bit wide on the exit, Marquez took him back – then putting his head down.

From there on out, the spectacular ballet of man and machine once more ruled the rodeo in Texas – with the victory making it ten consecutive premier class wins for Marquez on US soil.

Behind, however, it was getting pretty tight. Valentino Rossi (Movistar Yamaha MotoGP) was pressuring teammate Viñales for third as Iannone held firm in second. But lap-by-lap, Viñales was able to ease away and stake his claim on P2 – closing in on Iannone before a well-judged pass into Turn 1 saw the Spaniard able to get through and then pull away. Keeping it calm, he took his first podium of the season in second, and Iannone did the same in third.

Rossi came home fourth, with Dovizioso taking fifth after a particularly difficult weekend. Well-rewarded for a solid race, the 2017 Runner Up is now the leader of the pack once again after his controlled performance, including a late race pass on Johann Zarco (Monster Yamaha Tech 3).

Zarco was top Independent Team rider in P6, with former Championship leader Cal Crutchlow (LCR Honda Castrol) sliding out at the final corner when attacking the Frenchman earlier in the race. Alex RIns (Team Suzuki Ecstar) also then suffered a tumble soon after – riders ok and Crutchlow able to rejoin.

Meanwhile, Dani Pedrosa (Repsol Honda Team) followed up two stunning showings on Friday and Saturday to come home in a superhuman P7. Back on track and racing just over a week after surgery on his broken wrist sustained in the Argentina GP, the ‘Little Samurai’ rode a heroic push through the pain barrier around the punishing, technical challenge of the Circuit of the Americas in a performance worthy of the history books, taking home nine points ahead of the Championship’s return to one of his best venues: Jerez.

So there we have it. The rodeo is ridden and the points are given, and what a Championship we have on our hands as we head for Jerez: five riders within eight points, with ‘DesmoDovi’ the man in the lead on the road to Europe. Marquez trails him by one point, Viñales by five and Crutchlow by eight – with Zarco equal on points with the Brit, back in P5 due to Crutchlow having a race win.

Now, it’s carnival time. Packed grandstands, Spanish sun, the awesome Circuito de Jerez and one of the best atmospheres of the year – with the Championship so close, there’s almost nothing in it.