Moto Guzzi unveiled its Concept V85 at last year’s EICMA show to widespread admiration – and it’s been revealed that it’ll be heading into production sooner than we first thought. You’ll be able to buy this gorgeous thing in January 2019! 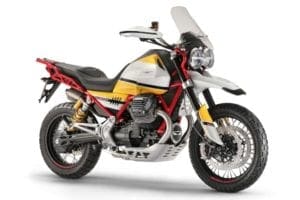 Valentina Barletta, marketing director of Moto Guzzi in France has confirmed that the Paris-Dakar inspired V85 will be availble in January 2019, after its official unveiling at the EICMA trade show later this year.

So what do we know about the neo-retro adventure machine from the iconic Italian brand? Well, it looks like it’ll be powered by a brand new 900cc V-Twin, cooled by air and oil, and designed to kick out least 80bhp – so it’s probably not going to set the world alight with its speed and power. 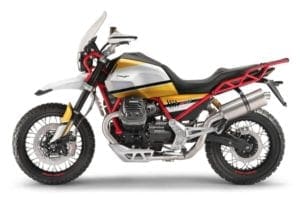 Aligning itself with the rest of the Guzzi range, the V85 is in essence a fairly basic motorcycle – as the Italian brand isn’t interested in competing with the latest and greatest adventure machines, which are packed full of electronics with more power on tap than most people ever need.