It’s no secret that Prince William loves motorcycles – and the latest machine to catch his attention is the all-new Royal Enfield Interceptor INT 650. 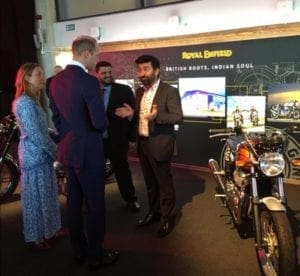 The Ducati-riding Duke of Cambridge has been busy on the biking front over the last couple of months. He’s been caught out on his Ducati a handful of times, visited Triumph’s new visitor centre and took a new Tiger for a test ride – and now he’s been checking out the all-new RE 650 Interceptor.

Royal Enfield’s official Twitter has tweeted a couple of images of Prince William discussing the new Interceptor INT 650 with Royal Enfield CEO Siddhartha Lal at the 2018 Heads of Commonwealth Meeting.

Featuring the #RoyalEnfield #Interceptor650twin @KensingtonRoyal & @sidlal taking a moment to share their common love for motorcycles and talking about Royal Enfield’s British Roots and Indian Soul at the Heads of Commonwealth Meeting 2018. pic.twitter.com/B79Uc8uNvN

The new Royal Enfield Interceptor 650 was unveiled alongside the new Continental GT 650, at the EICMA Motorcycle Show in Milan at the end of 2017 – and since then, we’ve managed to find out a bit more about the all new engine that’ll power both bikes. The air/oil-cooled 650cc parallel twin motor is capable of producing a power output of 47bhp at 7100 rpm and 52 Nm of torque at 4000 rpm – which means it’ll be perfect for A2 licence holders. The engine is paired to a six speed transmission, and the gearbox is augmented by its ‘slip/assist’ clutch. Stopping power is provided by a 320mm disc at the front and 240mm disc at the rear – and ABS will also be available as a standard.