We’ve been shouting about the TVS Apache RR 310 for the last couple of years – and it’s finally made it into production for the Indian market. Taking inspiration from the bikes German roots, one owner has decided to give his prized possession a makeover – with some spot on BMW paintwork. Looks brilliant, doesn’t it? 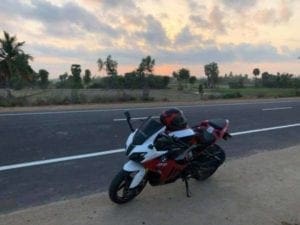 The motorcycle has been treated to a dual tone paint job, a BMW and RR310 moniker on the fairing and HP4 stickers on the frame. Of course, the upgrade is limited to visuals and the Apache RR310 doesn’t come with the asymmetrical headlight or the asymmetrical recesses for heat management on the fairing – and instead uses stickers to mimic the design of the BMW. Clever.

Admittedly, It’s still powered by the factory installed, 312cc, liquid cooled, single cylinder engine that was used in BMW’s G310R – which is capable of producing a maximum power output of 34bhp and kicking out 28 Nm of torque. 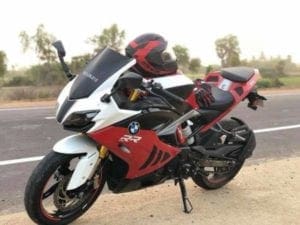 There’s still been no official confirmation from BMW about the S310RR – but we reckon it’ll be unveiled in either concept, or production form, during the show season later this year. We can’t wait.