VIDEO: Rider catapulted into air during American Flat Track race. This will make you wince.

During last weekend’s half-mile American Flat Track meeting in Texas, chaos ensued after a rider lost the front end of his Indian FTR750 – causing a pile-up in the middle of a corner, which resulted in Stevie Bonsey being catapulted high into the air. Made us wince. Don’t worry though; thankfully no-one was seriously hurt.

Ride along with Harley-Davidson's Brandon Robinson and watch as Indian Motorcycle factory pilot Bryan Smith Racing loses the front end of his #Scout #FTR750 and sets in motion what’s arguably the gnarliest crash of the 2018 AFT season – and maybe the wildest crash in AFT history. Luckily, all the riders walked away, including the high-flying Stevie Bonsey Racing, who got the worst of it with a broken ankle. NBC Sports coverage of the Texas Half-Mile from Texas Motor Speedway on premieres this Sunday, May 6 at 4pm ET (1pm PT). Don’t miss it!📷: Greg Newgard

So, the camera follows second-place Bryan Smith atop his Indian FTR750 – and captures him losing the front end after tipping into the corner. The issue comes as Smith’s bike sticks to the race line, instead of veering off the outside of the track. As a result, Jake Johnson, who was close behind Smith, could do nothing to avoid hitting the Indian. But it was Stevie Bonsey who had the worst of it, colliding with the FTR, causing a catapult effect that threw him high into the air. 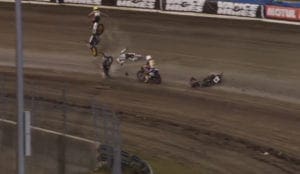 As we said, luckily none of the riders were seriously hurt. Bonsey came away with the worst injury though – a fractured ankle.