Shane ‘Shakey’ Byrne celebrated his first pole position of the 2018 Bennetts British Superbike Championship season at Oulton Park this afternoon, setting a blistering pace to set the fastest lap of the weekend to hold off Jake Dixon and Glenn Irwin.

Byrne topped an incredibly close Datatag Qualifying session; in Q2 the top 14 riders were covered by less than a second but the top nine shootout for pole was won by the defending champion who had a 0.130s advantage over Dixon.

Dixon and the RAF Regular & Reserves Kawasaki team had been making strides forward in the dry conditions and he banged in a lap time that Irwin couldn’t match, despite his best efforts as the Be Wiser Ducati team scored a brace of front row starts for tomorrow’s opening race.

Leon Haslam had been pushing to move up the order but when the chequered flag fell the JG Speedfit Kawasaki rider had to settle for a second row start alongside Jason O’Halloran, who had been setting the initial benchmark earlier in the session.

Luke Mossey had an improving performance as he climbed the order to sixth, holding off Movuno.com Halsall Racing Suzuki’s Tommy Bridewell to complete the second row.

Peter Hickman overcame a crash at Old Hall in Q2 and he was forced to watch the session from the sidelines, but he had done enough to hold a position in Q3. He returned to the garage at the end of the session and the Smiths Racing BMW team worked hard to get him back out on circuit.

Hickman was able to set the eighth fastest time ahead of Bradley Ray who made his first mistake of the season when he tipped off. He picked up the Buildbase Suzuki and rejoined, but was subsequently black flagged and didn’t get the opportunity to set a flying lap so he starts ninth on the grid for race one.

James Ellison had narrowly missed out in tenth place ahead of Danny Buchan and Josh Brookes. Ryuichi Kiyonari had just made the cut for Q2 on his final lap, but the Honda Racing rider tipped off unhurt which put him 18th ahead of tomorrow’s race. 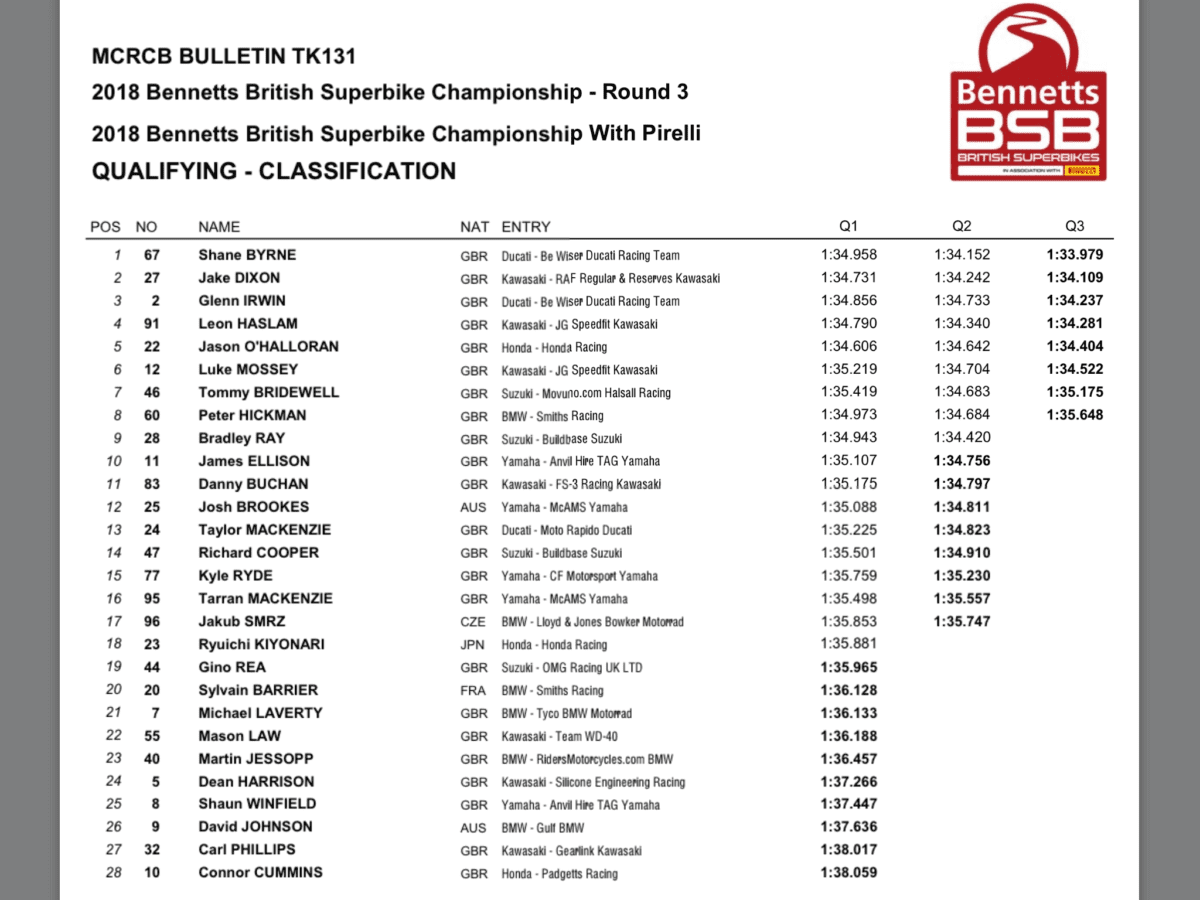