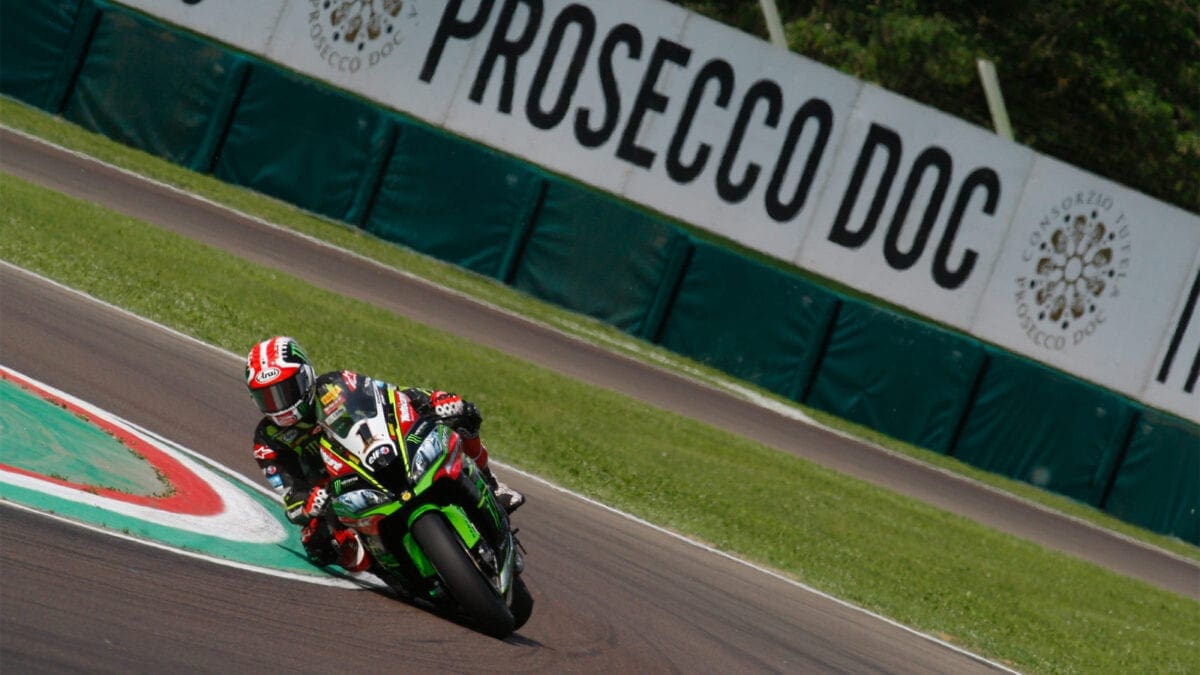 Jonathan Rea (Kawasaki Racing Team WorldSBK) took his first win at Imola since 2015 with a dominant performance at the Autodromo Internazionale Enzo e Dino Ferrari di Imola, controlling the race from the start and not giving anyone on the track any opportunities. His teammate Tom Sykes (Kawasaki Racing Team WorldSBK) completed the second consecutive KRT one-two of the season, with Marco Melandri (Aruba.it Racing – Ducati) returning to the podium in third. 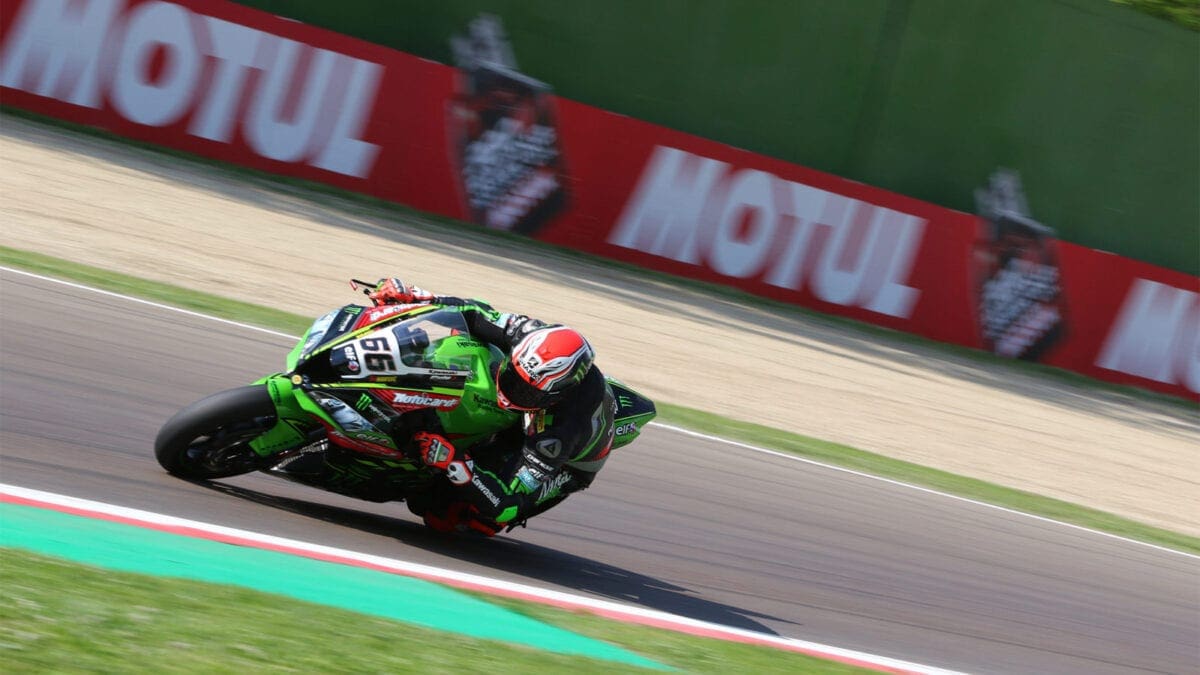 The Kawasaki riders shot out from the lights, quickly opening up distance with the riders behind. That gap would increase to 3-4 seconds between the British pair at the halfway point, with both riders leading the race from that point forwards. Rea is now just one win away from the all-time win record in MOTUL FIM Superbike World Championship history, and opens up a 42-point lead at the top of the standings.
Sykes too gave no option to the rest of the field, showing that his Assen pace was no fluke and that, when he’s got room in front, his ZX-10RR’s pace is almost unparalleled. It will be interesting to see how the rider from Yorkshire fares starting from 8th in Race 2, given the issues that have plagued him in the past. He now moves up to fourth in the championship.
The first two laps were a nightmare for Chaz Davies (Aruba.it Racing – Ducati), looking for his fifth consecutive win here. Following his crash in the Superpole 2, the Welshman struggled at the lights, falling back from third to seventh. After climbing back to fourth, Davies went straight through the Variante Bassa chicane, losing several positions along the way and any chance of a victory. He later redeemed himself with two wonderful passes at that same turn 21, but by then the podium was out of sight, thanks to the fantastic rhythm shown by Marco Melandri (Aruba.it Racing – Ducati) in front of his home fans. The Italian equaled his best WorldSBK result here in third, while Davies’ fourth will at least have the consolation prize of starting from P1 tomorrow. 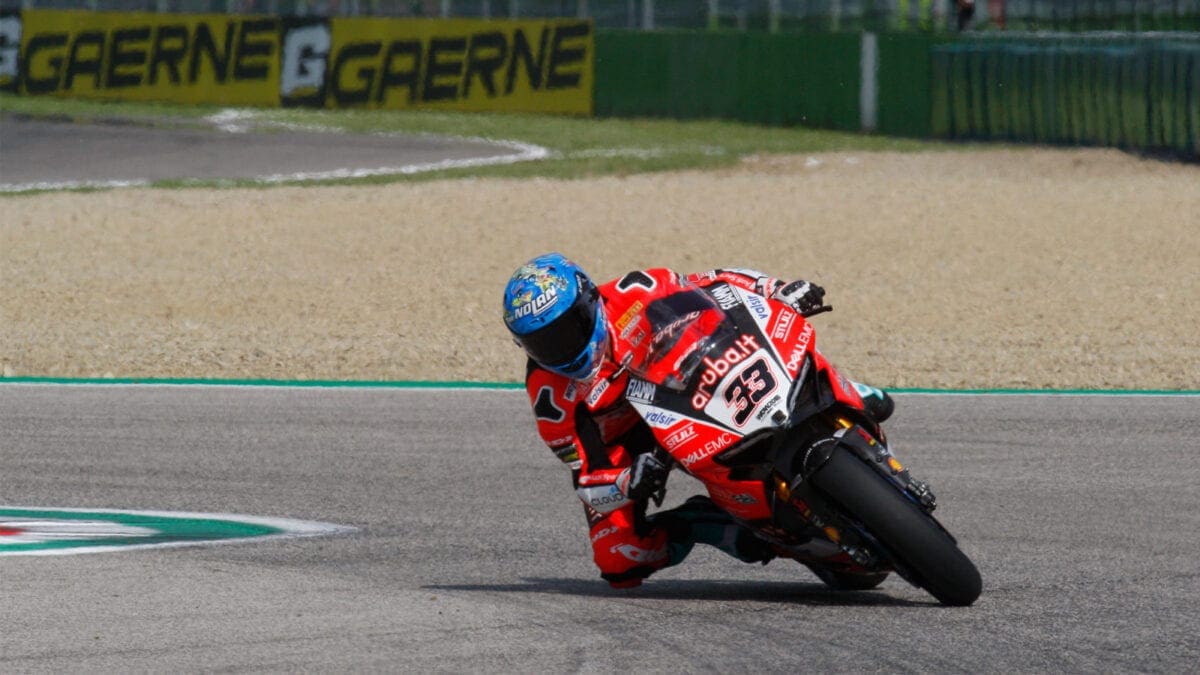 Behind the two teams that have dominated proceedings throughout the weekend, Xavi Fores (Barni Racing Team) repeated his 2017 Race 1 finish with fifth place, finding the pace to hold off Michael van der Mark (Pata Yamaha Official WorldSBK Team) in sixth. The Dutchman will however be pleased at his performance, after starting from the back of row 4.
Michael Ruben Rinaldi (Aruba.it Racing – Junior Team) had an extraordinary start to Race 1, moving up to third in lap one. He fell back as the race progressed, but his seventh-place finish equals his best result in WorldSBK. Just behind, Lorenzo Savadori (Milwaukee Aprilia) completed his best finish of the season in eighth.
Leon Haslam (Kawasaki Puccetti Racing) finished a successful return to the WorldSBK paddock in ninth, pipping ahead at the line of fellow Brit Alex Lowes (Pata Yamaha Official WorldSBK Team). Haslam beat his teammate for this weekend in Toprak Razgatlioglu (Kawasaki Puccetti Racing), whose WorldSBK Imola debut finished with him in eleventh.