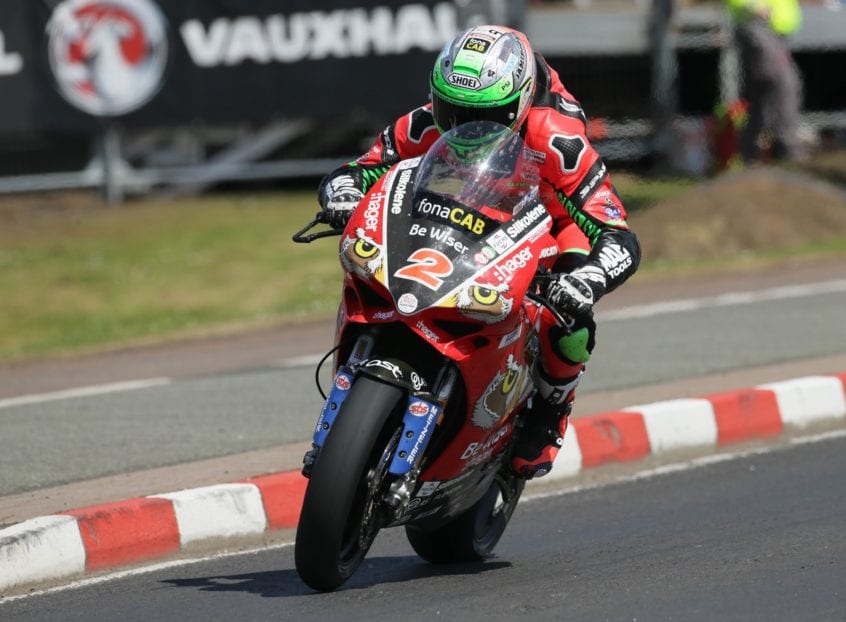 The PBM/Be Wiser Ducati rider, who is only competing in the superbike class, topped the time sheets during a dramatic final qualifying session on Thursday afternoon with less than one second separating the five fastest riders!

“I am really, really happy to take pole.” Irwin smiled.

“I’ve only done about six laps in the dry around here this week and the rest of the boys have done 40 or 50. In that last session I thought we had more time and I pulled into get a new tyre but then I decided to go out again without changing it!”

The final superbike qualifying session had to be red flagged after Lee Johnston’s Honda Racing Fireblade blew an engine at Carnelridge and dropped oil on the road. With the track cleaned there were just 20 minutes left before the roads had to be reopened, turning the final session into a hectic sprint for the frontrunners.

Irwin set his pole time on his final circuit.

“We had made a slight change to the bike and it wasn’t as stable as before which was a bit scary when it started weaving in straight lines.” last year’s feature superbike race winner explained.

“I made a mess of the last corner because of the old tyre and that affected my time but it will be close on Saturday.”

Silicone Kawasaki’s Dean Harrison finished just 0.066 seconds behind the Carrickfergus rider after getting a tow from Alastair Seeley on his final lap.

“I had a bit of clear track on that last lap and rode round with somebody who was fast.” the Bradford rider said.

“It will be close come the races and will probably come down to whoever is in the right place at the right time in the slipstreaming.”

“I thought I could have a bit of a go with Glenn but the big Duke has so much punch out of the corners.” the nine times North West superbike race winner said.

Martin Jessopp completed the front two rows of the starting grid for Saturday’s big bike races more than a second back on the Riders Motorcycles BMW.

Johnston’s Honda teammate, Ian Hutchinson, was 13th fastest as he makes his return from injury.

With sunshine and dry roads predicted for the rest of the week, the thrilling qualifying session has now set the scene for two explosive big bike races around the 8.9 mile Triangle circuit on Saturday.