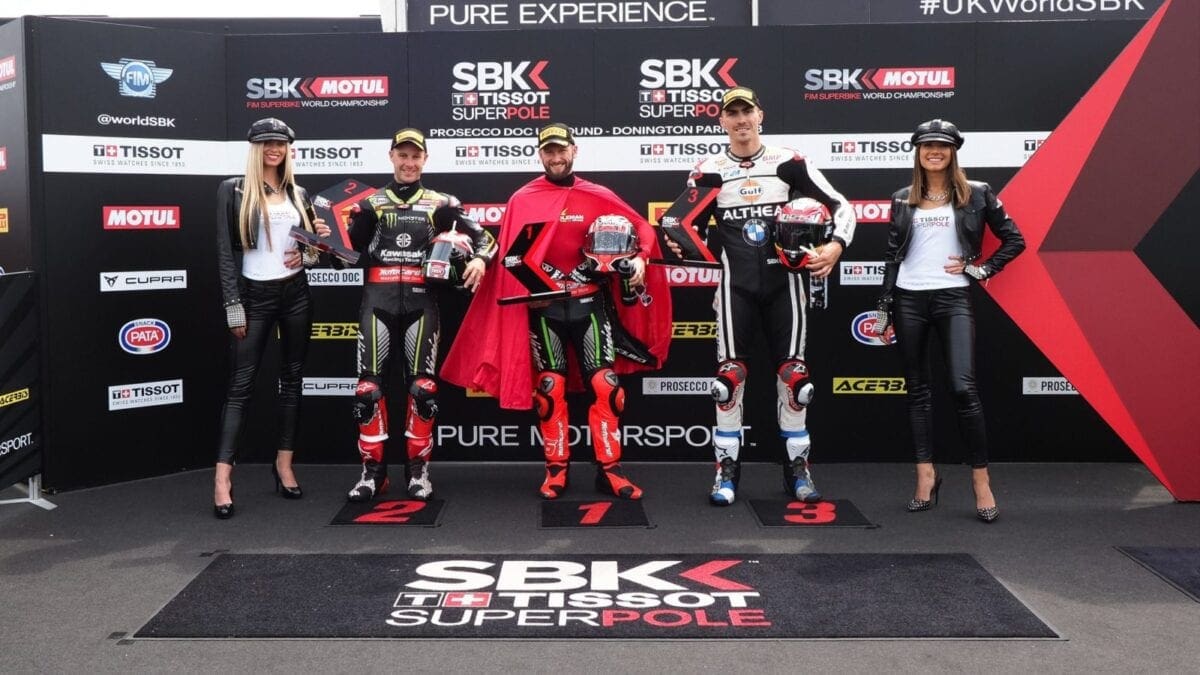 Superpole 2 leaves KRT 1-2 at top, with Baz jumping to front row
It was bound to happen this year, and where better than at home? Tom Sykes (Kawasaki Racing Team WorldSBK) has taken the Tissot Superpole at Donington Park with a blistering final run, and with that becomes the best poleman in MOTUL FIM Superbike World Championship history, finally beating Troy Corser’s legendary pole record with the 44th of his career.
The KRT domination from the Free Practice sessions extended to the Superpole 2, with Sykes and his teammate Jonathan Rea (Kawasaki Racing Team WorldSBK) topping the timesheets. Rea moved to the top with a minute to spare, but with Sykes consistently in red sectors behind him, there was no beating the Yorkshire rider. With Rea in second, a fascinating Kawasaki battle awaits in Race 1.
Making his first front row start of the season and showing yet again his pace at Donington, Loris Baz (GULF Althea BMW Racing Team) did the best third time of the Superpole 2, beating Lorenzo Savadori (Milwaukee Aprilia) by just seven thousandths of a second. Starting alongside the Italian, Yamaha pair Alex Lowes (Pata Yamaha Official WorldSBK Team) and Michael van der Mark (Pata Yamaha Official WorldSBK Team) make their way onto the second row in fifth and sixth, respectively.
Third row sees Eugene Laverty (Milwaukee Aprilia) back in the mix in seventh, foreshadowing an intriguing battle between the Yamahas and Aprilias to see who can match the KRTs. Toprak Razgatlioglu (Kawasaki Puccetti Racing) jumps all the way from the Superpole 1, which he topped comfortably, and makes it in in eighth ahead of the other Superpole 1 qualifier, Chaz Davies (Aruba.it Racing – Ducati). The Welshman scraped through the first session at the last second, and will have to mount another comeback from ninth.
Row four will see rookie wildcard Bradley Ray (Buildbase Suzuki) starting from tenth, Leon Haslam (Kawasaki Puccetti Racing) in eleventh, and a disappointed Marco Melandri (Aruba.it Racing – Ducati) in twelfth.
The big shock out of the Superpole 1 session was leading independent rider Xavi Fores (Barni Racing Team), who struggled around Donington and will start today’s race all the way back in 22nd.