VIDEO: British Talent Cup riders continue on the Road to MotoGP at Donington 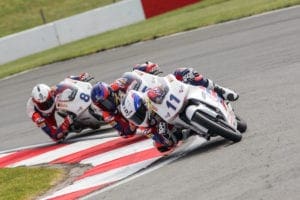 Part of Dorna’s Road to MotoGP program, the all-new British Talent Cup is designed as the perfect stepping-stone for riders from the UK and Ireland to get onto the world stage – and this weekend, the racing was at Donington Park – in support of the World Superbikes. 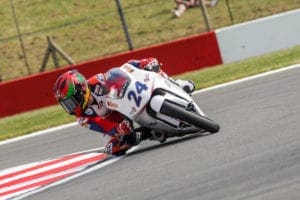 In race one, 16-year-old, Rory Skinner kept cool under pressure to cross the line in first place, a tenth and a half clear of Max Cook – who bounced back from a crash in the first race of the season in March to bank his first podium in second place. And Thomas Strudwick – the first winner of the year – completed the podium in third.

In race two, it was Max Cook who took the top step of the podium after another nail biting race. Rory Skinner held onto second place and Thomas Strudwick took another solid third place finish – maintaining his lead on the championship.

Here are some videos of the action across the weekend…

SHARK Helmets has really got behind the British Talent Cup – and is the official sponsor for the race series. What that means is that each of the 23 riders are wearing a SHARK Race-R Pro helmet, as well as receiving one-to-one race support at meetings from the SHARK UK Race and Technical Department. For more information on Shark Helmets, click HERE.