IOM TT 2018: Peter Hickman takes his first TT win with Superstock race setting NEW LAP and RACE records. One of the BEST races of ALL TIME 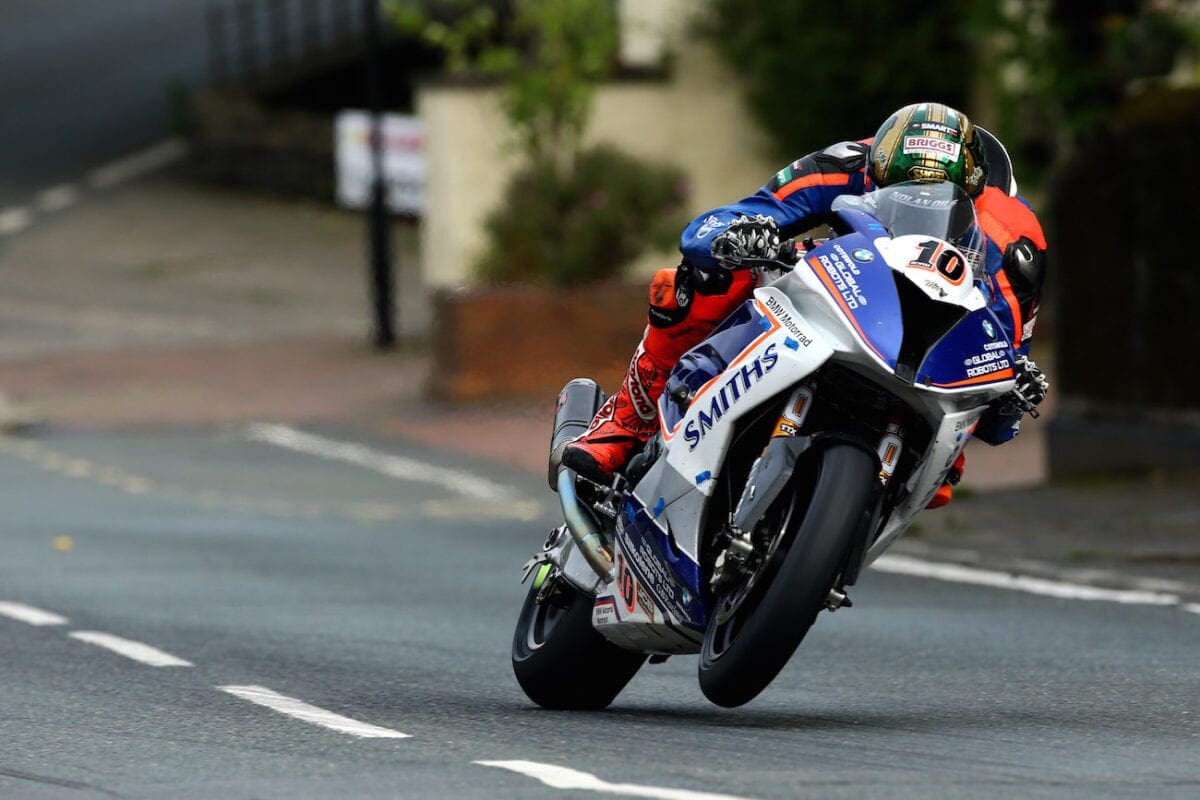 Peter Hickman, Michael Dunlop and Dean Harrison have just finished one of the most incredible flying lap shoot-outs in TT history with all three lapping the Island at near lap record place in an incredible Superstock race finale.

Hickman led Dunlop who in turn led early leader Harrison by a matter of just over a second each in the early stages the final lap of the four-lap thriller after Hickman had set his stall following a blunder on lap one.

Hickman had to overcome an early upset in the Superstock outing when he overshot the course at Braddan Bridge on lap one and had to make a U-turn to re-join the race. The slip up cost him about 20 seconds of time. But not to be left behind Hickman got his head down at Oak Tree as he rejoined the circuit and absolutely caned the BMW underneath him to smash the Sstk lap record by posting a time from Bungalow to Bungalow of 16m 53.09s for an AVERAGE speed of 134.077 – that’s just over 0.3mph off the fastest ever lap of the TT which was set by Dean Harrison during Saturday’s Superbike race. But better was yet to come.

For the, essentially road-kitted bikes, Hickman was pushing the bike you can buy over the counter as hard and fast as the factory supported motorcycles that’d competed a few days before.

On the last lap Dunlop managed to close Hickman down to just over 0.1s as the pair got to Ramsey Hairpin teasing the prospect of the first ever dead heat at the Island. A few miles later at the Bungalow though Hickman had stretched the lead over Dunlop to a couple of seconds.

From Ramsey Hairpin to the Bungalow Hickman posted the fastest EVER sector seen at the TT with it taking just 3m 11.671s to get between the two points, that beat Dean Harrison’s new sector record for that part of the circuit which he’d set on Saturday in the Superbike race.

Hickman was in pulsating form from the Bungalow though and stretched his lead to over 4s ahead of Dunlop to bag the absolutely fastest ever lap on a Superstock bike – 1.34.403mph. That’s less than 0.03s slower than the new outright absolute record set by Harrison on Saturday with the Superbike outing.

Hickman said: “I dont get emotional normally but I made it really hard for myself with the overshoot at Oak Tree. Such a mistake at the start and I was just a bit too late on the brakes into Braddan and a big tank of fuel – I just had to go straight on.

“I was so angry with myself. The first board I got was P9 and I though ‘that’s it, I’ve blown it’. But that’s the hardest I’ve ever ridden a bike around here.

“The wind was strong and picked me up a couple of times I nearly ran off the track a couple of times but I had to sort of gauge it as we went along. But to be here like this after riding so hard for so long, it means so much.”

Dunlop said: “Fantastic race. It was a big pace and I struggled with stability but I got dialed in and I thought that on the last lap I could have a go at him but I got caught in back markers and that was that.

“I’m not complaining about that, it’s racing and I’m taking nothing away from Peter, he rode really well. I lost some of my brake adjuster on the first lap – which might have been something to do with the bird strike early on, I’ve hit another bird with my helmet too – and I was having to pump the lever but that’s not an excuse.”

Harrison added: “After riding that hard, I’m over the moon. Not a million miles away in terms of speed to be honest, I were getting boards saying P3, P2 whatever but I just had to get my head down.

“I’m over the moon to get third. To get a third with these lads running at this pace, there’s not much more I could do.”