Ducati has unveiled a pair of tricked out Multistrada 1260’s – as it looks to reclaim the two-wheel title at the legendary Pikes Peak mountain race, which kicks off in Colorado on June 24, 2018. 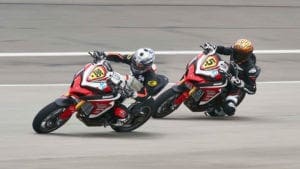 Back in 2012, Carlin Dunne set an outright record in the Heavyweight Motorcycle class on a Multistrada 1200 – a record which stood until last year, when Chris Fillmore set a new best time of 9:49.625 minutes on a 1290 Super Duke R.  But for 2018 the iconic Italian manufacturer wants to reclaim the record on the mountain. 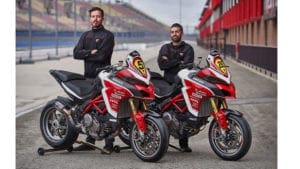 Leading the charge for Ducati is former record holder Carlin Dunne, and the current middle-class record holder Codie Vahsholtz. But we’re most exited by its upgraded Multistrada 1260. Just look at it… 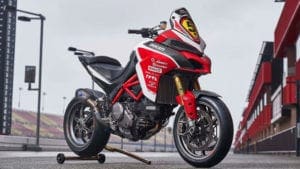 First of all, Ducati has stripped it back, shaving weight where possible – removing the engine protection, the handguards, the mirrors and all lighting elements. Its wheels have been switched to magnesium forged ones from OZ, its exhaust has been swapped for a titanium Termignoni system – and Race Tech has messed around with its Öhlins suspension. 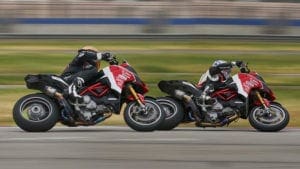 For braking, the Pikes Peak ‘Strada comes with new calipers and a new master cylinder – there’s also a new sets of footpegs, which have been designed to increase its lean angle and optimise the riding position.

It doesn’t end there though. Its engine has been tweaked too. With no obligation to meet Euro4 regulation, Ducati engineers were free to reprogram the engine, and offer more power.