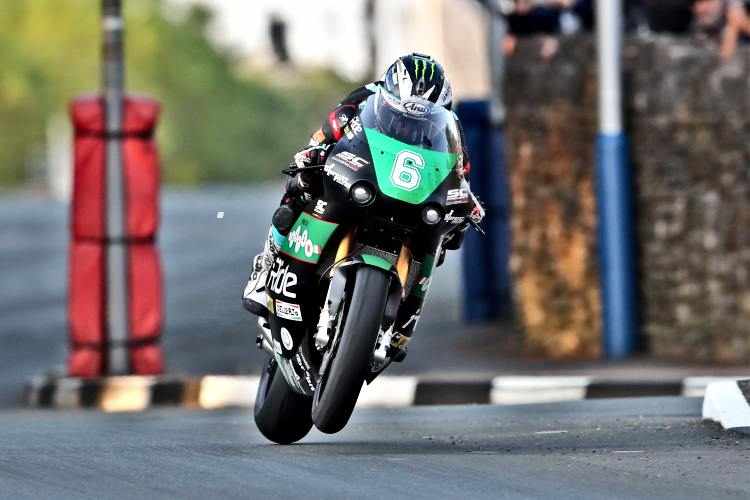 The win gives Dunlop his third TT win of the week and on a tally of 18 wins now moves him to third overall on the all-time winners list at the Isle of Man TT behind John McGuinness on 23 and Joey Dunlop – Michael’s Uncle – on 26.

With a warning of melting tar in the high heat on the Island, specifically around the Ginger Hall area of the course, you could have been forgiven for thinking that conditions weren’t on for a fast race, but Dunlop had other ideas.

At the start it was Michael Rutter and Dan Cooper who were virtually together at Glen Helen on the first lap and Ivan Lintin and Dunlop repeated the look a few seconds later – but first to lead was Derek McGee who was 0.48s ahead of Lintin with Dunlop in third just 1.6s behind Lintin.

With David Johnson retiring from the race on the first lap, it was Lintin who carried on into the lead and as he crossed the line to start lap two it was Lintin setting a new lap record for a standing start in the class with a 121.603mph lap (18m 36.981s) on the Kawasaki Z650. Derek McGee was 5.7s down on Lintin in second with Dunlop third, 1.081s behind Lintin. All of the top three were inside the old standing-start lap record of 120.848 set by James Hillier.

Dan Cooper, Michael Rutter, Michael Dunlop were virtually side-by-side in the second lap as they scrapped it out on the road, Lintin was looking in charge at Ballaugh though with a 6.6 second lead over Dunlop who in turn led McGee by 2.4s.

As the leaders made their way into the pits for the stop at the end of the second lap, it was all drama as Dunlop was the first to show recording a new lap record of 122.257mph (18.31.0003) – there was no sign of earlier leader Lintin as the leading order shuffled around out of the pits.

Without Lintin leading the race – he had stopped at Bedstead with a mechanical failure – it was now Dunlop on the Paton who was left in charge with McGee second 4 seconds behind Dunlop, James Cowton was third a full 39.3s further back.

On to lap three and McGee really got a run on with his ER-6 Kawasaki catching and passing Dunlop on the timesheets to lead the race by 3s ahead of Dunlop, Peter Hickman was a long was back in third, some 48s back and he was just 0.6s ahead of Michael Rutter on the clock. By Ballaugh though the advantage for McGee had been cut by Dunlop to 1.5s as the Paton man hunted the new leader down.

By Ramsey on lap three it was Dunlop who had taken over the top spot on the clock, catching and passing McGee to put the Kawasaki man 1.2s behind. Hickman looked happy in third at Ramsey with a 4s lead over Rutter.

The Bungalow a little later proved how quick McGee is over the first part of the Mountain though with Dunlop’s lead slashed to just 0.5s as things geared up for a dramatic finale. In the end, however nobody could pressure Dunlop on his Lightweight charge and for the first part of the last lap any attack from McGee had been negated by Dunlop though who managed to extend the gap to 5.4s at Glen Helen.

Hickman retired at Union Mills on the final lap with a mechanical problem which meant that Michael Rutter got his last Lightweight TT lap of 2018 underway in third place although he was more than 1m 09s behind McGee.

After the race Dunlop said: “We had a small issue at the start of the race. I knew it wasn’t going to be a sprint race, I said it was time I got going so I just battered into it. I didn’t want to go mad at the start and I saw someone from behind was coming.

“I thought screw this and pushed on to get the win. I was planning my race, I didn’t want to ruin the bike so I settled in. But this is my 18th win and the first one in the class. There’s been some people saying I can’t ride the twin so hopefully this will shut them up now!”

McGee added: “I’ve no words but thanks very much to the team and sponsors. I don’t know what to say to be honest.

“The boys did a super fast pit-stop and it helped a bit.”

Rutter said: “I was really happy with that, I’ve not had the best of practices this week and I was missing gears in the race – which I think was me, not the bike – but I got my head into it and put my head down and just went for it.”