Fourth win in California for the championship leader, who increases his lead to 75 points with five rounds to go
Jonathan Rea (Kawasaki Racing Team) has taken his second win of the weekend at the WeatherTech Raceway Laguna Seca, becoming the most successful rider in MOTUL FIM Superbike World Championship history at the US racetrack in the process. The Northern Irishman was again unstoppable in the GEICO US Round, flying to the lead inside eight laps despite having to start from the back of row three. Second went again to Chaz Davies (Aruba.it Racing – Ducati), with Eugene Laverty (Milwaukee Aprilia) completing the podium in third.
Rea wasted no time at the lights. By the end of lap one he had managed to climb from ninth on the grid to fifth; three spins around Laguna Seca later, he was already up to second and chasing race leader Laverty, at a pace of over one overtake per lap. Meanwhile, behind, Marco Melandri (Aruba.it Racing – Ducati) crashed out, the third time in the last seven races that the Italian has failed to score any points. 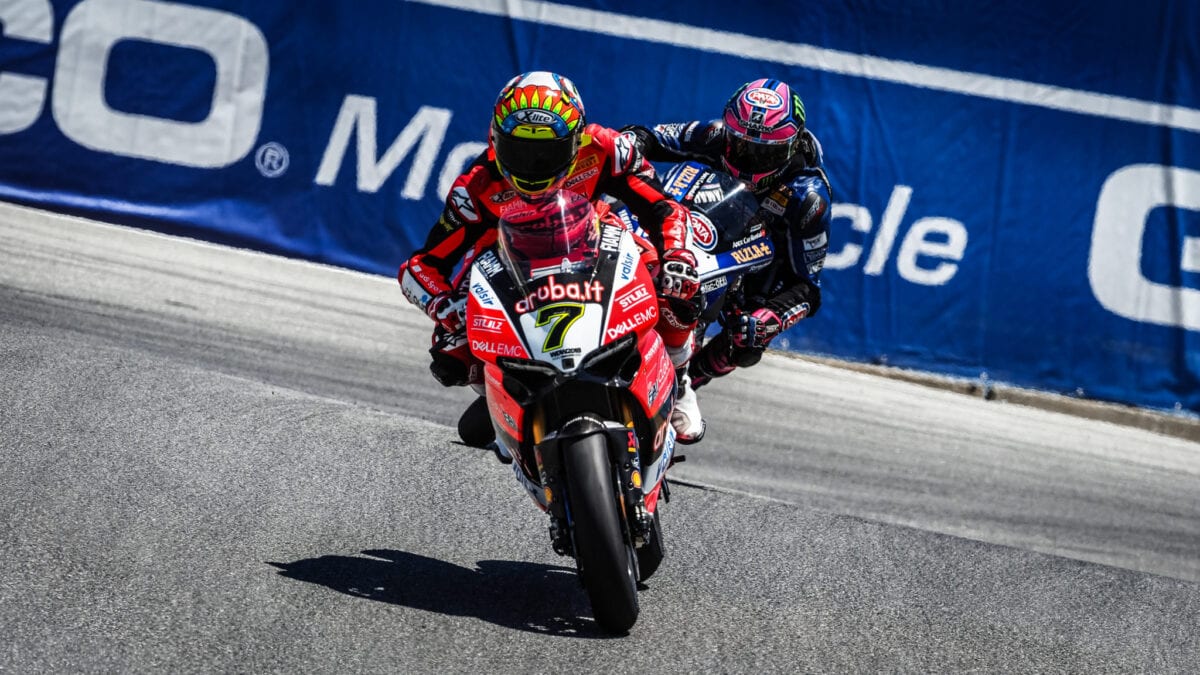 It didn’t take much longer for the Race 1 leader to pass Laverty either, picking off the Aprilia rider with ease through Lap 8. A similar story to yesterday: two thirds of the race left, an open track ahead, and an unbeatable race pace. When Rea finds his groove and is this confident, the three-time champion is second to no one. Even Davies, who performed another brilliant climb up the ranks and passed Laverty into second with eight laps to go, couldn’t close the gap and had to settle for second.
Just as on Saturday, however, there was plenty of action for the remaining rostrum place. Laverty, now in third, was quickly hunted down by the two Pata Yamaha riders. But the pair squabbled amongst themselves just enough laps for the Irishman to keep both a second away and clinch his first podium of the 2018 campaign, also a first since Sepang 2014. It’s been a long and tough journey for Laverty since he returned to the WorldSBK paddock last season, but the hard work is slowly but surely paying off.
The battle between Round 6 and 7’s race winners, van der Mark and Lowes, saw the Brit finally emerge victorious with two laps to go thanks to a brave pass in the run-up to the Corkscrew. A bit of magic from the Lincolnshire rider to close the gap with his teammate in the standings to just 32 points. Van der Mark meanwhile couldn’t make the best of a fantastic start, which saw the Dutchman rise to second at Turn 1, and crossed the line in fifth. 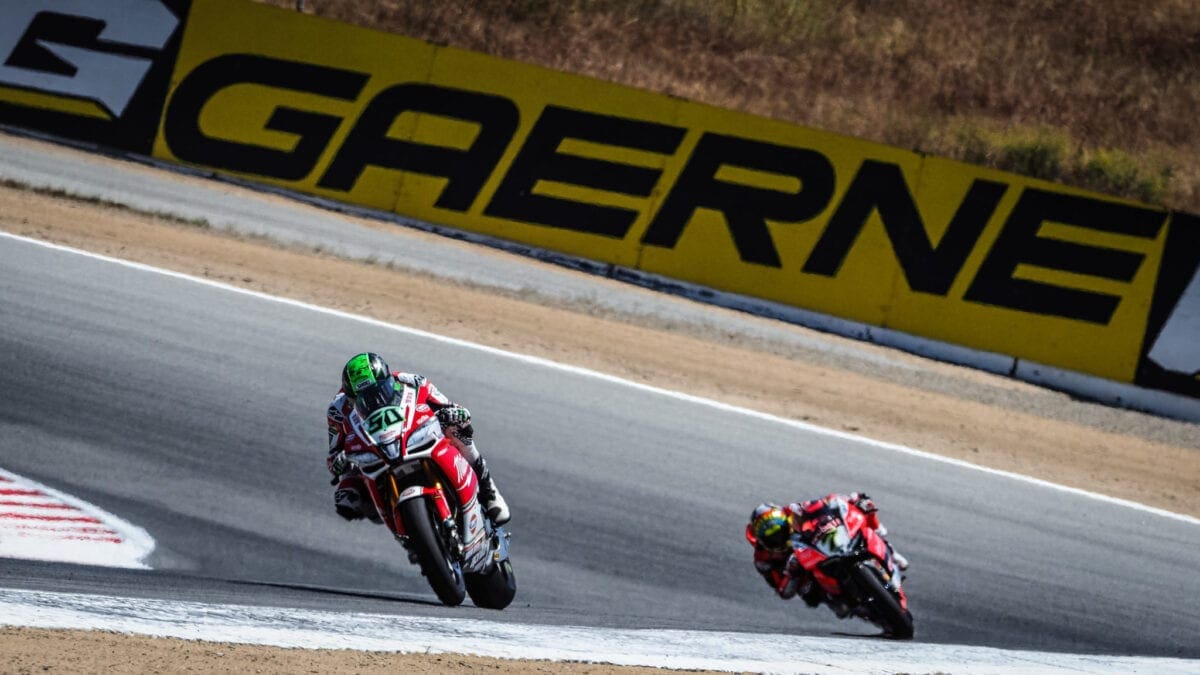 Xavi Fores (Barni Racing Team) repeated his Race 1 performance with sixth at the flag, a sign that the Spaniard is building back his form after two forgettable rounds. Behind him was fellow Spaniard Jordi Torres (MV Agusta Reparto Corse) in seventh, ahead of Tom Sykes (Kawasaki Racing Team WorldSBK) in eighth. Sykes is a three-time winner at Laguna Seca, but on Sunday he found himself collapsing down the ranks from the start and it never quite worked out throughout the 25 laps for the Kawasaki rider, closing a disappointing weekend.
Jake Gagne (Red Bull Honda World Superbike Team) went one better than on Saturday, crossing the line in ninth and taking his personal best result in WorldSBK. A fantastic weekend at home for the Californian, who crossed the line ahead of Loris Baz (GULF Althea BMW Racing Team) in tenth and Leandro Mercado (Orelac Racing VerdNatura). A special mention for Karel Hanika (Guandalini Racing), who crossed the line in a promising 14th, scoring points in both races at Laguna Seca on his WorldSBK debut. 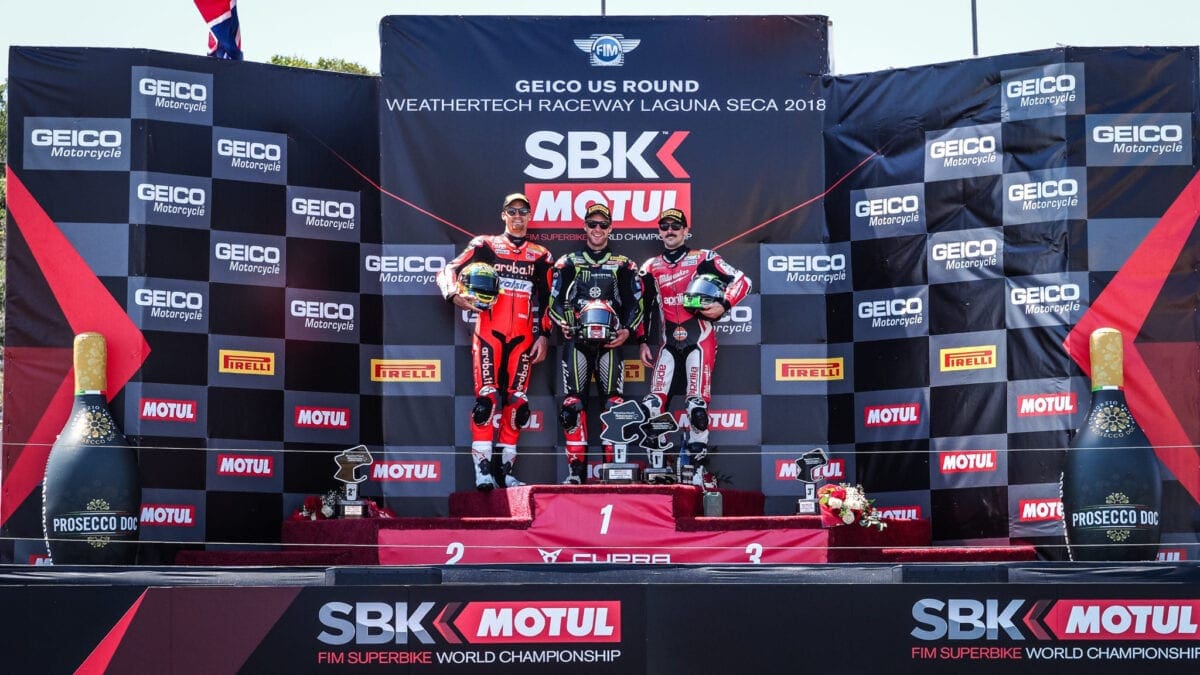 WorldSBK is back in two weeks for the last stop before the summer break! MoreBikes will bring you the results from the Misano Circui, July 6th to the 8th.