MoreBikes has been out to Italy for a first ride on BMW’s all new C400X scooter – and took the chance to put it through its paces on the outskirts of Milan, taking in the busy urban sprawl, some motorway miles, and a selection of beautiful twisties and tight hairpin turns. 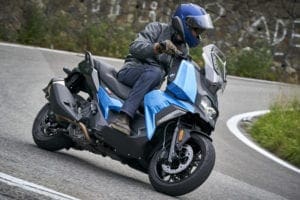 There’s some real money to be made in the mid-sized scooter market. And BMW know it. The sector turns over a fairly consistent 35-40,000 units a year worldwide – and BMW reckons it stands a very good chance of making a dent in that number with its all new C400X.

First impressions are good. In fact, photos don’t quite do the little scooter justice. It’s aggressive, almost muscular front end is undeniably a BMW – in fact, it even shares the same headlight unit as the new F850GS. Overall build quality is good too – as you’d expect from a BMW. Interestingly though, the machine is made out in China, on a dedicated BMW production line at Loncin. Don’t worry though; they know what they’re doing. They used to build BMW’s almost indestructible F650GS. 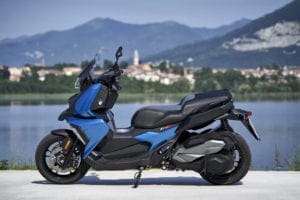 If you compare the C400X to the other mid-capacity scooters on the market (namely Yamaha’s XMAX 400, Suzuki’s Burgman 400 and Kymco’s Xciting 400i), the C400X seems more compact and a little sportier than the competition – which is perfect, when you consider its intended purpose; urban commuting. Admittedly, storage space is at a bit of a premium as a result. There are the usual two lockable cubbyholes at the front, and the right hand even comes with a 12V plug-in point. But it’s the underseat storage that’s really compromised. Sure, there’s enough room to fit a half-face lid and a few other bits and pieces, but compared to its competitors, there’s not a huge amount of room. BMW have been quite clever though, including a Flexcase system which allows you to expand the underseat storage area to allow space for a full-face lid to be stored alongside a half-face one – although, you can only use it when the scooter is stationary. 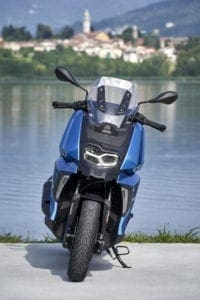 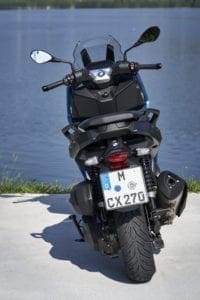 Settling into the seat for the first time, I found the C400X exceptionally comfortable – with a very natural riding position. It comes with a 755mm seat height as standard, which (with my 6’ 1” frame and 32” legs) I could settle on with room to spare. Ok, so it doesn’t offer the roomiest of footwells, but there’s ample room to get settled. It weighs in at 204kg (6kg less than Yamaha’s XMAX 400), but it’s so well balanced and well-built that it never truly feels ‘big’. 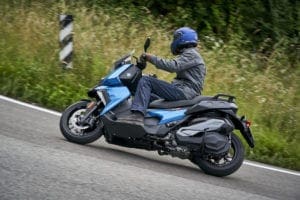 From an equipment and accessory perspective, BMW offer an abundance of options, allowing you to tailor the C400X to your needs. I was riding the top specification model, with BMW’s own integrated connectivity system, keyless ignition, heated seat and grips and LED daytime running light – all in all, the kit would set you back close to £1000, on top of the projected £6000 for the standard model. I say projected, because prices for the UK are yet to be set – but it’s highly likely we’ll see a high-spec model at a lower price than if you were to add the accessories separately.
But now it’s time to get into what it’s like to ride. First, let’s talk about the heart of the BMW C400X; its 350cc powerplant with CVT (twist and go) transmission. In practice, it’s a capable little motor, helping the scoot to be sharp off the line and get the jump on traffic, while delivering good levels of torque right through the rev range up to an indicated top speed of 86mph. Plus, BMW reckon it’ll return 80mpg and a tank range of over 220 miles. Not bad at all. 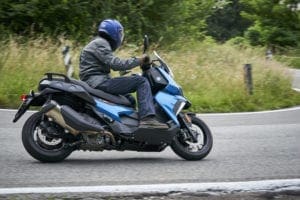 For braking, the C400X comes with twin discs and four-piston radially-mounted Bybre (Brembo’s Chinese subsidiary) calipers at the front, and a single disc with single piston floating caliper at the rear. They offer decent power – and in fact, BMW claim that at a speed of 62mph, stopping distance is 38 metres – which sounds fairly impressive. And out on the road, I was impressed. They’re sharp, without being aggressive – which inspires confidence in their ability. Of course, the brakes are also assisted by two-channel Continental ABS. Admittedly, I did find the ABS to activate fairly easily, but even when grabbing a handful of front brake at high speed and pushing the C400X to its limits, the little scoot stayed in shape and I felt totally in control.

Suspension is a fairly unsophisticated affair in the form of telescopic forks at the front and a twin shock at the rear – but they’re more than up to the job. I found the suspension to offer a really comfortable, yet surprisingly firm ride – while offering a reasonable compromise between performance and comfort. I did my best put it through its paces, bobbing around into potholes, and launching over speed bumps, and it handled the C400X handled it all in its stride – and I was no worse for wear as a result. What more could you ask for?

From a handling perspective, the C400X is at the top of its game. I’ve spent a fair bit of time on some of its mid-sized scooter competition, and I reckon the BMW is the most agile out of the lot. It handled long sweeping twisties and tight switchback even better than I thought it would – and in traffic it’s truly brilliant, with a tight turning circle and easy handling. Motorway work is easy too, even as you push the 350cc engine right to the top of its power band. The engine never feels all that stressed, it’s stable and assured, and the wind protection isn’t too bad either.

Ok, so scooters aren’t for everyone. And there’s a big contingent out there that would say why would you spend £6000 on a scooter, when you could get your hands on a ‘proper bike’? But they’re missing the point. The C400X is very well built. It handles well, stops well, and the engine is punchy and capable. In short, scooters are practical – and the new BMW C400X is right up there with the best of them. Sure, there’s a little less underseat storage than some of its competition, but it’s also lighter, narrower and more agile than them too. It all depends on your priorities.
If you’re looking for a new set of wheels to get you around in style, the BMW C400X could be the motor for you. It’s as capable blasting down B-roads as it is carving through the city traffic. You’d be amiss not to consider it. 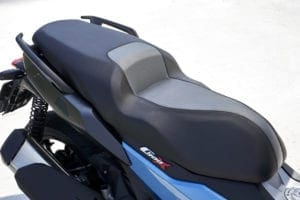 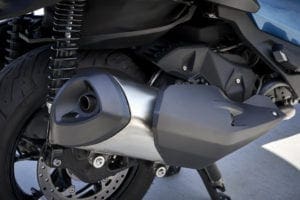 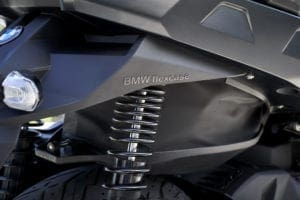 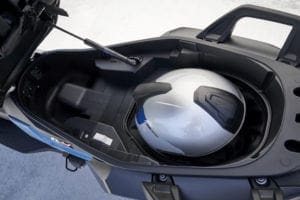 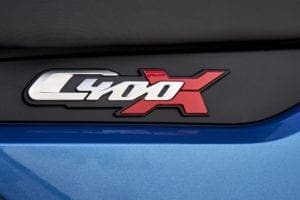 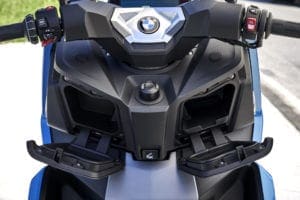 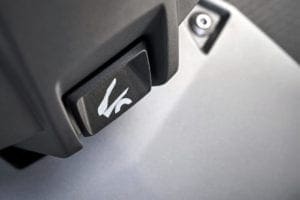 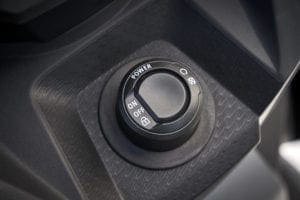 BMW is really pushing its connectivity package for the C400X. Essentially it’s a clever TFT-Display and BMW Motorrad Connected app. The headline act is its own sat-nav system, which works through the app – and is displayed on the TFT in the form of a basic arrow-based system. The app also allows you to find out where you last parked, check the weather, see where the nearest petrol station is, and view various bits and pieces of data from the machine, including mileage, riding time and average speed. Clever stuff. 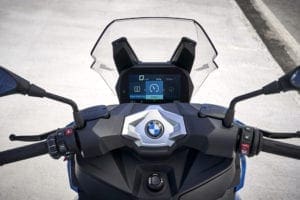