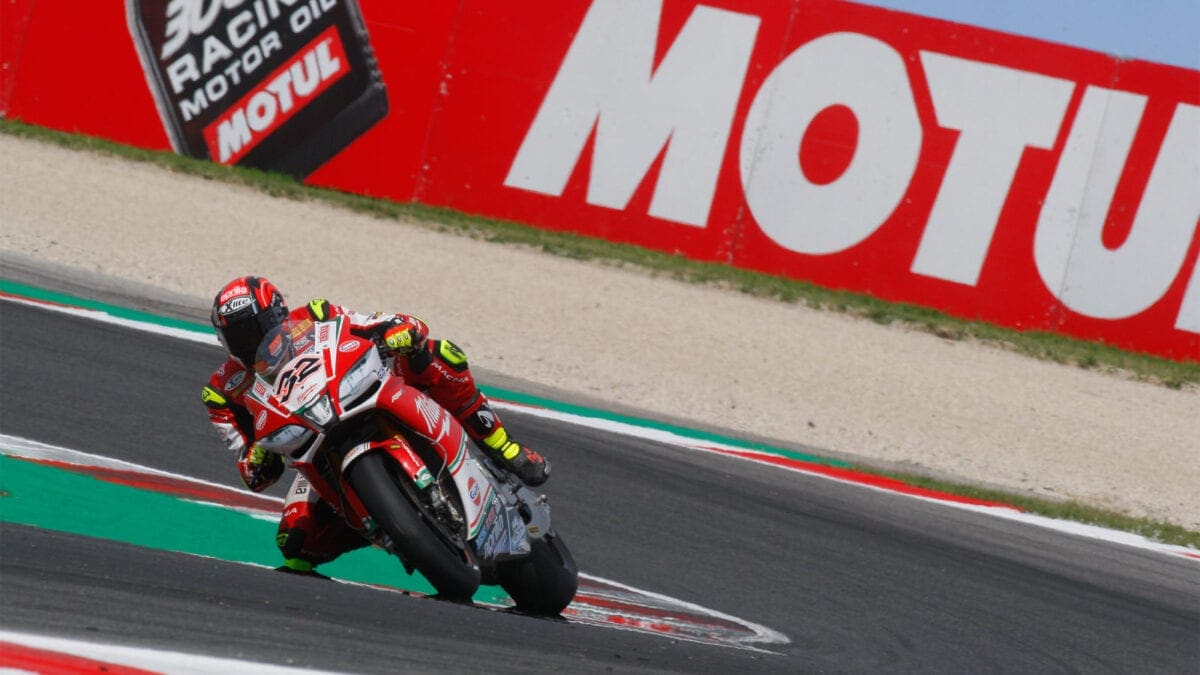 Just Torres and Mercado try out damp Misano track in Friday closer, with Savadori ahead of pack
With showers coming down over the Misano World Circuit Marco Simoncelli since midway through the FIM Supersport World Championship FP2, many of the MOTUL FIM Superbike World Championship riders would have been hoping that their luck would be slightly different by the time Free Practice 3 rolled around. But it was not to be: the track remained wet, and most of the riders remained indoors during the forty-minute session, leaving Lorenzo Savadori (Milwaukee Aprilia) as the fastest rider of the day following his blistering FP2 run.
It was the last Friday session before the summer break, in the sweltering Italian heat, a stone’s throw away from the Adriatic Sea… So, of course, it rained. But Savadori will not be too displeased, leading a surprising Aprilia one-two at the end of Friday. The Italian recorded one of his best results of 2017 at Misano, ending Race 2 in sixth, but judging by his FP2 pace the rider from Ravenna will hope to rank higher this year in front of his home fans.
He will also be encouraged by his teammate’s pace since Laguna Seca, showing the great improvements Milwaukee have made to the RSV4-RF. Eugene Laverty (Milwaukee Aprilia) finished the day in second, and after ending a four-year-long run without a podium at the GEICO US Round, the Irishman could be in contention again at Misano. 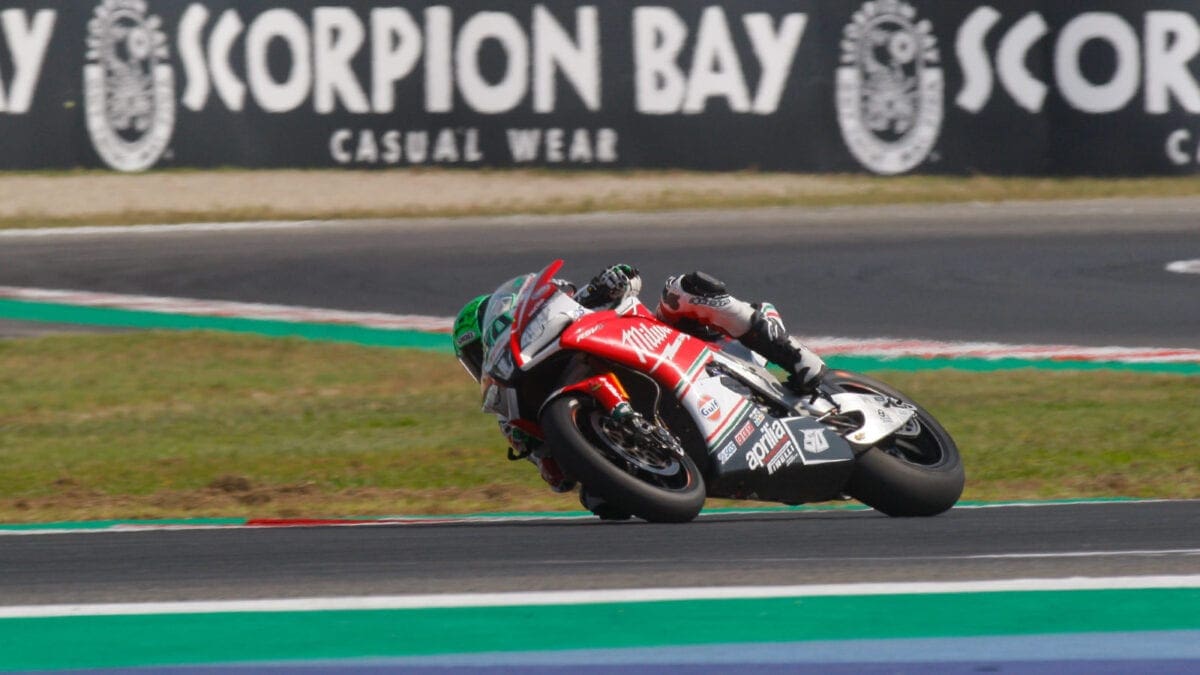 Championship leader Jonathan Rea (Kawasaki Racing Team WorldSBK) ends Friday in third position, ahead of his closest championship challengers. The Northern Irishman was just one thousandth of a second from Laverty, and after dominating most of Friday should be pleased going into the weekend, even considering the lack of track time.
Loriz Baz (GULF Althea BMW Racing Team) finishes the day close behind Rea in fourth, with Alex Lowes (Pata Yamaha Official WorldSBK Team) in fifth, and Leon Camier (Red Bull Honda World Superbike Team) in sixth. Marco Melandri (Aruba.it Racing – Ducati) was the second best home rider at Misano in seventh, and will be hoping to repeat his 2017 Race 2 win tomorrow.
With Xavi Fores (Barni Racing Team) in eighth, Chaz Davies (Aruba.it Racing – Ducati) in ninth, and Tom Sykes (Kawasaki Racing Team WorldSBK) in tenth completing the Tissot Superpole 2 positions, Michael Ruben Rinaldi (Aruba.it Racing – Junior Team) and Michael van der Mark (Pata Yamaha Official WorldSBK) were the biggest losers from the FP3 downpour. Rinaldi, on his return to WorldSBK after sitting out the Laguna Seca round, was just 45 thousandths of a second away from qualifying through to the Superpole 2, while van der Mark in twelfth will also have to fight through SP1 tomorrow. 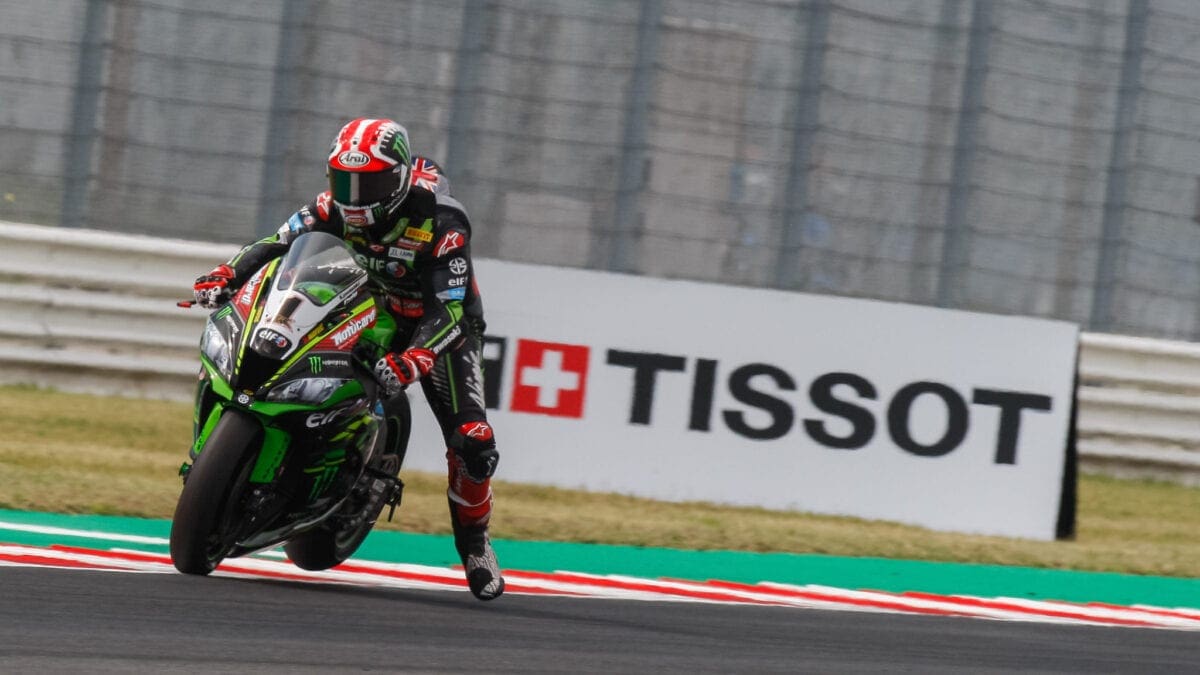 Only Jordi Torres (MV Agusta Reparto Corse) and Leandro Mercado (Orelac Racing VerdNatura) tried out the damp Misano track in FP3, with both men over twenty seconds slower than their previous best times.