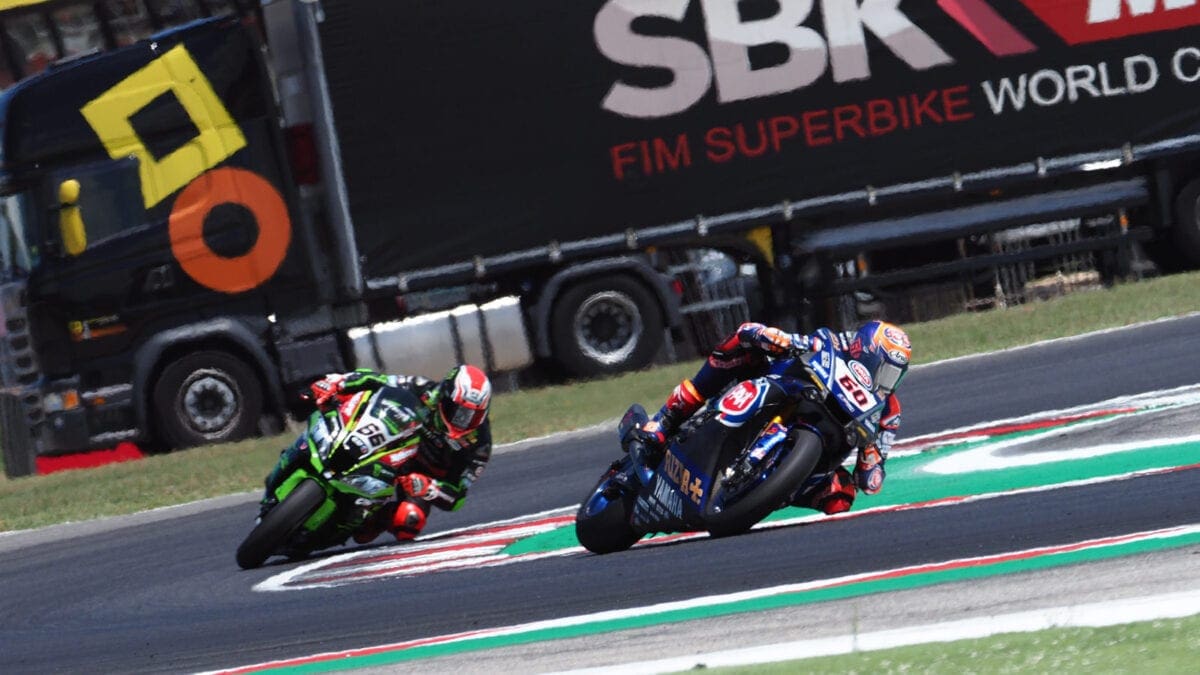 Jonathan Rea (Kawasaki Racing Team WorldSBK) has taken his second win of the weekend at the Misano World Circuit Marco Simoncelli after a scorcher of a race around the Rimini track. If yesterday was a relatively comfortable affair for the defending champion, on Sunday Rea had to dig deep and get the best out of his incredible talents, making several stunning passes on his way to beating Michael van der Mark (Pata Yamaha Official WorldSBK Team) with three laps to go.
With the riders 21 laps away from a two-month summer break and everyone eager to impress, the opening minutes were nothing short than all-out war. Xavi Fores (Barni Racing Team) made a blistering run at the lights, flying into first place, but a technical issue ended the Spaniard’s race just two laps later. Meanwhile, Rea jumped straight up to fifth, but was then blown away by Chaz Davies (Aruba.it Racing – Ducati) through lap 2.
With van der Mark making the most of the open track ahead, Rea won over two thrilling battles with the works Ducati bikes. A first joust with Davies saw the defending champion coming out in front after an ambitious move through Turn 14. Then, with both Rea and Marco Melandri (Aruba.it Racing – Ducati) finding their way past Tom Sykes (Kawasaki Racing Team WorldSBK), the pair engaged in an electric battle all through laps 7 and 8, trading places several times for second. 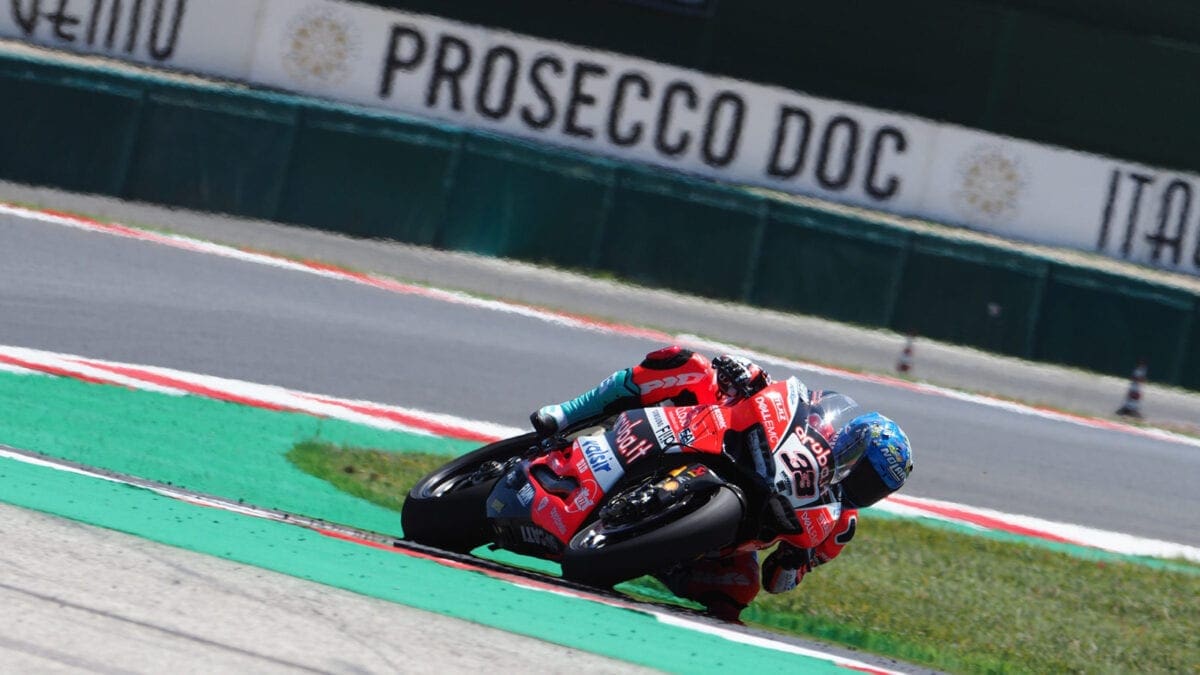 Ultimately, Rea prevailed again, and began his hunt of the race leader, now over a second ahead and twelve laps around Misano to go. The Kawasaki rider finally caught van der Mark with five laps to go – and so did Melandri, hanging on to the ZX-10RR’s pace. The trio went into the closing laps with less than half a second separating them. With the Ducati suddenly breathing down both their necks, Rea chose to make his move with three laps to go. A feint down Turn 1, a stunning pass down the inside through 2, and making it stick on the exit from the Variante del Parco: Rea first, and perhaps his hardest win of the season secured.
While he couldn’t fight back in the remaining turns, van der Mark had just enough left in the tank to defend his position from Melandri, taking second place at the flag and guaranteeing a fourth consecutive weekend with a Yamaha bike on the podium. Melandri couldn’t repeat his phenomenal win from last season’s Race Two, but a return to the rostrum in third will have left both the Ducati rider and the home fans ecstatic after a few difficult races.
Davies finally crossed the line in fourth, not quite able to consistently match the front pace. A difficult end after a promising start for the Welshman, who now enters the summer break 89 points behind Rea. He finished ahead of Sykes in fifth.
After a race to forget yesterday, Alex Lowes (Pata Yamaha Official WorldSBK Team) bounced back brilliantly in sixth despite having to start from the back of row 4. He endured a late charge from Lorenzo Savadori (Milwaukee Aprilia) in seventh, who managed to beat his teammate Eugene Laverty (Milwaukee Aprilia) this time around, with the Irish rider finishing eighth.
Loris Baz (GULF Althea BMW Racing Team) came back from his early crash in yesterday’s event with a ninth position, with Leon Camier (Red Bull Honda World Superbike Team) closing the top ten. Michael Ruben Rinaldi (Aruba.it Racing – Junior Team) was the best independent rider in Rimini, taking eleventh. 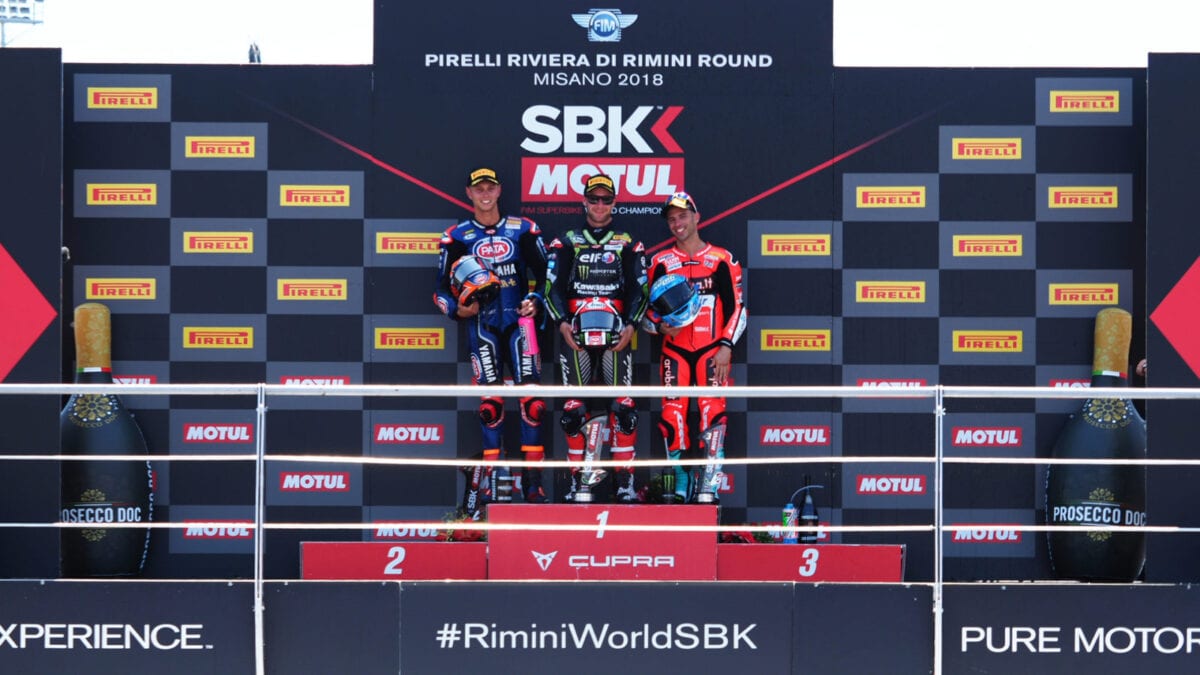