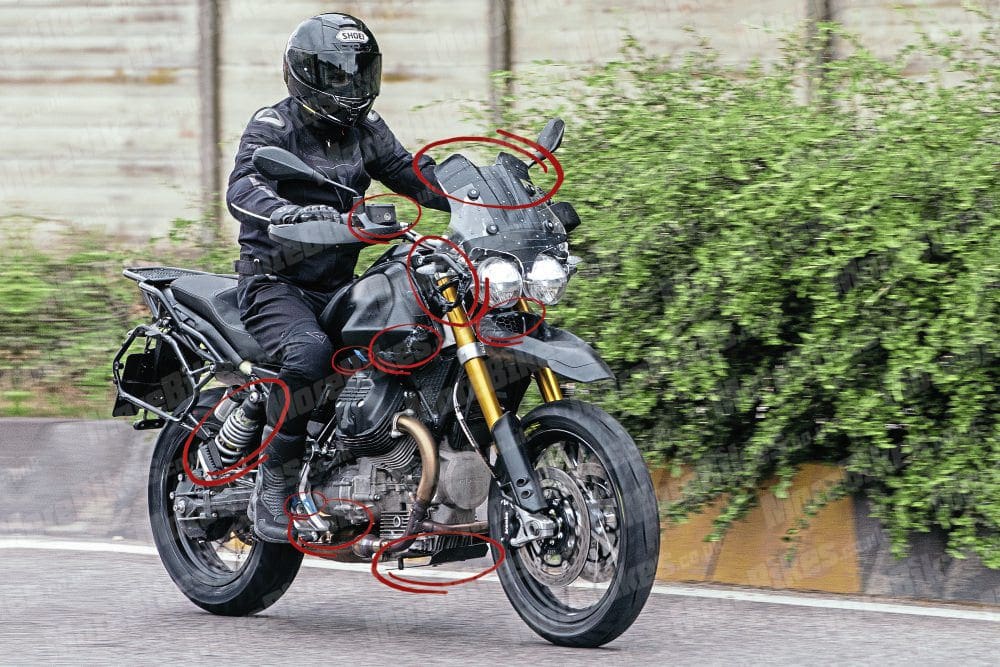 More images of the 2019 Moto Guzzi V85 prototype in action have surfaced – and they tell us a lot about the production version of the sexy on-road enduro-styled thumper. 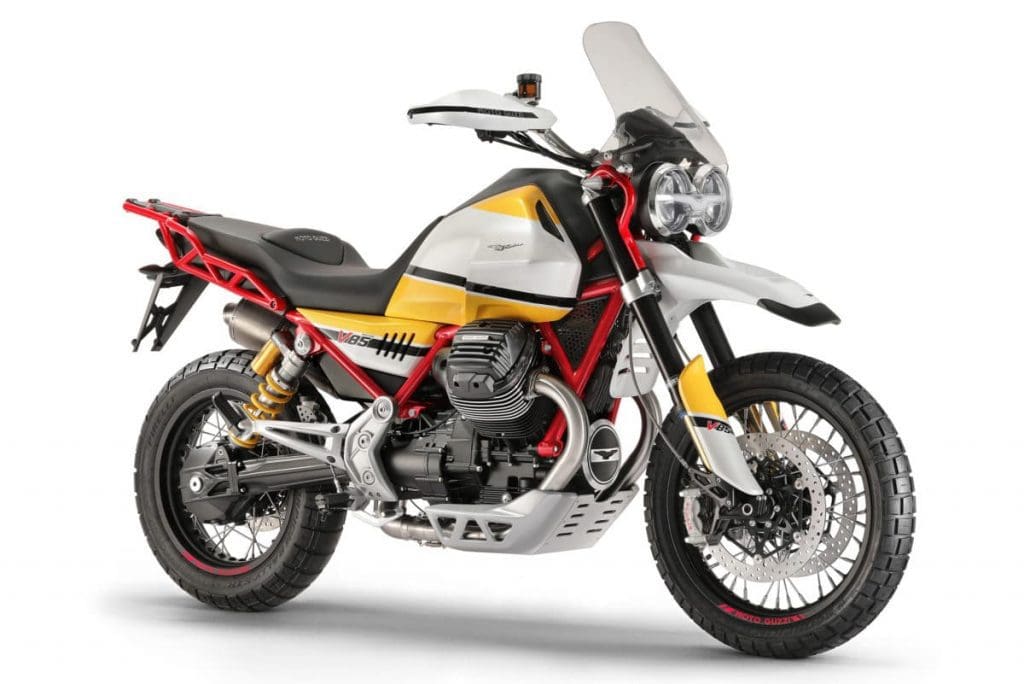 Here’s what looks to be the same as we saw on the sublimely sweet concept V85 Enduro shown at last year’s EICMA show in Milan:

But there’s a host of changes that we can see from the spy shots too, many of which are subtle and could easily be overlooked by the casual observer but each bit shows a real attention to detail by Guzzy over its new motorcycle.

Firstly, there’s that motor. One of the great tricks by the range’s designer Miguel Galluzi (the man who invented the Ducati Monster amongst many other great bikes) is that the Guzzi engines are mounted on a type of specialist rubber buffer. This buffer on each of the critical engine points is specially ‘tuned’ so that when the bike’s revs are under 2,000rpm the bike will rock from side to side in a traditional Guzzi motion as each cylinder files – go over 2,000rpm and the system counters the rocking system. That motion disappears and  the bike smooths out, it feels more like you’re riding a four-cylinder motorcycle. Clever stuff. And on the images you can see one of the rubber mounts in place so expect this bike to rock like a Guzzi at low, engine idling type speeds and be super smooth and torquey once you get rolling. 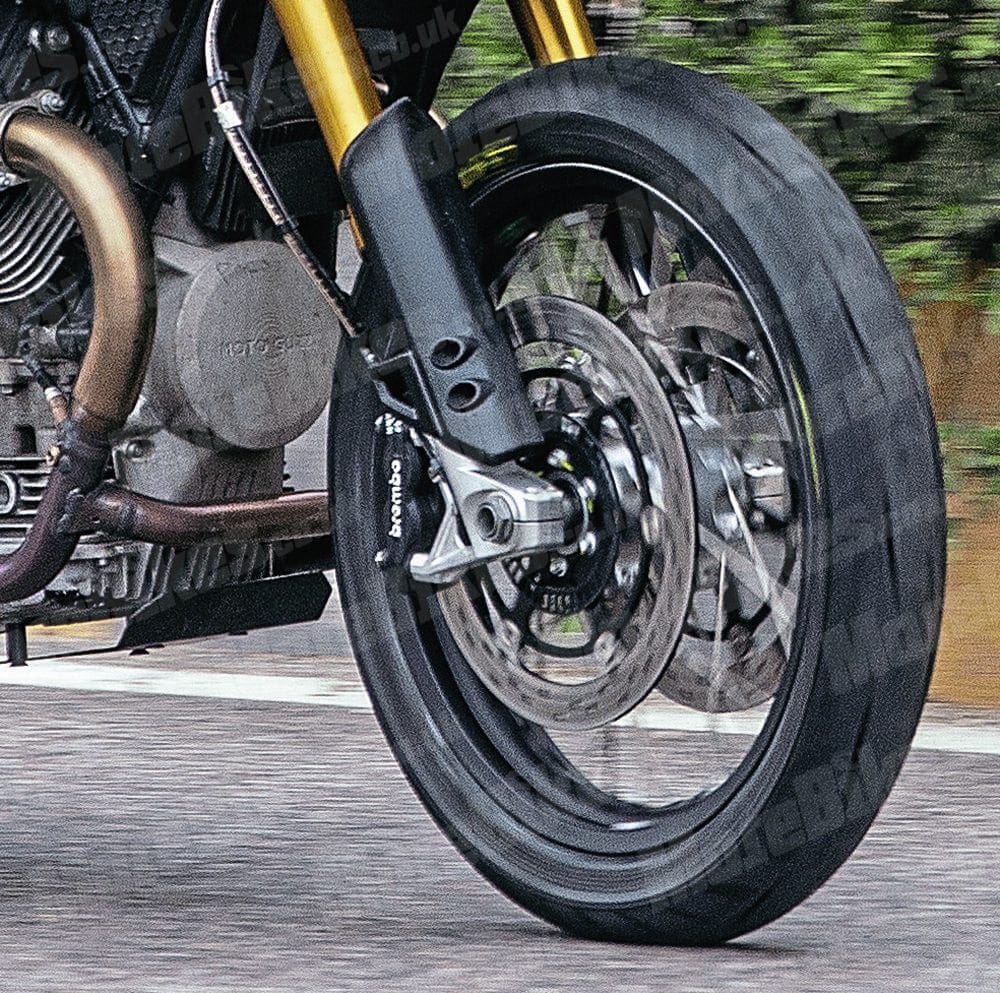 The latest spy shots don’t feature a finished sump but there is a bash plate bolted onto the bottom of the bike, suggesting two things – that the finished bike will have a large, pretty bit of bodywork over the sump like the prototype has and that the bike in the photos are also being used off-road at some point. 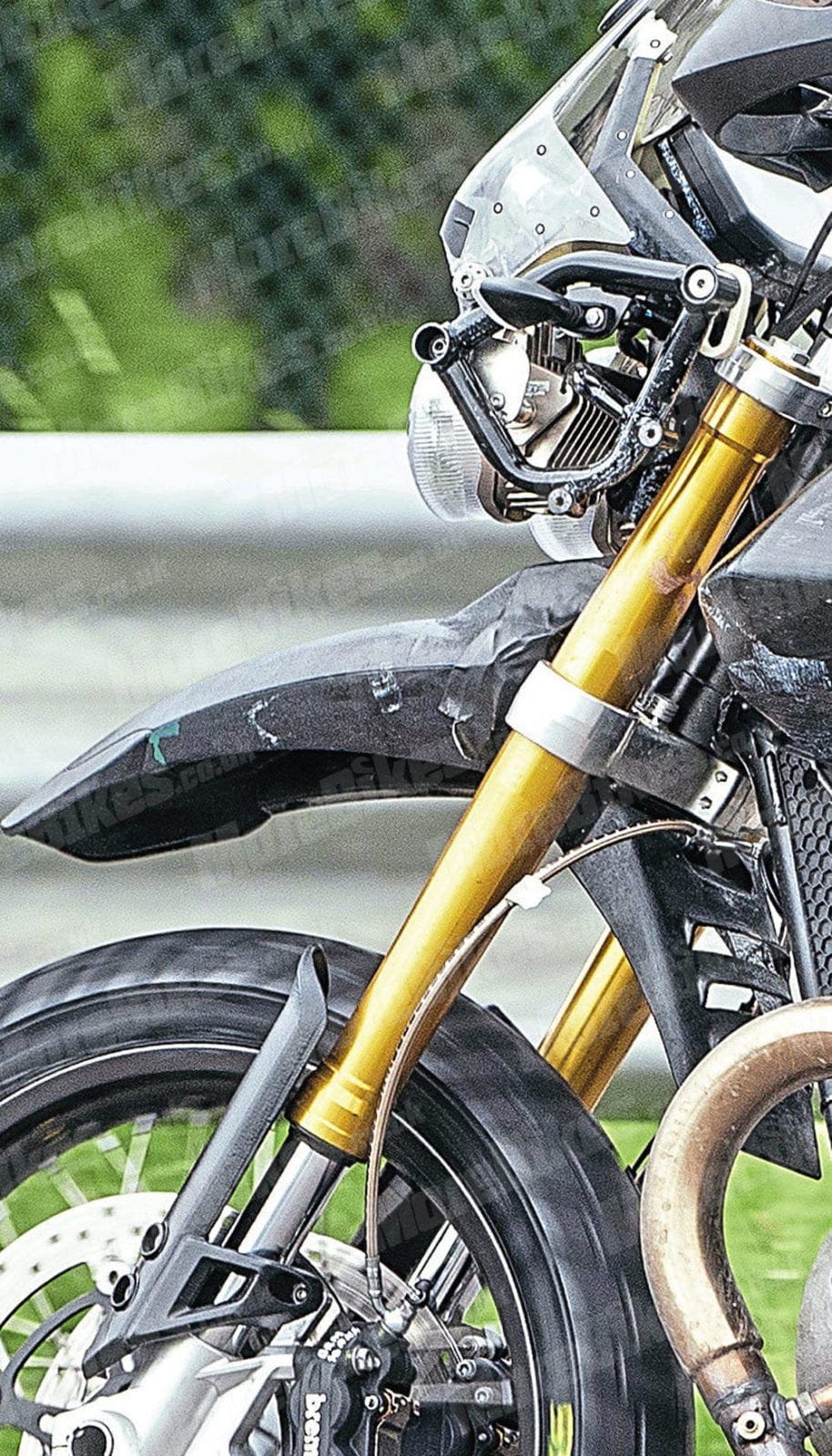 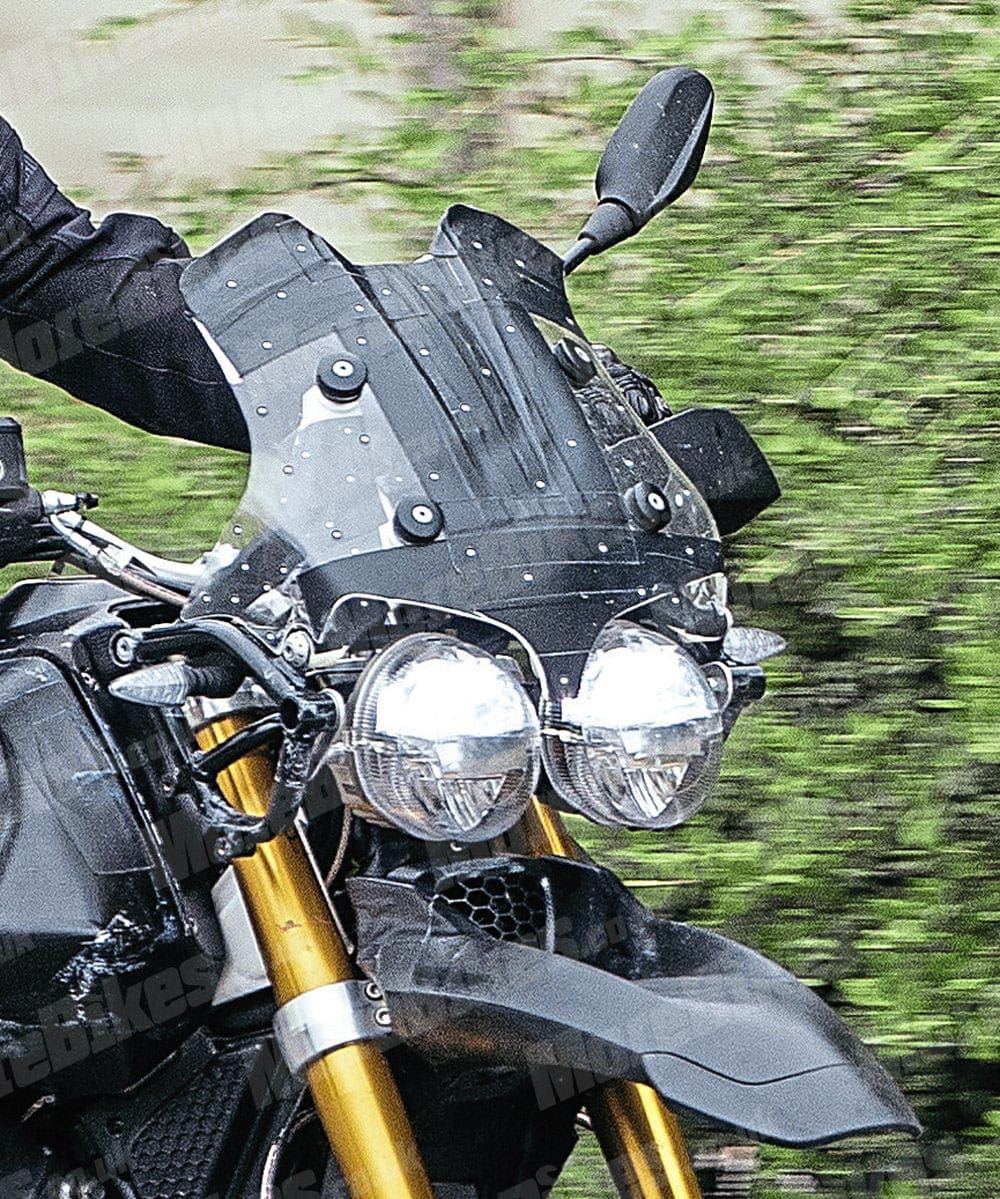 Move up to that big beaky mudguard and you can clearly see the large air-intake grill sited on it, just under the headlights. It’s a clever solutionin driving air to the motor’s mouth and the raised fins either side of the intake help direct the cooling stuff on the move. On the rear side of the mudguard are three steps which act as vortices generators to disturb the air as it passes over the back of the bodywork, helping to force more cooling are into the right direction for the motor as well as stabilizing the front of the bike at speed. It’s a similar idea to what you see on the visors of some helmets now. 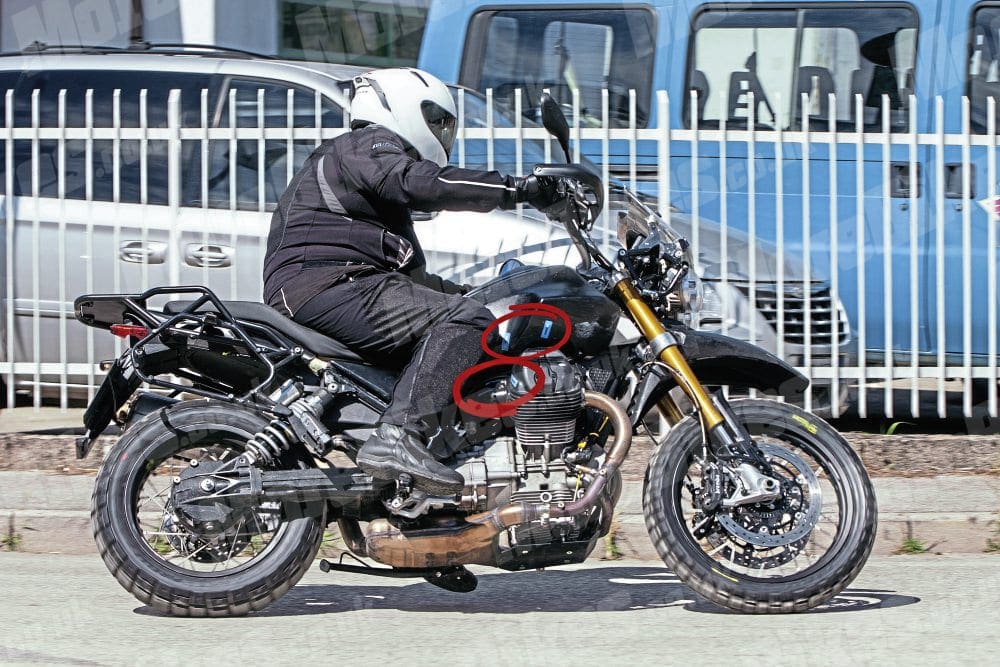 On the side of the headlights is a bodywork mount fixed in place without anything attached to it. This could be for bodywork to come around the side of the headlights, perhaps for an extension to the windshield top help deflect windblast from the rider. It could still be on the bike for test-measuring devices to be attached to though. We’ve been told that there are some additional bodywork bits to be finalized on the V85 so we think it’s the former.

The screen on the V85 is very different to what we saw on the prototype with the top of the screen itself kept low in the middle and two higher shoulders flaring  up in a dramatic looking way to get rid of head-buffering winds. The screen also has a large scoop pressed into it which runs right up the middle of the unit.

Our spy shots show that the V85’s front brake reservoir is different to the prototype’s but the huge handguards stay the same.

Under the petrol tank you can see that the production bike’s shape is seriously different to the scooped angular loveliness of the prototype and in our photos it’s easy to see why. It’s to do with heat dissipation. 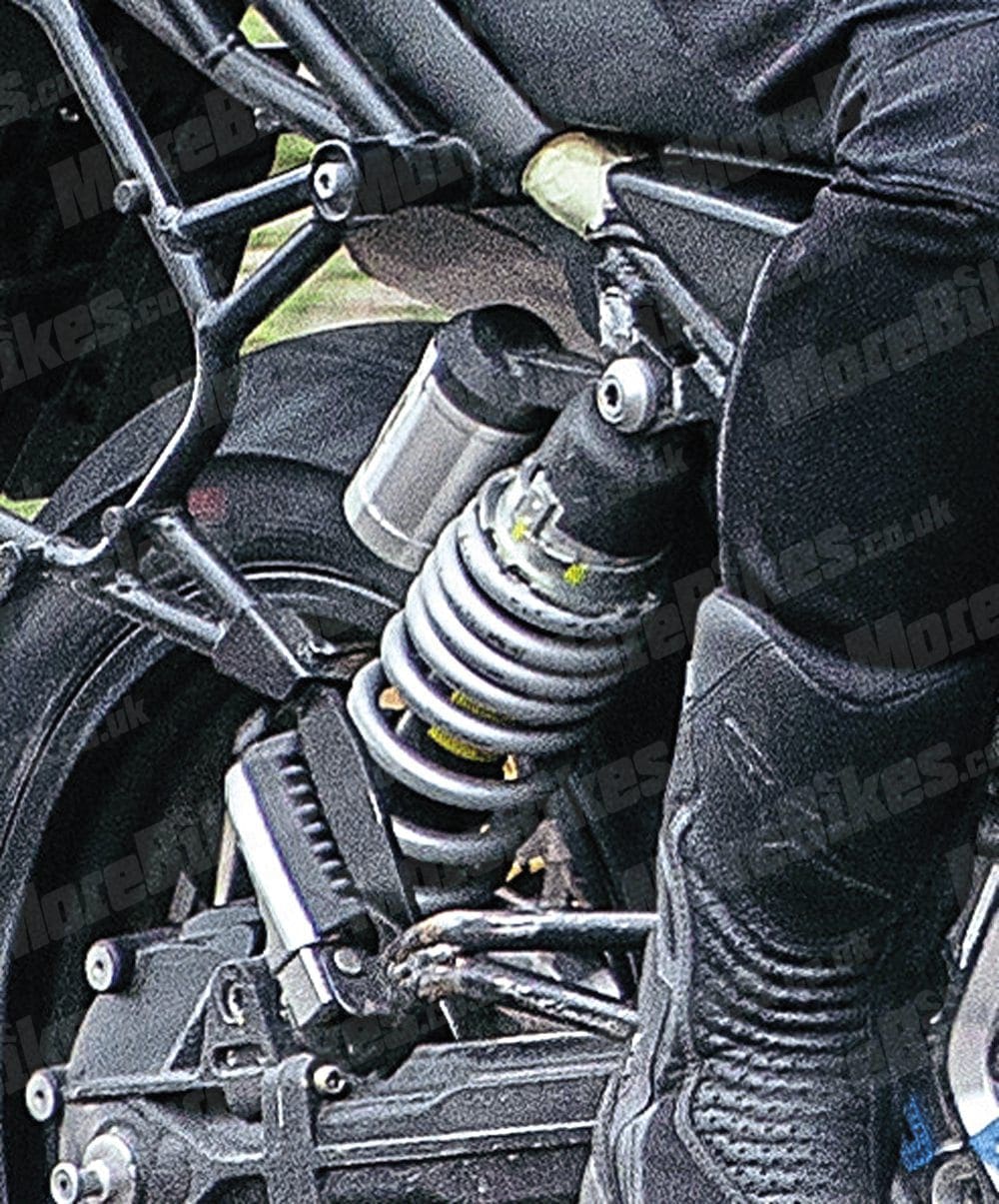 The bike’s rear shock is a simple white colour instead of the gold Ohlins unit seen on the prototype and it could be that until the bike is finished in production trim, we can’t be sure what shocks the V85 will end up with. But at the moment, they look like WP items. We can see that the bike in the photos is currently undergoing ride-height adjustments with the shocks on show being reduced in static height by 3mm at this stage of the final round of testing.

There’s no dials on the bike in the photos, it’s an LCD screen with a large surround that juts out from the top to cut down on the amount of sun glare that the rider has to deal with, suggesting that it’s not a colour TFT screen on the bike which are easy to read in direct sun. A mono-version of the screen usually suffers from some element of sun glare. The bike also gets a span-adjustable front brake lever. 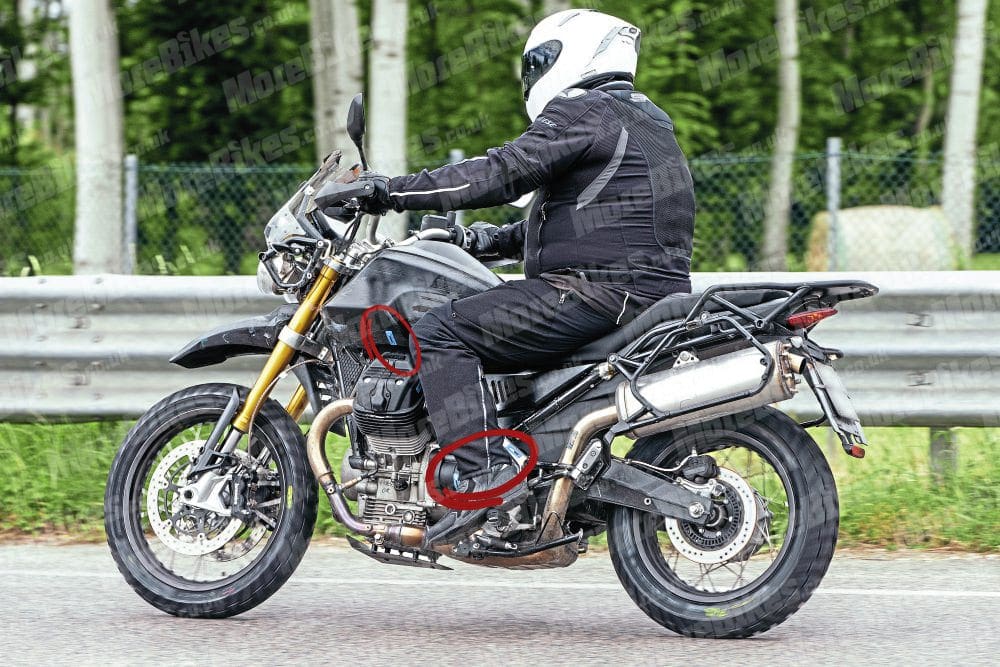 The bike’s switchgear (on the right hand side) is very simple to operate with a thumb-controlled up/down switch clearly shown which will let the rider scroll through electronics on the bike.

Guzzi says that it was so impressed with the public’s reaction to the prototype V85 that the new bike will be as close as possible to how the original looked. Expect the final production version to be shown at this year’s EICMA show in November and will go on sale next January.