Austrian bike-builder Bernhard Naumann has built chopped and changed BMW’s R nineT – and come up with this mental custom project called the Giggerl. 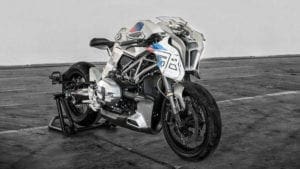 Naumann built the Giggerl on behalf of BMW Motorrad for the 2018 Soul Food event at Neukirchen, Austria. And he’s called it the Giggerl because it reminds him of a chicken (Giggerl is Austrian for chicken). 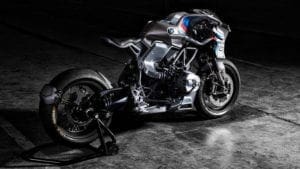 So, how Naumann do it? Well, initially the BMW R nineT was completely disassembled and stripped right back to its naked skeleton. From there, the next job was to modify the frame – chopping off the rear. In fact, there’s very little left of it – the rider sits on a small screwed-on metal structure with a honeycomb seat, and there’s a rear light mounted underneath. The license plate holder has been moved alongside the rear brake caliper. 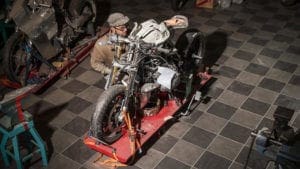 Naumann’s pretty handy with sheet metal, and as a result, created a new metal tank with raised BMW logos, a futuristic front panel covering the steering hub, a front fairing which extends towards the front wheel. The rearview mirrors are also integrated into the front fairing. Like we said. Mad – but cool. What do you think?