The HSR had a good trip to Bolivia – breaking the record for the fastest speed achieved on a 1,000cc naturally aspirated four-cylinder partially streamlined motorcycle, hitting 229 miles per hour. Specific, but still impressive. Plus, the team also reached 242 mph on its modified BMW S1000RR making it the fastest recorded speed ever for a BMW motorcycle. The bike was piloted by Erin Sills who broke her late husband Andy Sill’s record of 221 mph at the Bonneville Salt Flats back in 2013. 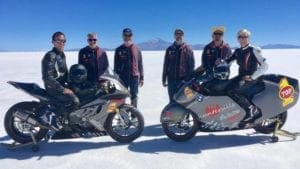 Sadly the 242mph run won’t go in the FIM record books as Sills couldn’t back it up with a second run. However, a 229mph run is still good enough for a record in its category.