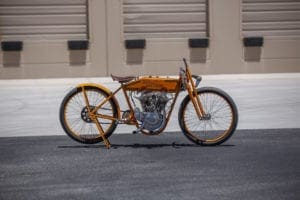 Harley-Davidson ran its first race way back in 1904, competing in The Milwaukee Mile at Wisconsin State Fair Park— but the blossoming American bike builders didn’t really get into racing until 1914. They hired Bill Ottoway from rival Thor, to design a new machine and set up a factory racing team. He built the Model 11-K – a purpose-built track racer with no brakes, no gears, no suspension, a highly tuned motor with open breather ports in the cylinders, and a flat-out racing Schebler carb, all for a $300 price tag. 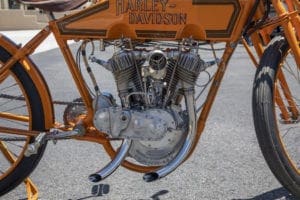 This 1915 Model 11-K is one of only 79, from the glory days of American board-track racing, and has been meticulously restored after being found in a wreck in Argentine. The remaining parts of the original frame were integrated into a new, period-correct frame. The original engine was carefully restored, new wheels were laced to the surviving hubs, and the braced racing forks with rare André dampers were rebuilt. 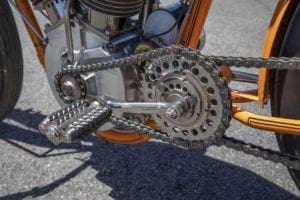