SWM’s new importers 3X Motorcycles has just announced a £500 price reduction for its Six Days 440 scrambler – meaning you can get your hands on one of the retro-styled Italian machines for £4999. 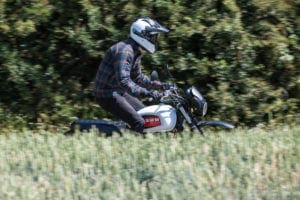 Since its inception in Milan in the early 70s, SWM made a name for itself building a range of innovative, small capacity machines for Trials, Enduro and Motocross. Founded by Piero Sironi and Fausto Vergani in Milan, in reaction to the off-road successes of Japanese manufacturers in the early ‘70s – SVVM (or Sironi Vergani Vimercate Milano) enjoyed some serious success on the world circuit for twenty years, taking titles across a wide breadth of off-road competition.

But it didn’t last. Sadly, SWM went in liquidation in 1984 and production ceased. And that was it for 30 years, until Ampelio Macchi (formerly an engineer with Cagiva, Aprilia and Husqvarna) got his hands on the SWM brand and joined forces with Chinese businessman Daxing Gong – and together they kicked off its resurgence, unveiling six new models at EICMA 2014. Interestingly, despite the Chinese connection, SWM has chosen to keep manufacturing in Italy – and maintain its historic roots to the region, basing the brand at a former Husqvarna manufacturing plant in Lombardia. But that’s enough about SWM’s illustrious if not brief history; let’s get into its latest model, the Six Days. 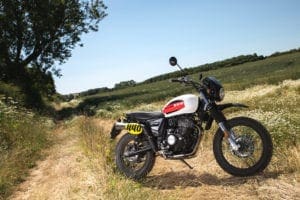 It looks the business, doesn’t it? With styling which harks back to the Enduro machines of yesteryear. In fact, there’s almost a Yamaha XT500 feel to it, with its low, bench-style seat, knobby tyres on wire wheels, twin-shock suspension, gaitered forks, upswept twin exhausts, raised bars and punchy single cylinder powerplant (although it could be because of the similar colour schemes too). Much like the original XT, the SWM Six Days is a fairly basic machine. And that’s by no means a criticism. By basic, I mean it’s simple, straightforward and allows you to enjoy the unbridled pleasure of two wheels and an engine, without the faff of invasive electronics and complicated rider modes.

The Six Days is powered by SWM’s 445.3cc air and oil-cooled, four-stroke, SOHC, four-valve, fuel-injected, single-cylinder engine. It’s a punchy little engine, kicking out 30bhp and 35.8Nm of torque at 5,300rpm – with a top speed of around 80mph. Power delivery can be a little snatchy low down in the rev-range, and the engine is much more responsive if you work it harder. There’s plenty of mid-range torque though, allowing you to accelerate out of corners and overtake with confidence. Basically, once you get used to where the power’s available, the little SWM is a joy to ride. It sounds fantastic too, with a distinctive single-cylinder growl emanating from its twin, upswept exhausts. Its five-speed gearbox and clutch are light and precise too – although finding neutral can sometimes be a bit of a challenge. 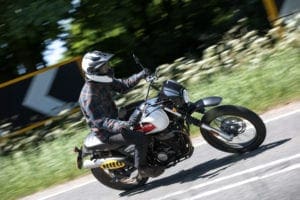 It’s very comfortable, with its upright, relaxed riding position, low seat and wide bars – and because of the bench-style seat, you can slide forward and back to find a comfortable riding position. In fact, I found myself sliding forward to attack the corners. Corners it handles surprisingly well. Despite its 19-inch front wheel and knobbly Pirelli MT-60 tyres, there’s no vagueness from the front end, and it turns lightly into corners and holds its line well at deep lean angles.

The suspension is capable, but as you’d expect, it is not the most sophisticated of set-ups – although it does offer preload adjustment at the rear. In general, it’s fairly soft, which helps offer a comfortable ride. However, mid-corner bumps are likely to unsettle the bike – but because of its wide bars and light weight, it’s not too much of challenge to muscle it into place. Brakes are fairly basic too. Its front single 260mm disc (with ABS) is ample for stopping the lightweight bike, offering decent bite and reasonable progression, while the rear 220mm disc is perfect for smooth filtering and tight turns in town. 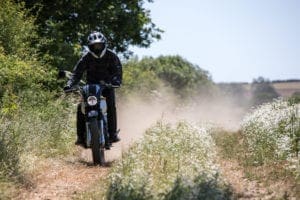 Off-road, the little SWM is great fun. Of course, you can’t expect modern motocross levels of performance – mostly as a result of its short suspension travel. So no big jumps – but it’s quite happy tackling some niggly green lanes and single tracks. It’ll probably surprise you with just how capable it is on the dirt – I know it did me.

Controls are fairly basic, but everything works as you’d expect. It’s tall, circular mirrors are wide and well placed for rear vision, the switchgears are where you’d expect them and its simple dual-pod analogue instrument panel offers a speedometer and tachometer with a small LCD screen showing odometer and one trip meter. There are no fancy extras like a fuel gauge, just a fuel warning light.

If you are after a retro-inspired scrambler, you could do a lot worse than checking out SWM’s Six Days. It’s a stylish little bike that turns heads everywhere you go, and you can ride it on an A2 licence too. In short, it’s a very capable machine, as happy tearing up the trails as it is commuting through traffic – and costing £4999 on the road, it’s significantly cheaper than most of the competition too.