YOU could be fined £100 for going 1MPH over speed limit

Millions of road users could be at risk of speeding tickets, as a result of an official review into the current speeding ‘buffer zone’. 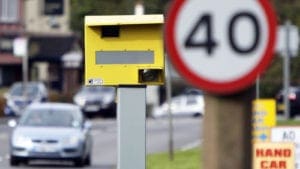 The new proposals would see riders who go one mile per hour over the limit sent to a speed awareness course – while persistent offenders would be hit with a £100 fixed penalty notice and three points on their licence. Riders who break the limit by more could get a court summons, larger fines or even a driving ban.
Riders and other road users are currently given an excess leeway of 10 percent of the limit (plus two miles per hour) before fines are enforced – meaning a motorist in a 30mph zone will only be fined once they reach 35mph.
National Roads Policing Head, Chief Constable Anthony Bangham, has reportedly warned colleagues the present system encourages speeding. He reportedly wrote in a report: “We need to change our messaging and ensure greater consistency of approach when dealing with those who exceed the limit.”
In a paper written to the Chief Constables’ Council, Mr Bangham is reported to have pointed out that road fatalities rose four per cent in 2016 after years of decline.
Bangham said: “The existing speed enforcement guidance (in particular the now publicly stated 10% + 2 allowance) could in fact be encouraging driving at these more dangerous higher speeds rather than the actual speed limits. If properly understood and applied, the guidance may provide forces with the necessary flexibility but over time its rigid application and understanding are often misunderstood, with an expectation that the ‘norm’ is ‘it is OK to speed’.”
However, other police bosses are said to fear tougher rules would be difficult to enforce – in addition to being concerned that there could be a public backlash if motorists feel they are being hit hard with fines. That’s not all; some police chiefs are said to believe that police resources across the country are also too stretched to ensure the new penalties are imposed.
A National Police Chiefs’ Council spokesman said: “Officers have a range of options available to them when drivers are speeding and respond in a proportionate way based on the circumstances in each case. Current speed enforcement guidelines for police set in 2011 are being reviewed looking at available evidence.
“The findings of the review will be considered by all chief constables before any action is taken. There is no proposal for drivers to be prosecuted for driving one mile per hour over the speed limit – that would be neither proportionate or achievable.”