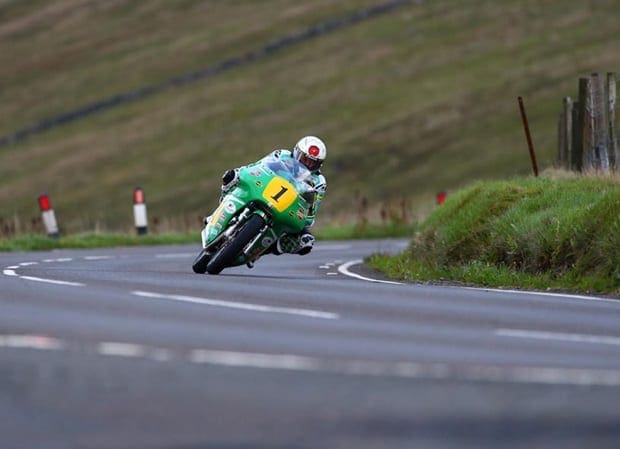 After a frustrating three days kicking their heels while ‘Manannan’s Cloak’ enveloped the island, competitors were finally able to get some much-needed track time at the 2018 Classic TT presented by Bennetts as the TT Mountain Course again reverberated to the unique, ear splitting sound of Classic bike racing.

The session got underway at 6.20pm after the earlier afternoon session had been rained off and although the grandstand was bathed in sunshine at the start of the session, Clerk of the Course Gary Thompson advised riders that there were a number of damp patches around the course, particularly under the trees, which would be highlighted with stationery flags.

The opening session featured the Senior and Junior Classic TT machines, who started from Pit lane, although Lightweight machines were also permitted to run in the earlier session. John McGuinness and Michael Rutter and were first away from Glencrutchery Road on the Team Winfield Paton and the Ripley Land Racing Matchless respectively that they will race in Saturday’s Bennetts Senior TT Race while Dan Sayle was one of the riders who took his Lightweight machine out in the earlier session.

The leading pair made good progress to the first checkpoint at Ballacraine but Dean Harrison, on his Laylaw Racing 250 Yamaha was reported as an early retirement at Ballacraine although he at least managed to get a lift back to the Grandstand.

John McGuinness continued to belie his two-year absence from the Mountain Course with an opening lap of 104.270 and went straight through as did a number of other competitors putting the frustration the week behind them to rack up some vital Mountain Course miles.

However, Michael Rutter was enjoying no such luck, a retirement on the opening lap at the Mountain Box and therefore stuck out on the course and missing out on valuable track time. McGuinness posted a second lap of 106.585 and the Morecambe missile told Radio TT’s Chris Kinley in pit lane after his second lap that it was great to be back on the Mountain Course.

Dan Sayle showed his two stroke talent with the overall fastest lap of the evening (109.406) although gear linkage issues on his second lap forced him to stop at Sulby while Ch