Montana-based Montgomery Distillery has set a new record average speed of 113mph at the Bonneville Motorcycle Speed Trials – on a custom 1980 Yamaha XS850 which has been converted to run on recycled-vodka. 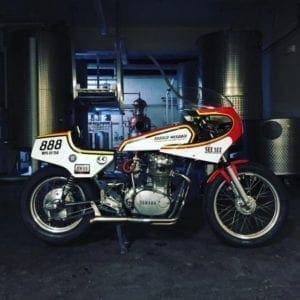 The XS850 custom was hand-built by the distillery’s owner Ryan Montgomery – who reportedly began planning for the event last winter after deciding to try out land speed racing. The bike, which has been named ‘Sudden Wisdom’ after the distillery’s rye whiskey, beat its target of 98mph, achieving an average of 113mph.

The distillery made the fuel by recycling the heads from the distilling process, a cut that is usually thrown away as its impurities make it unsuitable for drinking. According to Montgomery, it does however make a good clean-burning ethanol – as proved by the teams successful runs at Bonneville. What do you reckon? Will we see more alcohol powered machines in the future?