Earlier this week, we showed a selection of images of Mick Doohan’s AWESOME custom Honda CB1000R – and now we’ve been sent some snaps of FIVE MORE one-off Honda specials from the same event. 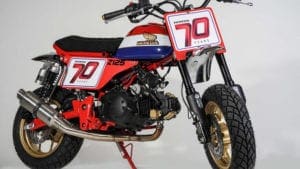 The bikes were on display at the Glemseck 101 near Stuttgart. If you’ve not heard of Glemseck before, essentially it’s a huge German bike show – that has a focus on customs and sprint racing. And this year, Honda was in attendance – represented by SIX super cool custom machines, from a range of bike builders. 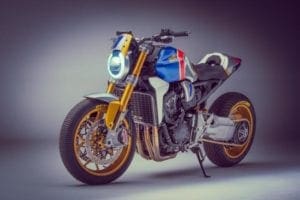 Of course, we’ve already shown you Mick Doohan’s sprint-ready CB1000R with Öhlins springs, an Akrapovic exhaust system, Brembo brakes, a custom swingarm, a special clutch, Rizoma attachments and a tricolor paintjob – which was designed by Louth-based Honda Racing UK. But there’s so much more to see. In fact, there was a second CB1000R on show. Designed by Jens Kratschmar, the by ‘Neo Daemon’ was fitted with reflective vinyl wrapping and a white powder-coated exhaust system. 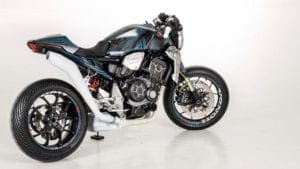 Next up is the flat-tracker version of the all-new Monkey 125. Designed by Dirk Oehlerking of Kingston Custom – the little Monkey has a modified frame, wide Flattracker handlebars, a new exhaust, a special seat, footpegs from a 1976 Honda Elsinore 125 and a tricolour paint scheme. 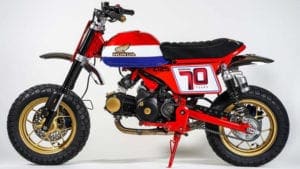 The other three Honda customs are based on some iconic classic machines from the Japanese manufacturers stable. There’s a CX 500, a CB 750 and an old, unfaired Gold Wing. Dutch customiser Roy Holtman overhauled his 70s ‘Wing, changing the tank and seat, adding a two-in-two exhaust system and a rustic military style luggage rack. 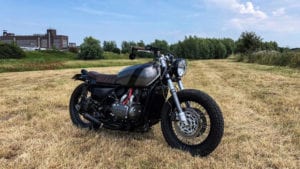 Kaspeed Customs The father and son team at Kaspeed Customs put in some serious work customising their CB750. Altogether, they invested over 200 man hours into the project, overhauling the machine with the help of 3D CAD software – and adding aluminium mudguards, a modified fuel tank and a café-racer seat. 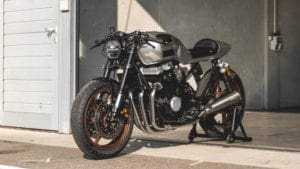 And last but not least is Libra Coachworks’ (based in Dartford) custom CX500 conversion. Among other things, it comes equipped with a quilted leather seat and a custom exhaust system. 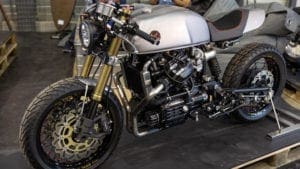